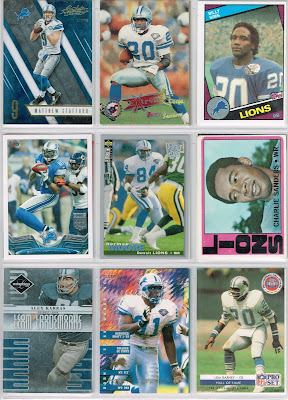 Some franchises have all the luck. And some have, well, none of it. Welcome to the Detroit Lions Frachise 9! The Lions are one of just four teams that have never played in the Super Bowl. Two of those other teams have a history that is not even 25 Super Bowls old yet. The Lions (along with the Browns) have tried and failed to reach the Super Bowl in every single year there was a Big Game. Looking at this list of franchise greats, however, I have to shake my head. The team seems to have had some playmakers in its past. Maybe the problem was that there were never enough of them on the field together.

Stafford was the #1 pick in the 2009 NFL Draft. Honestly, I think he has lived up to expectations pretty well. In fact, one of the various sites devoted to drafts kept him at the top in a 10-year retrospective do-over. That said, Stafford has put up some gaudy passing numbers, but has only one Pro Bowl and three playoff games to show for. Regardless, he is the far-and-away the team's all-time leader in every passing category: attempts, completions, completion percentage, yards, touchdowns, and QB rating. All categories except one: interceptions. Despite throwing more passes than anybody else in team history, after 10+ seasons, he has still not thrown the most interceptions. He does know how to take care of ball. And he has been durable. Until a back injury ended his season last month, he had not missed a start in the previous eight seasons. He has been the one constant for the Lions this decade.

I am still convinced: Barry Sanders is the most talented player to ever suit up. The things he could do with his body were physically impossible. Sometimes I look up old highlight reels, just to be in awe. Here, treat yourself:
When he unexpectedly walked away, he was on pace to become the league's all-time leader rusher. Frank Gore passed him up earlier this year, but in his career he never failed to reach 1,000 yards. In fact, he averaged 1,527 yards per season, with a low of 1,115 (in just 11 games in 1993) and a high of 2,053. There has never been another runner like him.

Barry wasn't the first Heisman-winning running back to wear #20 for the Lions. A decade earlier, Billy Sims earned that distinction. Like Sanders, Sims had a brief, bright career. He played in only 60 games, but still sits at #2 on the team's all-time rushing list 35 years after hanging up his cleats. He is still 4th in total touchdowns. Moreover, there is nobody on the current roster with numbers that are threatening to pass him up anytime soon. His career approximate value per game was 1.05, more than any other Lion. 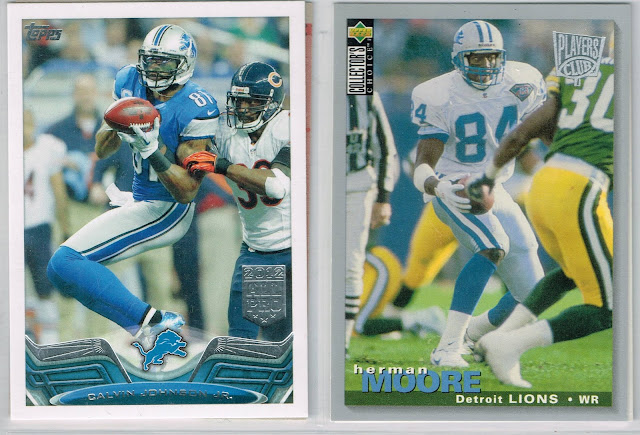 This is starting to turn into a theme: a highly-talented player spends his entire career with the Lions, but walks away from the game while still in his prime. Like Barry Sanders, Calvin Johnson was regarded by many at the best player at his position when he abruptly retired. Megatron needed only eight seasons to become the franchise leader in receptions, yards, and receiving touchdowns. His eight-year career included six Pro Bowls, three 1st Team All Pros, two seasons leading the league in receiving yardage, and one each leading in receptions and touchdowns.

So far, every player on this list played every game of his career with Detroit. We can almost include Herman Moore in that category, too, as he played in one measly game with the Giants in 2002, and the other 145 games with the Lions. He recorded no stats in that one game outside of Detroit, aside from three targets he did not catch. Let's just call him a lifer. Moore is an interesting case. As time has passed, he is not remembered as one of the best receivers in the game, or even of his generation. Much of his career he was solid, if not spectacular. But for a four-year stretch from 1995-1998, Moore was possibly the most productive pass-catcher in the league. That stretch includes three All-Pro nods, the single-season receptions record (123, since broken), and an average year of 104 receptions and 1,314 yards. Keep in mind he did all of this while Barry Sanders was still being fed plenty of carries. Somehow, in the midst of those seasons, coach Wayne Fontes was fired and replacement Bobby Ross led the squad to a losing record over two seasons. I do not understand this team. 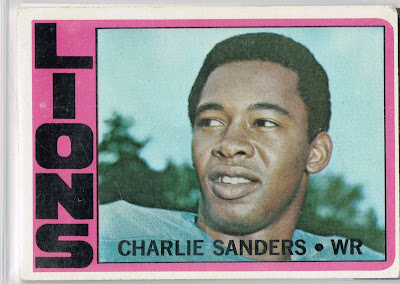 First of all, Sanders is in fact a tight end. His 1972 Topps is listed as a UER. Sanders spent his entire career with the Lions. While he wasn't a top accumulator--his career AV ranks outside the top 20 in team annals--he was elite as his position during his career. As I've mentioned before, I tried to balance the accumulators and the superstars by taking into account both longevity and superiority to peers during the playing career. Sanders has seven Pro Bowls and three All Pro nominations to his name. He has also been in the Hall of Fame since 2007.

Alex Karras ranks 4th on the Lions in career AV, yet he barely made this list. The reason? The majority of his career was before the Super Bowl Era. As it is, he barely squeezed in. Though all of his Pro Bowls and All Pro bids came before the advent of the Super Bowl, his AV after those years was at least comparable, so his level of performance during the Super Bowl Era was similar to the time before. He was quite the character, too, becoming one of the NFL's most unique personalities during his day. He used that to catapult into an acting career after his playing days, with his most memorable roles came in Blazing Saddles and the sitcom Webster. Karras was just announced as a 2020 Hall of Fame inductee.

Robert Porcher may not be a name on the tip of everybody's tongue, but he is the team's all-time leader in sacks and forced fumbles. He is fourth in tackles for a loss. He was a quiet, consistent force on the Lions' d-line from 1992-2003. You guessed it; that was his entire career. He made three Pro Bowls, and his career sack total is better than current big-name defenders like Calais Campbell and Clay Matthews.

Lem Barney spent his entire career with the Lions, finishing that career with 56 interceptions. His interception total is second in team history, while his 1,077 return yards and seven pick-6s rank first for the club. Though he retired over 40 years ago, he still ranks in the top 20 in league history in all three of those categories. His career AV is second behind only Barry Sanders in Detroit history. In all, Barney had seven Pro Bowl nods and made two All Pro teams. He entered Canton in 1992.


This an interesting group. I think this is the only team in which every player selected spent their entire career with the team (we're going to ignore Herman Moore's one appearance for the New York Football Giants). There was a fair amount of hair-splitting, trying to decide between players who aren't NFL legends, like Porcher, Chris Spielman, Dominic Raiola, or Jason Hanson. I also noticed that #20 seems to be the magic number for the Lions--Lem Barney, Billy Sims, and Barry Sanders made Franchise 9 worthy careers while wearing that number. Maybe the Lions made a mistake by retiring it. Maybe they should just suit everybody up in #20 and see if they play at elite levels. I predict that the players would all perform extremely well. . . and the team would still lose.