Last week I was on eBay looking for an affordable box to break, since I'm not really buying any retail right now. I found one (which will be saved for a later post), and in my customary way, searched around for other items the seller had for sale. I came across a "U-Pick" lot of 1970 Topps football and saw there were some pretty good players available and add it to my purchase. With the shipping included, these 10 cards came out to about a dollar apiece.
The highlight of this purchase was knocking off two players from my NFL All-Time Team Project. For this project, I'm collecting one card from each player who was chosen for the NFL's 100th Anniversary All-Time Team this past season. My criteria for these cards is that they must fill one of these criteria: 1) a Hall of Fame rookie, 2) a vintage card (defined as pre-1982 for this purpose), or 3) a serial-number of 500 or lower. I was able to pick up two new cards for this project. 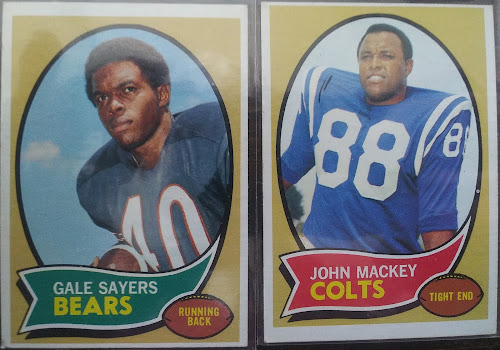 And Gale Sayers is a big one for a dollar. This alone made the purchase worth it to me. It's off-center, but otherwise in great condition. The same can be said for John Mackey. It's even more off-center, but its condition is great. 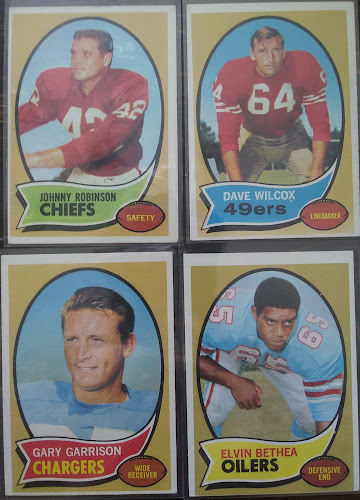 I also tried to pick out a few other Hall of Famers. Robinson, Wilcox, and Bethea are all enshrined in Canton. My favorite card of these four is Elvin Bethea because this is his rookie. Again, an average of $1 per card got me a Hall of Fame rookie from 1970. I'll take it. Gary Garrison is a name I recognized from recent years' Hall of Fame finalists. I don't know much about him, but I know he was a finalist or semi-finalist for the Hall in the past year or two, so I went ahead and selected my first card of him for my lot.

And, of course, I took whatever Packers he had available from the set, too. This is my first Doug Hart card. Up to this point, the only card I had of Gale Gillingham was an All-Pro card he shared with John Hannah. It's a great card--with a Packer great and a Hall of Fame great on the same card--but it's nice to have one of Gillingham flying solo.
Posted by Trevor P at 8:39 AM