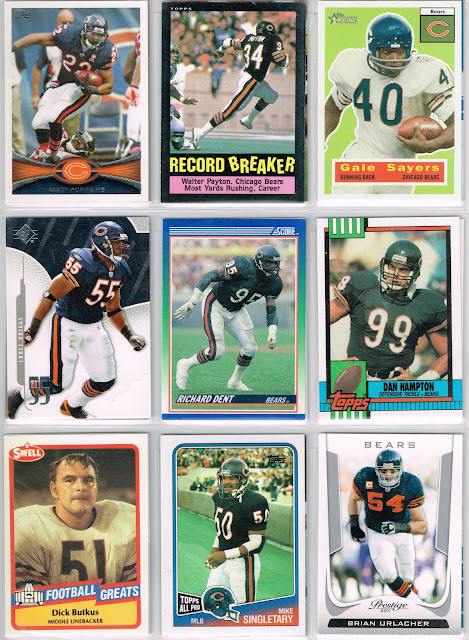 What do you think of when you think of the Chicago Bears? If you thought of defense and the Monsters of the Midway, you probably weren't alone. The Bears ended up as one of only three teams with no quarterback among their Franchise 9. In fact, they were missing a representative from all offensive positions except for running back. Just as it has for so many games at Soldier Field, the Bears' defense dominated here as well.

This was probably the most surprising player to make the cut, at least to me. Throughout his entire career, I always felt that Forte was underrated. I didn't expect it to play out that he was one of the top nine players for Chicago in the Super Bowl Era. But after eight years in Chicago, Forte left the Windy City as the franchise's 2nd-leading rusher. Rushing was only half of his value, however, as he is also 7th on the receiving yard list. In all, Forte gained 12,718 yards from scrimmage and scored 64 times. He also has two Pro Bowls to his name. He may not have put together a Hall of Fame career, but he was productive for nearly a decade.

All Walter Payton did was act as the heart and soul of the Bears' offense for 13 years, becoming the NFL's all-time leading rusher and touchdown scorer in the process. His touchdown record has since been broken, but the rushing record stands. Like Forte, Sweetness was also good out of the backfield, and ranks fourth on the club's all-time receiving yardage list. Sweetness was a nine-time Pro Bowler, five-time All Pro, and NFL MVP. His name should be on everybody's short list for best running back ever.

Of all the people I wish I could have seen play, Gale Sayers is near the top of the list. He had a remarkably short career, but befitting his nickname, it was like a comet--shining brightly and over in a flash. The Kansas Comet played only seven seasons, but was named 1st Team All Pro in five of them. An outstanding runner and returner, Sayers led the league in all-purpose yardage three times and rushing twice. He scored 54 touchdowns, including 6 on returns. He became a first-ballot Hall of Famer in 1977.

Any time a guy spends 12 years with the same team, he is probably going to get consideration as a franchise great. Briggs did just that, from 2003-2014. During his career, he registered 1,174 tackles and 97 tackles for a loss. Both rank as the second-highest mark in franchise history (keeping in mind that tackles have only been counting since 1994). His greatest strength was his playmaking, though. He scored 7 defensive touchdowns, good for third on the franchise's list, and the most by a linebacker. From 2005-2011, Briggs made 7 straight Pro Bowls.

With 124.5 sacks, Richard Dent is far and away the franchise leader in sacks. His best season was 1985, when he was a one-man wrecking crew. That year, he recorded 17 sacks, 7 forced fumbles, and the only pick-six of his career. Not surprisingly, the Bears boasted arguably the best defense this planet has ever seen that same year. They won the Super Bowl on the strength of that defense. And Richard Dent was named Super Bowl MVP.  He was elected to the Hall of Fame in 2011.

Dent's linemate, Hampton, was no slouch himself. Although he played fewer games in his career, Hampton's Pro Football Reference Approximate Value is higher than Dent's. He ranks 3rd on the Bears' all-time list with 57 sacks from his defensive tackle position. Hampton was a four-time Pro Bowler and an All-Pro. He was also named to the All-Decade team for the 1980s and was a member of the 2002 Hall of Fame class.

I don't think there's anyone I would like to face in a dark alley less than I would like to see Dick Butkus. The man brought the "monster" to "Monsters of the Midway." His Hall of Fame career was 9 seasons long, resulting in 8 Pro Bowl and 5 All Pro nods. When Butkus was in the middle of the field, the Bears' defense was considerably better. During his career, the Bears finished with a top 10 defense 4 times. In his last season, Butkus played in only 9 games. For the first time in his career, the Bears finished outside of the top 20 that year. They would finish outside the top 20 in 2 of the next 3 years. He was a true difference-maker.

Six All Pro seasons in row, and seven in eight years. That's a long time to be considered the best at one's position. That's the kind of dominance that Mike Singletary displayed. Singletary ranks second in Bears' history in AV, trailing only Walter Payton. After spending his entire career as the elite of his position in NFL, he was a first ballot Hall of Fame inductee.

Singletary is 2nd in AV. Another middle linebacker, Brian Urlacher, is 3rd. His 1,354 tackles are the most in team history. Like Singletary, Urlacher dominated his position in his career. He made 10 Pro Bowls and 4 1st Team All Pro teams in 13 seasons. If you're counting, in the 48 seasons from 1965 to 2012, the Bears had the league's top middle linebacker 15 times. In 34 of those 48 years, and in all of the 15 All Pro years, Butkus, Singletary, and Urlacher were manning the middle.

This is certainly one of the more interesting teams. With only 9 spots to fill, running backs took 3 and middle linebackers took 3. Thats 2/3 coming from 2 positions! It's incredible to me that through 50+ years of history, this franchise has maintained an identity and strength so consistently. When I think of the Chicago Bears, I think of hard-fought football between the hash marks. Three RBs, three MLBs, and a trio of DL certainly seem to bear that notion out, no pun intended.