I finished my 2020 Opening Day box break, even without a Major League Opening Day. Opening Day is probably my favorite break of the year because it usually nets me a complete set and a good portion of one of its fun inserts in a single box. This year didn't quite get me what I was looking for, but it was a fun break as always. 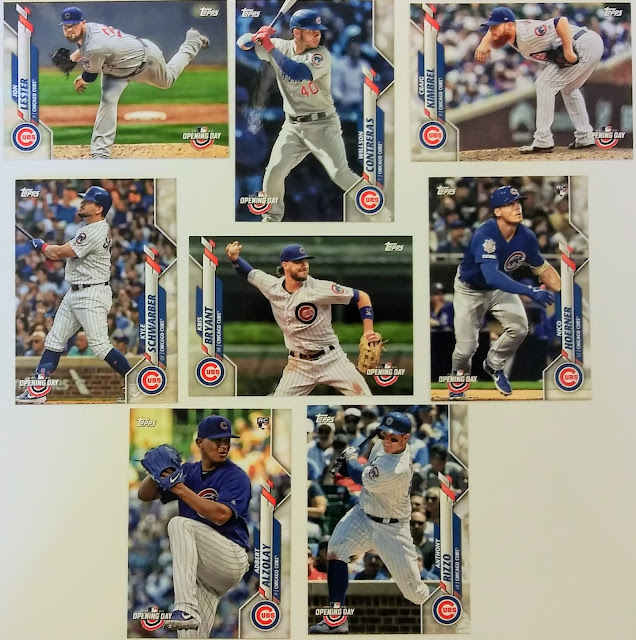 Here is (almost) the Cubs team set. Javy Baez is missing from this team set because I didn't pull a Javy. Right away you can see that for the first time ever, I failed to get a complete base set from the box. Baez isn't the only missing base card; I fell four short of the set. 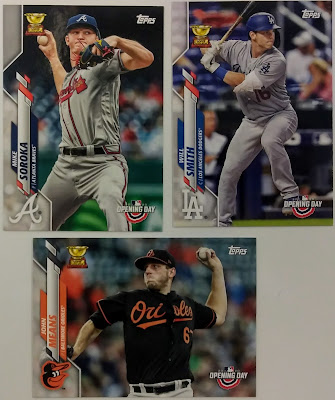 I did manage all of the Rookie Cup cards. Here is our battery of young stars. 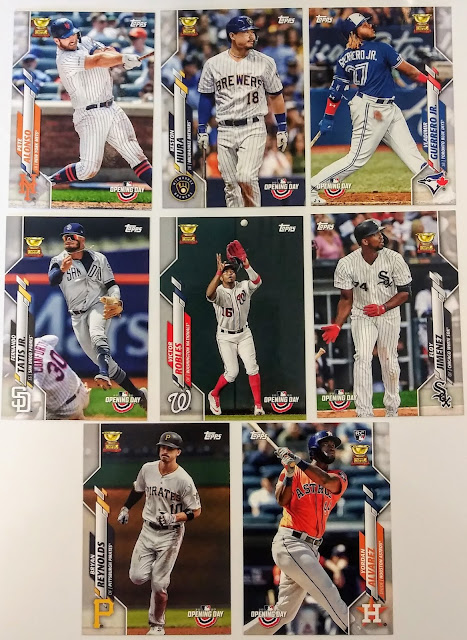 And here is the rest of our lineup. I don't know why, but the Rookie Cup really caught my eye this year. I know it has been pointed out already, but Yordan Alvarez, AL Rookie of the Year, is has the rare RC/Cup combo. 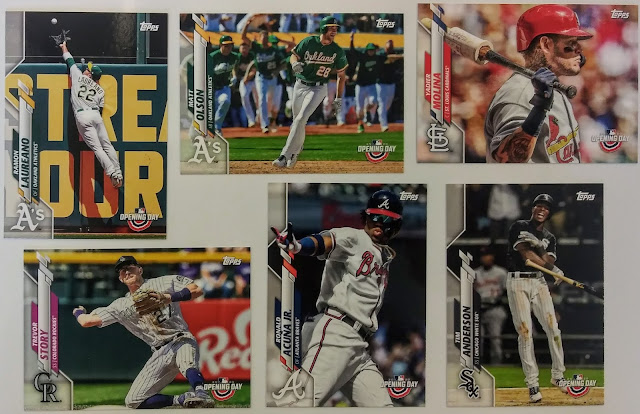 As always, there is some fun photography. I really like that top row.

Now, for the inserts. 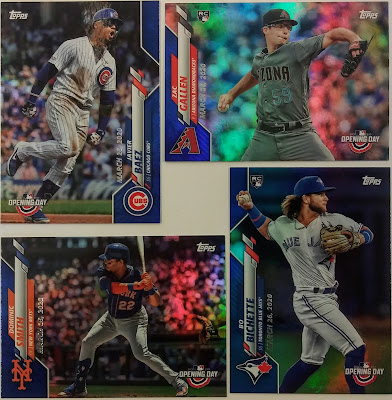 There's Javy Baez! I pulled four blue parallels, and I did pretty well, I think. One blue is my man Baez. Another is the blue parallel of hot rookie Bo Bichette. The other two are available for trade. 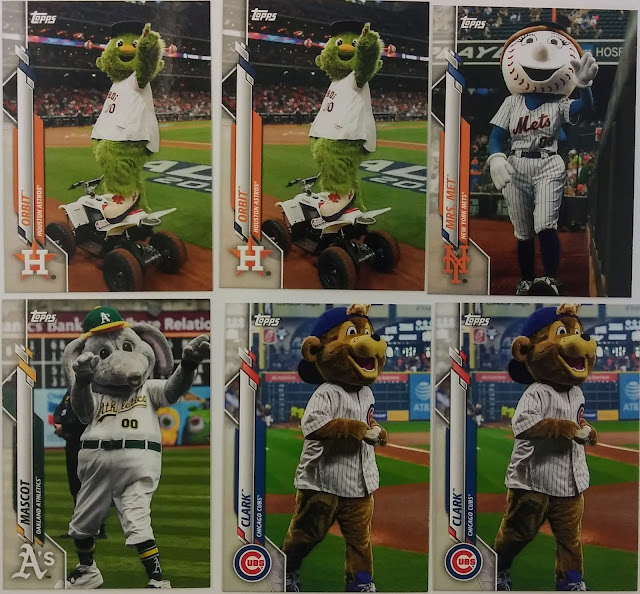 In my first Opening Day post, I pointed out that I pulled duplicate Mascot cards of the Tampa Bay mascot. That trend didn't change, as you can see. All of these are available for trade, minus one Clark for my collection and one Orbit that I already traded away on TCDB. 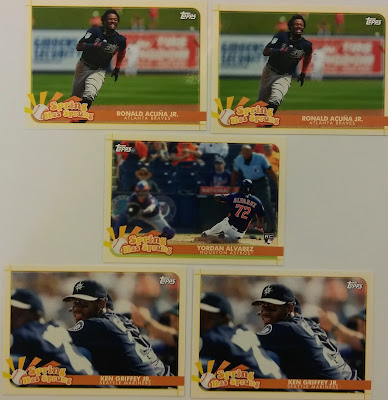 Spring Has Sprung was probably my favorite insert set that I pulled. It's a 25 card set, but one I would have considered building, especially with a starting point of 5 cards from my box. Alas, the duplicate bug bit again. As far as dupes go, these are a couple of good extras to have for trade bait. Acuna, Alvarez, and Griffey all fit in my collection. The Alvarez was probably my favorite pull of the box, since it's a Rookie of the Year collection need for a player who hasn't had a ton of cards as of yet. The extra Acuna and Griffey are both available for trade. 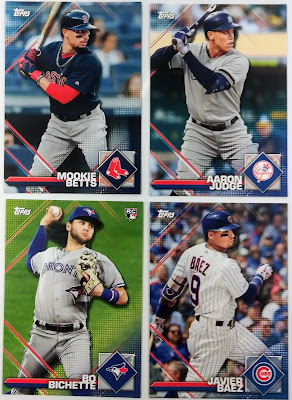 For a couple of years, Opening Day made its stickers the one-per-box hit. Not so this year. This set is a preview of Topps Stickers. This is an excellent crop of players. It's a Bo Bichette hot box! I could almost say the same about Javy, except for the fact that his base was missing. 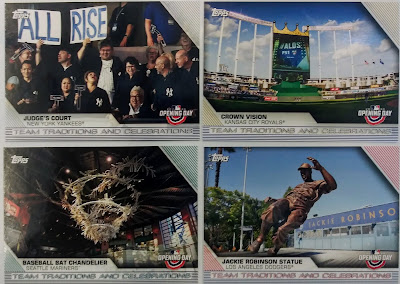 The Team Traditions and Celebrations set has been the insert I've built in the past. I didn't care to build it this time, but I'm keeping the Jackie Robinson statue for my Robinson collection and the baseball chandelier card because it's just so cool. The other two cards are up for trade if there are any takers. 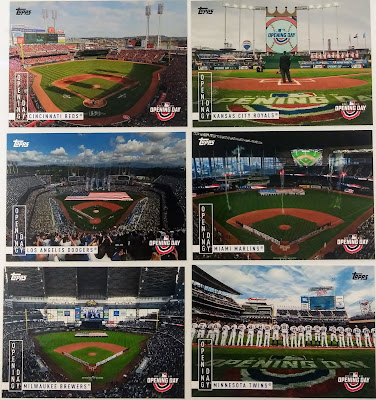 I'm not a huge fan of the Opening Day inserts this year, but by happenstance, I'm going to complete the set. I pulled these . . . 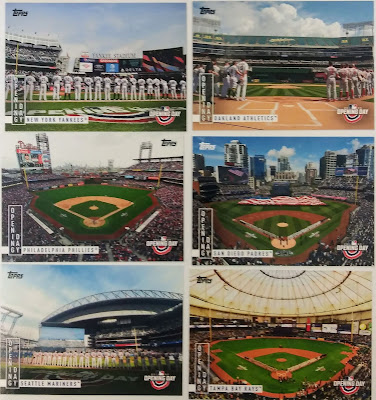 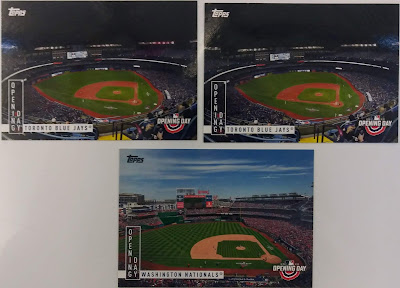 and these. If you're counting, that's 15 total Opening Day cards. There are 15 cards in the set. But you eagle-eyed readers may notice that the dupes have struck again, this time with two Toronto cards. That leaves me one card short (Milwaukee).

The inserts I really wanted were the Dugout Peeks. I knew they were pretty rare, but I didn't know how rare until I saw the odds on the pack: 1:2310. So I didn't pull one of those. I did, however, beat the 1:937 odds to pull my first relic from an Opening Day box. 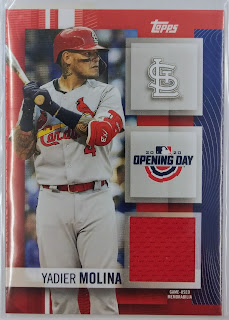 A Cardinal. Normally, I'd be a little more upset about this, but there happens to be a collector of Cards card in Oregon who keeps sending me stacks of Cubs. Now I at least have some return fire. Kerry, this one is yours.

This week is Spring Break for us. Like many others, my job has turned into 100% work on the computer, so I'll be using Spring Break to take a little screen break. This will probably be my only card post of the week. However, it being the week before Easter, I feel the need to make some short scriptural posts that you may see throughout the week. If there has ever been a time in my life that we need Him, I feel it now. Enjoy your week, everyone!
Posted by Trevor P at 7:00 AM