2017 Update is almost done, that is.  For the first time ever, I decided to build an entire flagship set: Series 1, 2, and Update.  I know that 2017 is not everybody's (or anybody's) favorite design, but I decided to make a go for it.  I don't think I'll do it again.  The experience wasn't all bad, but I found that I spent most of my card money on flagship and don't have much else from 2017.  Moreover, I worry about trying to store all my cards if I'm collecting 1000 flagship cards every year, plus whatever else I pick up.  I'll stick with smaller sets, I think.

I finished off Series 1 and 2 before Update was released.  I started in on Update, but I was growing frustrated with my inability to pull Judge and Bellinger.  I knew those cards would be the most expensive on the secondary market, so I was hoping to pull them out of the packs that cost me seven cents per card.  The fact that they both appear three times in the set didn't help.  But I couldn't pull any of them.  When an ebay coupon for some percentage off came my way in December, I decided to use it on a retail box of Update, and came away with 24 packs for right around $25-$30.  Since I was only about halfway done with the set, with none of those pesky rookies in hand and the duplicates piling up, a full box seemed like a good plunge to take.  I was banking on the collation being good enough in the box that I would limit the amount of dupes I would pull while working toward the set.

I was not disappointed.  While I ended up pulling some of the same cards I already had, I didn't have any cards repeat themselves from the same box.  Now that I have finished breaking the box, I stand in need of only 11 base cards.  I'm happy to report that all of the expensive rookies are in my collection.  Interestingly, it took until the very end, when I pulled two Judges and one Bellinger from the same, second to last pack in the box.  What a pack that would have been for an ebay seller in October, when Update first released.

Everyone has seen 2017 Topps ad nauseum by now, and it's not even the current flagship release, so I'll skip the base cards and show the inserts/parallels that came from my retail box. 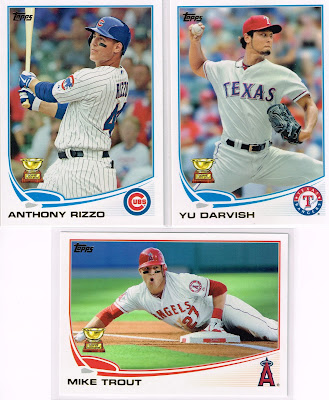 I pulled three Rookie Cup reprints.  Oddly, they were all 2013 reprints.  And now all three of them fit in my collection, thanks to the Yu Darvish signing. 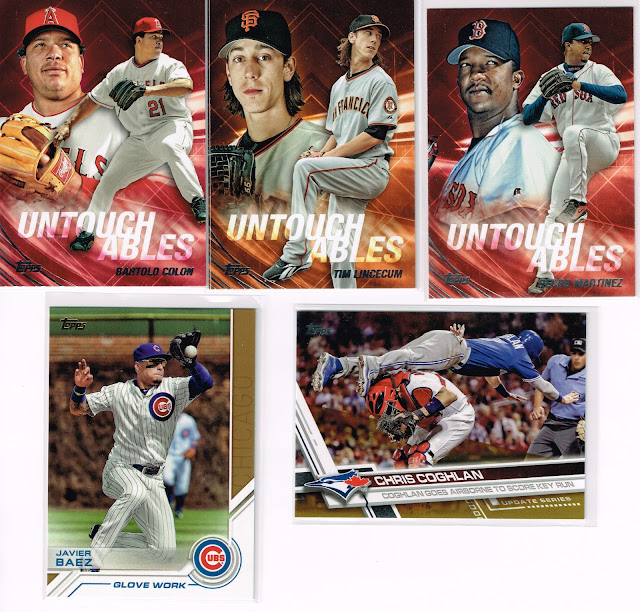 I like the Untouchables set, so even though I don't collect Colon and Lincecum, they'll stay in my collection.  Javy's fancy glove work is a nice insert for this Cubs fan, and this great Chris Coghlan Gold parallel fits neatly into my ROY collection. 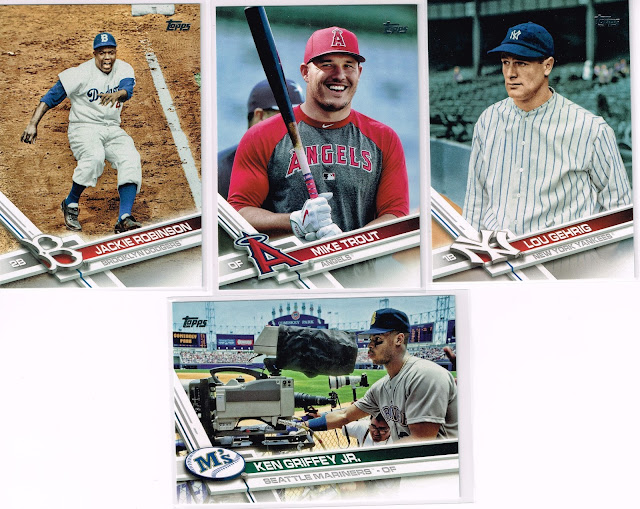 I also pulled five SPs from the box.  I'm keeping these four.  I think it would be hard to top these four players in a random grouping of SPs from one box.  The Griffey is a great photo, to boot.

Now for the trade bait inserts/parallels.  If you want one of these, they are available.  Just let me know. 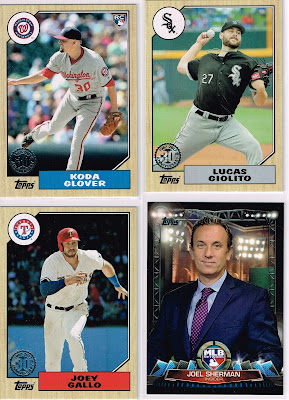 Of the three 1987 inserts in the box, not one fits in my collection.  If they happen to fit in yours, they're available.  The MLB Network set, while an interesting concept, doesn't hold much appeal to me.  Who's building it?

These Postseason Celebration cards look really washed out in the scan.  None of them were too interesting to me, since the set is filled with Cardinals, Yankees, and Red Sox--three teams I find it difficult to cheer for.  The Cubs Celebration card was my favorite of 2017, but this I have an extra now if someone wants it. 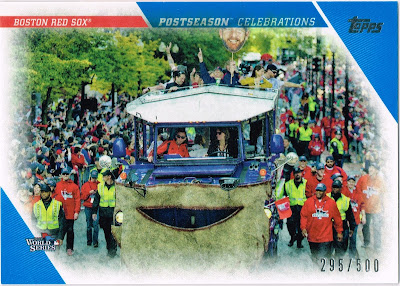 Here is the lone serial-numbered card from the box.  It's blue parallel Red Sox Celebration, numbered 295/500.  It's also available.

I have some gold parallels, if anybody is looking for these.

And finally, a couple Topps Salute inserts and the fifth SP, which I don't plan on keeping.

If you like these inserts, let me know.  As I mentioned before, I'm only 11 cards away from completing three series of 2017 flagship.  These are the Update cards I'm missing:

If you can help me out, let me know.  Here is the list of base trade bait I have, if anybody is looking for 2017 Update.

I'm almost finished with my first ever full run of Flagship for a year.  I'm hoping to close this out before we get too far into the 2018 offerings.
Posted by Trevor P at 12:47 PM No comments:

I have such a backlog of scans that I haven't even started on my Black Friday COMC order yet.  That's okay with me; my collecting has been slowing down so much in recent months that I'm not overwhelmed with too many unscanned, unheralded cards.  I'm just pacing myself and coming up with some good blog posts that aren't necessarily centered around recent acquisitions.

One problem with being so far behind, however, is the fact that the site I used to purchase these cards has been completely overhauled since I placed this order.  I picked up some set needs from Just Commons, which is no longer.  It has since been born again, with a new look and a new name.  Just Commons has been christened Card Barrel, but it's still the same great site.  By the way, if you had unused reward points with Just Commons, just contact the owner of cardbarrel.com and tell him your email and username from the old site and he will transfer your reward points over. 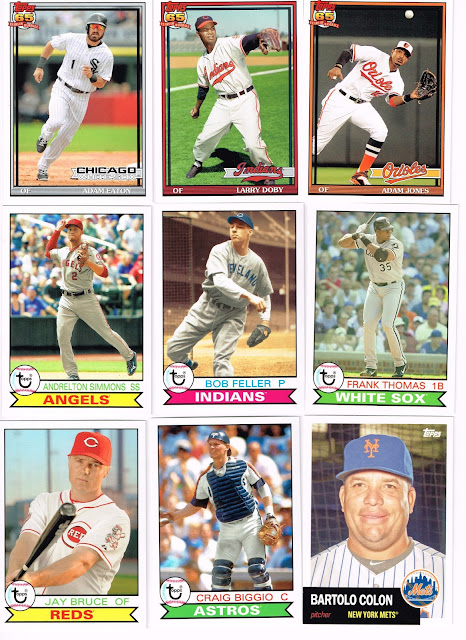 Some more for my 2016 Archives build.  These are my favorite of the lot.  Bartolo Colon and his chins kind of steal the show here.  I have questions about 2018 Archives.  Isn't 1983 Topps due up for Archives this year?  And isn't there a 1983 insert in Flagship this year?  Does that change Topps's plans for Archives?  And what about 1993?  I like the original set, so why am I not so enthusiastic about seeing it done for Archives this year?  So many questions. 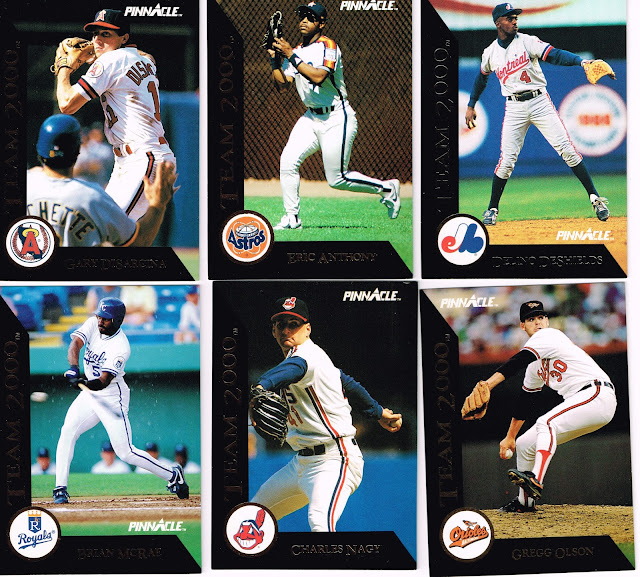 I've mentioned before that the 1992 Pinnacle Team 2000 checklist actually had some pretty decent players.  None of these guys were necessarily the future of baseball, but there are some solid names here. 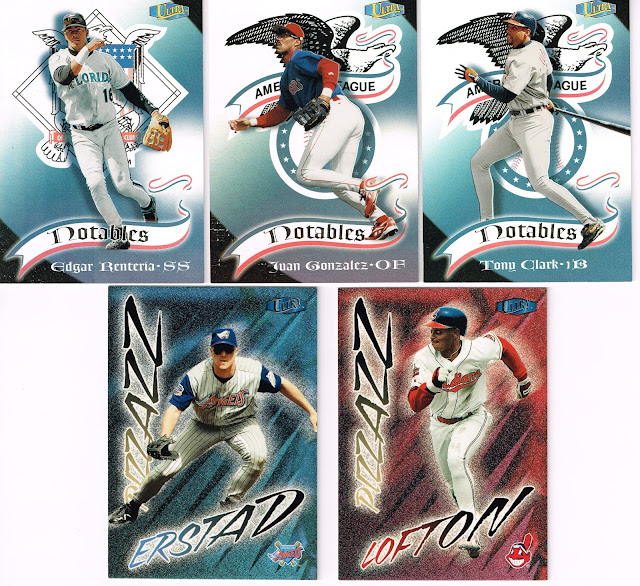 I never opened a pack of 1998 Ultra, but I've got a nice shiny spot in my binder for some of the cards I might have pulled.  I bought a collection off of a guy who had some great late-90s cards, and there was a good partial set of the Notables insert set and the Pizzazz subset.  I really like the Notables cards; I think the design is beautiful and classy.  The Pizzazz screams 90s.  You can't tell from these scans, but the cards are really sparkly, even more so than Topps Metallic Snowflakes from these last two years.  When I decided to go ahead and complete the subset, I didn't realize that I was chasing SPs.  I've found that some of them are more pricey than I typically like to do for a set, but it sure will look nice when I'm done. 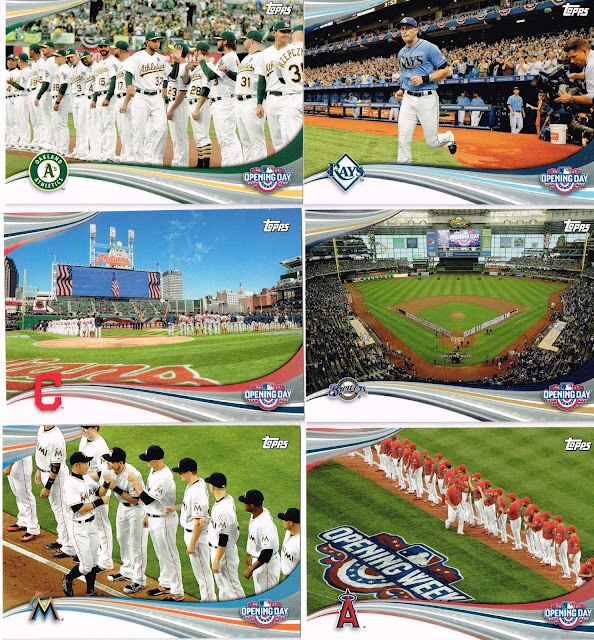 I've already pre-ordered my box of Opening Day for this year.  In the meantime, I'm still putting together my favorite Opening Day insert set from last year.  Opening Day!  Bring it on!  It's only February and I'm already using exclamation points in excitement! 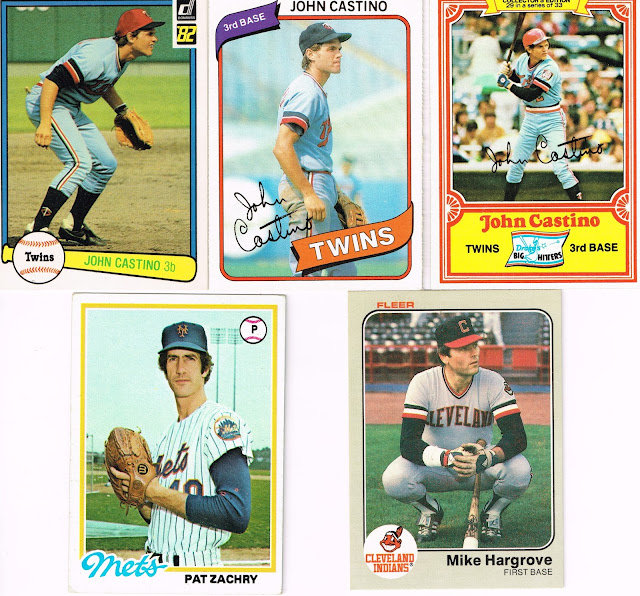 Finally, to round out my Just Commons order, I picked up some former Rookies of the Year who were lacking in representation in my collection.  Cards older than I am and some oddballs on the cheap work for me.

Next time I order, it won't be from Just Commons.  But Card Barrel will probably be my friend and my go-to site for my set builds.
Posted by Trevor P at 6:49 PM 2 comments:

A Couple of Odd Packages

I've been more active on ebay over the past two months than I normally am.  I've just found that with my current collecting focus, ebay has served me better to find what I need than other outlets. I'll be posting a little more about these purchases in the coming weeks.  During my recent ebay shopping, I've come across some oddballs that I've snatched up.  One of these purchases was an oddball set that was advertised as containing Kurt Warner's rookie.  Plus, it was a promo set, so I took a chance on it.

This is what I got: 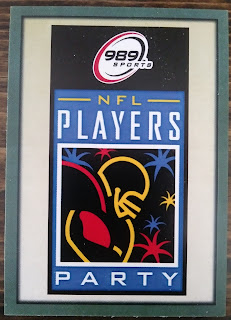 Here is the checklist that met me on the top of the package.  From what I have been able to learn, 989 Sports was a subsidiary of Sony that made video games.  I never owned a video game console as a teen, so I only vaguely recall this.  Apparently, 989 Sports hosted a Players Party before the Super Bowl and NFL players competed in video sports.  The various card companies got in on the action with some promo cards for the party.  I don't know how they were made available.  This set is from the 2000 Players Party and features 1999 card designs.  There are 12 cards in the checklist.

The checklist is pretty darn good.  Here is the aforementioned Kurt Warner "rookie."  I don't truly consider a promo card to be a rookie, but it is the rookie year of a Hall of Famer.  Edgerrin James was also a 1999 rookie.

Here we have Upper Deck, Topps, and Collector's Edge.  I'm not sure which Upper Deck product is shown here, but it will pop up again later.  So will 1999 Topps.

The final three cards are good ones, with Herschel Walker's return to the Cowboys and a John Randle.  Most of the players in this set would fit in my collection otherwise, so I'm happy with the purchase.  I'm tempted to divvy them out to my various player pages, but I'm keeping the set together.

Also from the same seller, I picked up a 1982 K-Mart set, complete with the original box.  I've always liked this cards and the set was on my wantlist, but I hadn't even approached half of the 44 card set.  Now I picked it up all at once. 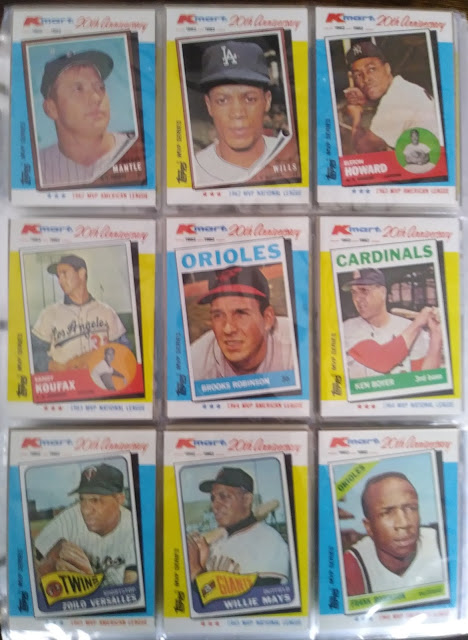 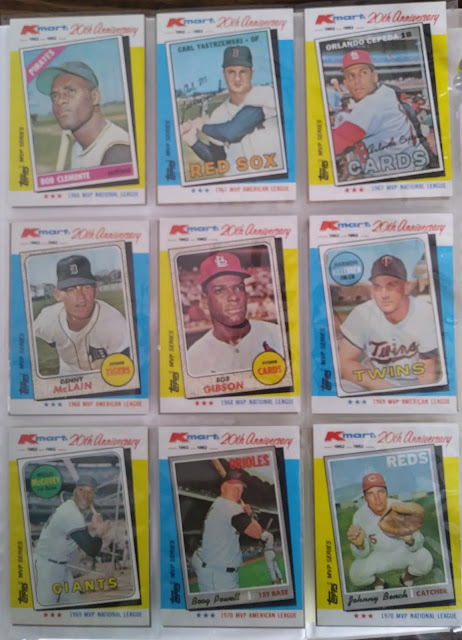 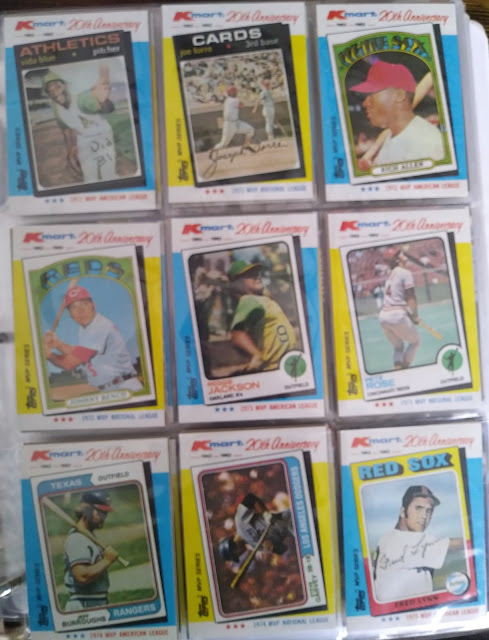 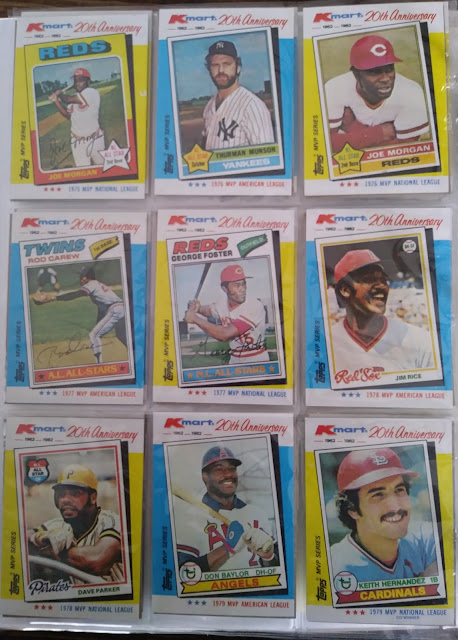 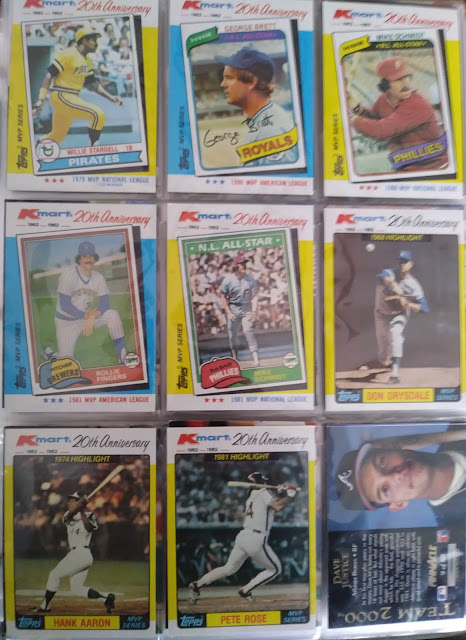 For those of you who don't know (and I doubt there are many who don't), this set commemorates K-Mart's 20th anniversary with the AL and NL MVPs from 1962-1981.  Each card features a picture of their Topps card from their MVP year.  The final three cards mark important records: Don Drysdale's scoreless inning streak, Hank Aaron's home runs, and Pete Rose's hits.

If that package wasn't odd(ball) enough, I recently completed a trade on TCDB that brought me some oddballs.  The entire PWE consisted of 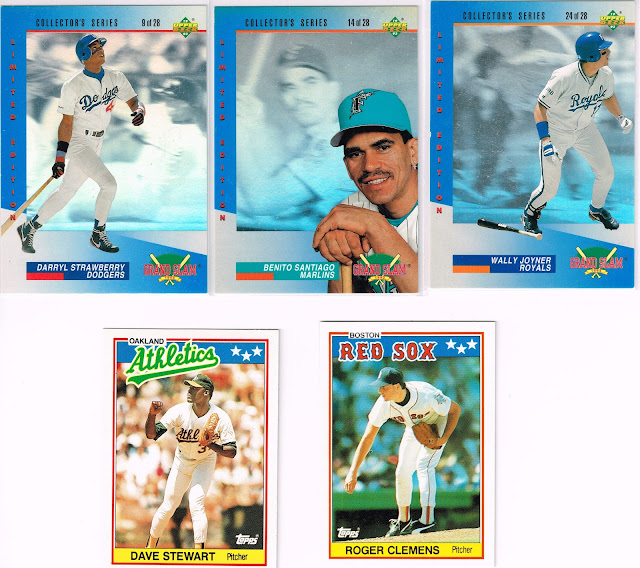 Denny's Holograms and UK Minis.  Now these were some of the oddest packages I've ever received.
Posted by Trevor P at 3:44 PM 2 comments: