A Big Box of Bulldog Cubs and a Contest Question

As a guy whose primary collection is football, I really love to see football cards pop up on blogs. I especially love it when bloggers have football on their wantlists because I have far more football available to send out than baseball. So one of my favorite blogs out there is Nothing If Not Random, run by Roy, AKA Bulldog. I put together a little package of Bills and Falcons and sent them out to Roy to initiate our first trading interaction. What he sent back was absolutely incredible. 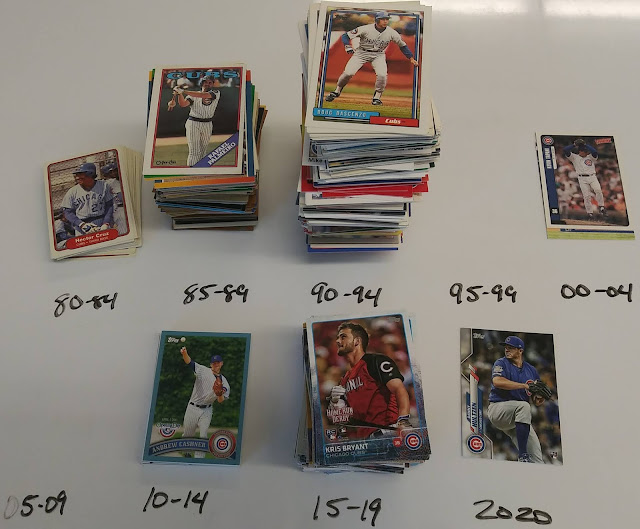 I sent a bubble mailer. He returned fire with an 800-count box packed with Packers and Cubs. Mostly Cubs. Here are all the Cubs of the package divided by five year periods. In all, there were 726 Cubs cards in the box. I can't show them all here, but I have a few highlights.

We'll start out with some 2015 rookie cards of guys who are building pretty successful careers, even if Soler is doing it over in the AL. He's having the best season of the three, as Baez and Bryant are having a pretty rough go of it as we near the halfway point in 2020. 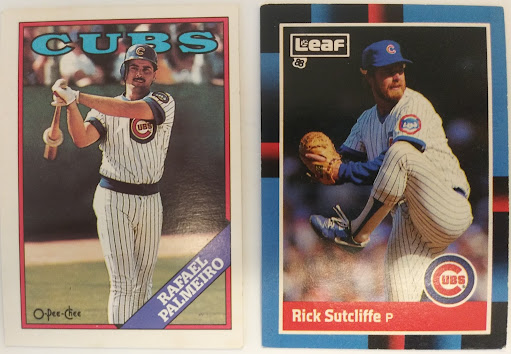 We have a couple of goodies from North of the Border, circa 1988. Both of these guys had pretty successful careers, too. This isn't my first 1988 Leaf, but I do believe this is the only 1988 OPC in my collection. 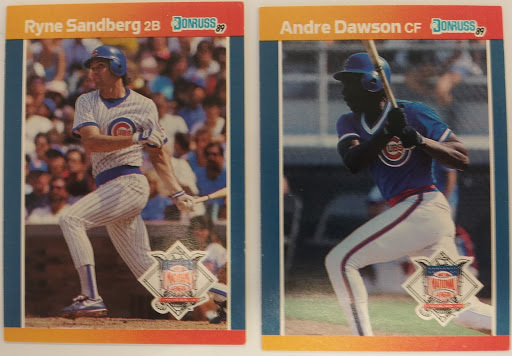 And let's stick with the themes of "pretty successful careers" and "late 80s I didn't have." Somehow, I don't think I ever knew about this All-Stars set from Donruss. I'm embarrassed to admit this to fellow collectors, but I'm happy to have added the Cubs from the set, and two Hall of Famers, to boot! 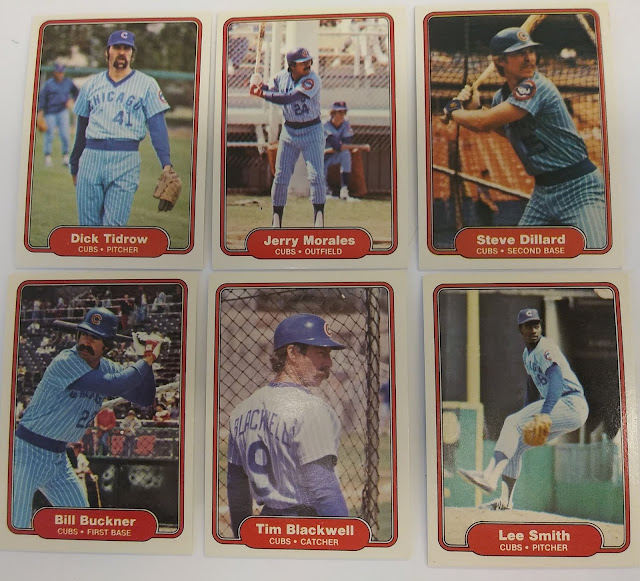 Speaking of Hall of Fame, Lee Smith is now in the Hall of Fame. These other guys all belong in the Facial Hair Hall of Fame, though. That 1981 Cubs squad was stacked mustache firepower. 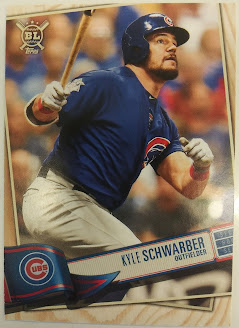 Roy even managed to give me some set help. This Schwarber will go into my 2019 Big League build, which is crazy that I'm even still working on it. 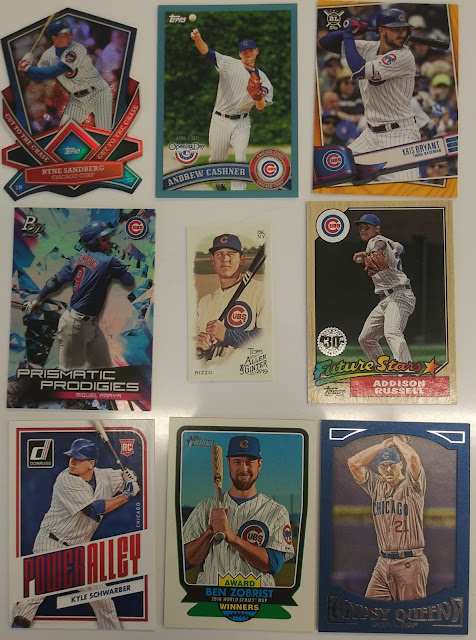 There were a few inserts and parallels in the box. The die-cut Ryno looks really nice in-hand, but my favorite has to be the Zobrist Award Winner. How can I not love a card celebrating a Cub winning World Series MVP? It seems like so long ago now. This year's version of the Cubs has a pretty good record, but unless some bats start heating up, they won't be able to win it all again this year. The pitching has been pretty incredible, though, especially Yu Darvish. 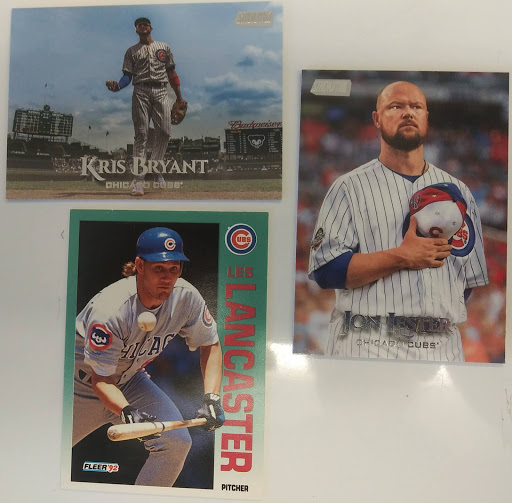 I would be remiss not to highlight the legendary photography of Stadium Club. . .  and 1992 Fleer? Seriously, that Lancaster is awesome. Pitcher at the plate? Check. How about having him bunt? Okay. What about having the ball in the air, in the frame, with his eyes glued to it? You got it. Great card there.

Besides 92 Fleer, there is another set I would like to take a closer look at in this post. Of all the early-year Upper Deck sets, 1992 is the one I've really seen the least. But flipping through this package, I found that there is a lot to love about this set. I mean, you can see not one, but two bunts above and a player brushing his teeth in the dugout. But I found the backs of these cards is where the quirkiness of this set really comes to life. 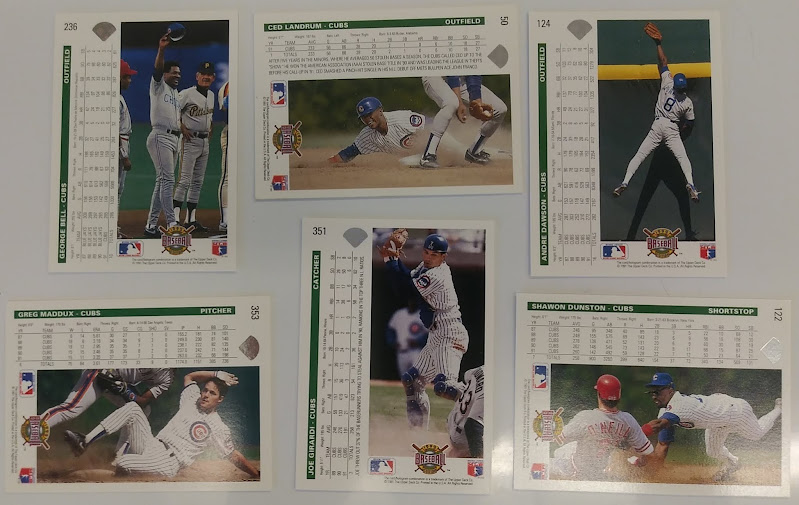 Just look at how interesting these photos are. Jorge Bell tipping his cap during All-Star Game introductions. A helmetless Cy Young winner sliding into base. Shawon Dunston trying to make a diving tag on Paul O'Neill or Joe Girardi trying to pull the ball down in time to make the out at the plate. Then there is Andre Dawson spread-eagle (or spread-hawk in this case?) to rob a home run. Although, I can't tell if he made the catch or not. These are all great. 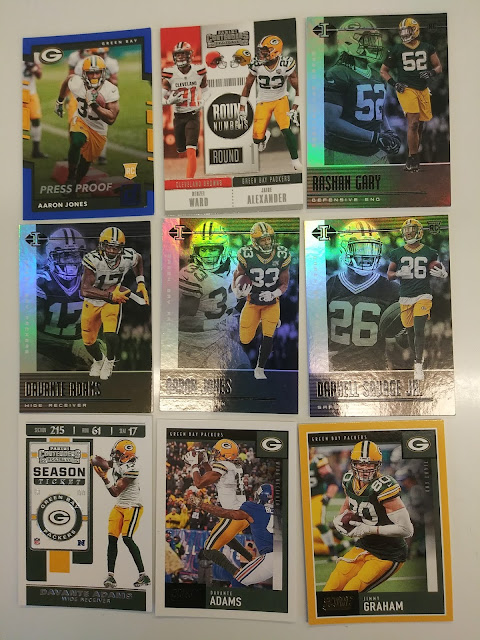 I started this post by praising Roy for his many football-related posts, so I can't leave out the Packers from the box. I'll take a Press Proof of Aaron Jones's rookie card any day. This is my first look at last year's Panini Illusions, and they're pretty impressive. They have a Fleer Flair or Topps Gold Label look going on. There's nothing wrong with either of those two brands. 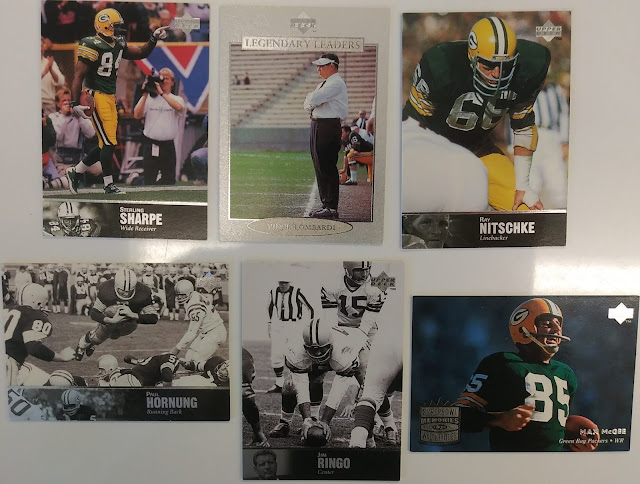 These Packers will all go into a set build. I needed all of these for my 1997 Upper Deck Legends set. I still have a few needs for this posted on my wantlist, but I'm getting closer.

In the box, there were 43 Packers. 25 of them were new to me for a success rate of 58% being cards I added to my collection. Now we're going to play a little game. There were 726 Cubs cards in the box. I want you to guess what percentage of those 726 cards were new to my collection. Just leave a comment on this post with your guess by 11:59 pm on Thursday, September 3. The person whose guess is closest will get a little prize package from me.

Thanks, Roy for the generous mail-day. I certainly hope we end up trading again in the future.

Of the 726 Cubs Roy sent me, what percentage was new to my collection?

Allow me to tell you a tale that illustrates a set-building endeavor. It features adventure, excitement, romance (well, maybe not romance), and frustration. And a cliffhanger--will it ever be completed?

Since my last post six weeks ago, I've probably spent a total of 1 hour with my cards. Our move and renovation proved to be bigger beasts than I anticipated. As of this writing, we have only been living in the new house for about 10 days. We have several big projects that are still awaiting completion and numerous small ones about the house and everything just feels incomplete. My collection is still sitting in the garage, untouched since the boxes were set there a month ago. 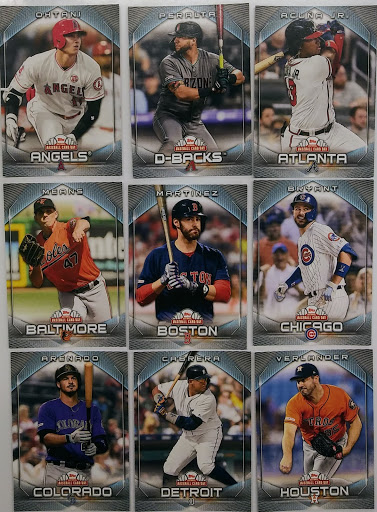 In the midst of all this, I did manage to participate in National Baseball Card Day. More than once, actually. On August 8, I went to my new LCS. I mean "new" in a couple of ways. First, it's now the closest card shop to me, whereas it wasn't before. Second, it has only been open about a year. This card shop, called Venue Sports Cards, is unlike any other card shop I've seen. Phil, the owner, doesn't have a large inventory. There aren't many singles sitting beneath the glass, and there are no monster boxes of cards stowed behind the counter. Neither are there boxes and boxes of unopened material. There are boxes and packs beneath the glass, but it's not a huge selection. It's clean, orderly, and somewhat empty, truthfully. I think business is coming from some grab bags, team packs, and various signed memorabilia for sale. 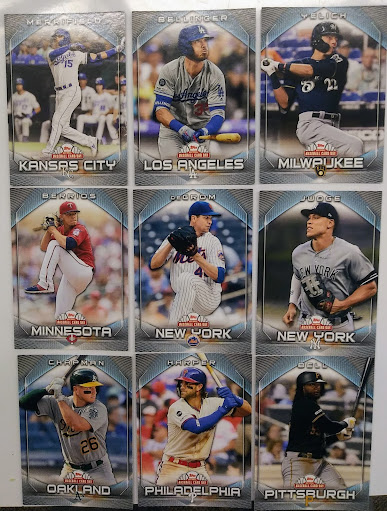 When I walked into the shop just before closing time on National Baseball Card Day, Phil was all too happy to give out some packs. I think it helped that I was to be the last customer of the day, because when I bought a box of 2020 Big League (still unopened), he gave me three packs of NBCD cards and three copies of the Pete Alonso Bonus card. I made sure that each pack had somebody different showing on top. 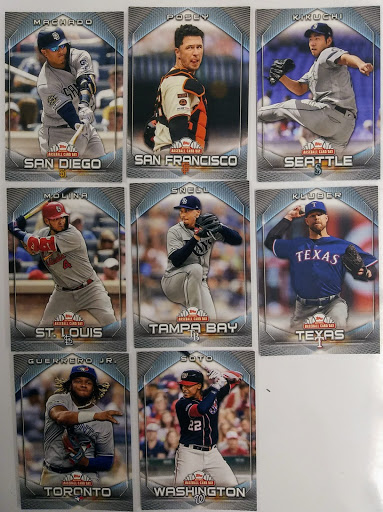 But I didn't get a chance to open those packs for a week. The following Saturday, I stopped in again for another round. This time, he gave me four packs and both the Mike Trout and the Yordan Alvarez bonuses. With seven packs now in my possession, I decided to open them. I discovered something that someone else already put on his blog: there was a predictable order to the packs. My packs all had the highest-numbered card showing on the outside, and the other four cards counted down in order from there. The one exception was John Means at #4 counted down to #1, then a randomly numbered card rounded out the pack. I'm not sure which one it was.

All of this together left me with 26 of 30 base cards and 3 of 3 bonus cards. The set was within reach! With the pattern in mind, I made one more trip yesterday to Venue Sports Cards. I told Phil how close I was to the set and he let me choose another pack. Three of the cards I'm missing are 7, 8, and 9. I found a pack with Miguel Cabrera on the front, #11. I figured the pattern was 11, 10, 9, 8, 7, and BINGO! I would have three of my four missing cards.

Instead, the four cards underneath were 27, 28, 29, 30, then random #11 Miggy on top. So I'm still the same four cards short. Here's the tough pill to swallow: one of the cards I'm missing is Luis Robert. Of course, it has to be the most expensive card in the set that I failed to pull from packs. To thank him for his generosity, I paid more than I should have for one single from the shop. This shiny Aaron Judge, which will be the first serial-numbered Judge in my ROY collection. 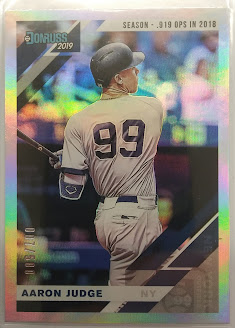 But I'm definitely going to try to finish it off. I've never picked up more than a handful of NBCD cards in a year, so this is a fun chase for me. If you have any extras you'd like to trade here are the four I need:

And I have these dupes in exchange:

It's good to be back, even if I'm not doing much with my collection while I get caught up on the house and wrap up the first week of school. When I can get back to it, I have a box of 1991 Fleer, a box of Honus Bonus, and a hobby box of 2020 Diamond Kings to crack open. I was able to pick them all up for pretty good deals. And the Big League from Venue, too. Just a little more time, I hope.