I got an unexpected package the other day, postmarked Peoria. I immediately knew who (lookin' at you, Tom), but I had no idea what. I assumed some pretty, new Cubs, but it turned out that Tom went away from the diamond and onto the gridiron for this package. Every card inside was not blue and red, but green and gold. The note he included indicated that at least of these cards were card show pickups. 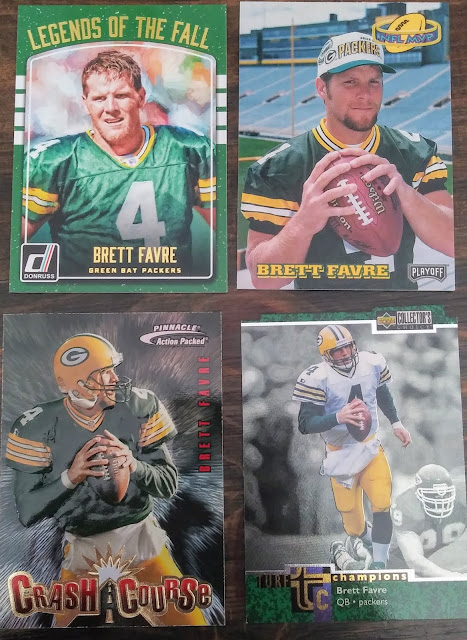 A trio of Brett Favre inserts and a special Packers set from Playoff is an excellent way to start off. I'd never seen this set before, but TCDB tells me that it's 1997 Playoff Green Bay Packers Super Sunday. Pretty cool. And I honestly had no idea that Action Packed was still making cards in 1997. 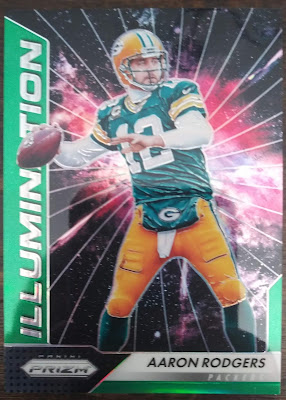 From one QB legend to the next. Such is the rough life of a Packers fan. Not only is this a cool looking insert, but it's a Green Prizm parallel, to boot. Green parallels of Green Bay are always welcome. 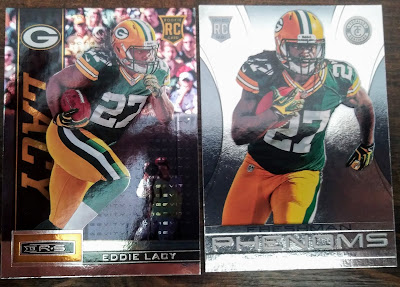 Eddie Lacy remains one of my favorite Packers of this decade. For some reason, I'm especially drawn to rookie cards of him, so these two are nice additions. Fun fact: the Rookies and Stars is a parallel of a base I already owned, while the Totally Certified is a base when I already owned a parallel. 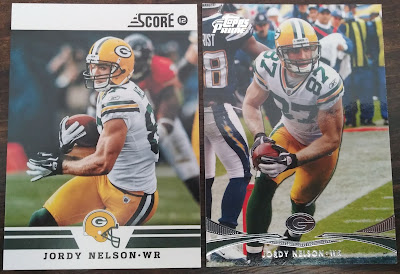 Of course I'll take Jordys that I don't have. I know I've mentioned it before, but I love Topps Prime. The only problem I have with it is that I have a hard time telling years apart. This particular card is 2012. 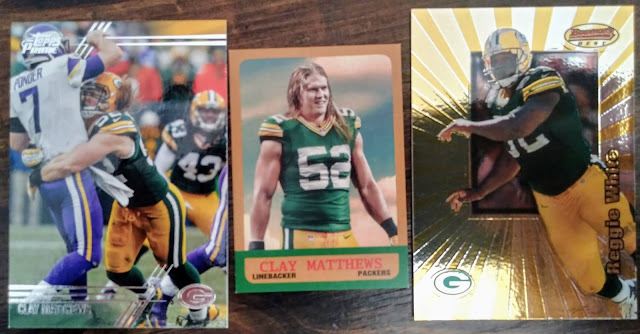 And the Clay Matthews is 2014 Topps Prime. The mini in the middle was one of only two dupes I got from Tom. 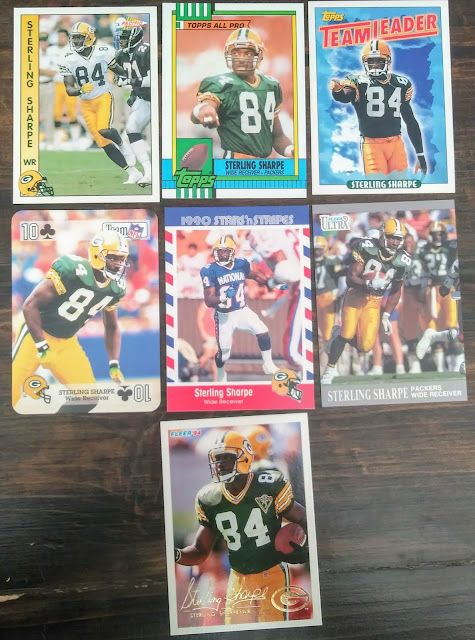 The other dupe came from 1990 Topps (the disclaimer version). My Sharpe collection has been quietly growing, until now he ranks #15 in my collection (source: TCDB). 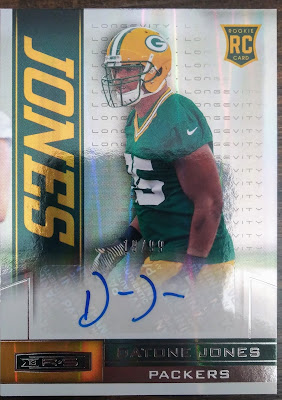 Datone Jones was the Pack's first round pick in 2013. He didn't really become a force on the defensive line, but did start 60 of 64 games over the next four years, so it wasn't a horrible pick. This is my second autograph of him, but the first one that is numbered. This one goes to 99.

Thanks for thinking of me at the show, Tom. It always nice to know that somebody is keeping you in mind. It's a mighty generous return for the humble PWE I sent you. The blogosphere is full of good people, people.

On a side note, I'm planning on taking this blog dark for a little while. I expect to be gone about a month, but it could be more. This time of year gets crazy for me for numerous reasons, and I've decided beforehand to take this one thing off my plate in an attempt to focus in on other things. I've probably gone that long without posting before--I've never been a really regular poster--but that was always unintentional. Since I know now that I'll be trying to free up some time and some brain power, I thought I'd give a heads up on the off-chance that anybody noticed that my sporadic postings started to peter out.
Posted by Trevor P at 7:52 PM 4 comments:

I really enjoy trading cards with people. By far, most of my trades are done on the Trading Card Database. However, I always prefer to trade with bloggers when I can. I think this is because I feel like I know the bloggers. I've read your musings. I understand why you want the cards you do. I feel like a member of a community that is always trying to help each other out. TCDB, on other hand, sometimes feels like a tradelist to mine. I know many of the people there are great, and I enjoy reading the forums, but I still don't feel as if I know TCDB collectors the same way I know bloggers.

Well, when AJ, the Lost Collector, wrote a blog post about joining TCDB, I immediately looked him up. I've never traded with AJ, but I thought this would be a pretty easy way to reach out. Plus, it was a best of both worlds situation--I would be trading with a blogger, but also have the assurance that the cards I was sending would be ones that he wanted. Because, for all the great things about trading with fellow bloggers, there is always the risk that the cards I send might not be wanted/needed. In AJ's case, I was fairly certain that I wouldn't have any Tinos for him, but thought I might have some other Yanks.

It turns out that I did have a handful of Yankees to find a home with the Lost Collector. I sent a few cards, including a Gleyber Torres rookie and an Aaron Judge insert in exchange for some 2019 Big League set help. 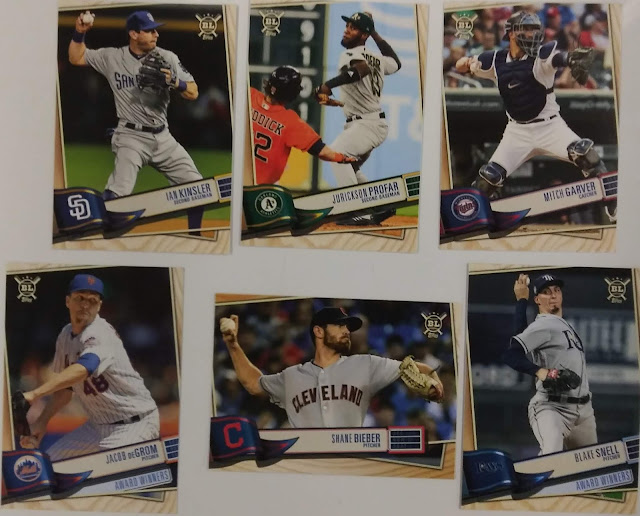 Sometimes baseball players need to throw the ball. Like these players here.  Throwing the baseball. 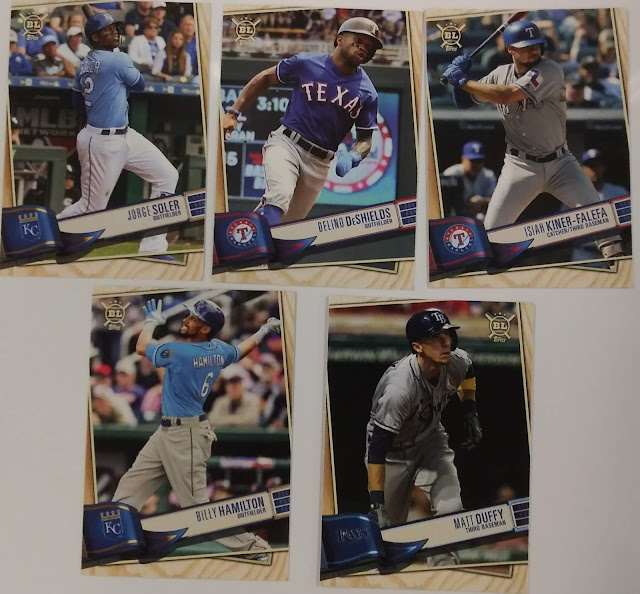 And sometimes players have to hit the ball and run. Whether they're throwing, hitting, or running, all of these cards bring me a step closer to my Big League set.

Thanks, AJ! It was good to finally trade with you--mere years after I started following your blog.
Posted by Trevor P at 4:41 PM 4 comments: