One Thing Led to Another, and I Made an Ebay Purchase

Have you ever tried to trace your thought process, how your brain wandered from one thought to a completely different thought?  Perhaps I'm alone in my quirky head, but I sometimes find it bizarre to see how one thought led to another, which led to another, which led me to pause and think, How did I get here?  And then I committed an ebay purchase that when it arrived, I thought, How did I get this?  All the cards came from the same seller, but there were six separate lots I bought, with a bit of a range between the contents.  Yet somehow, I jumped from one lot to another and ended up with a big purchase from one person.

Where this started was one of my periodic searches for players whose names might have been misspelled, which could eliminate some competition for auctions.  This time, I searched for "Aaron Rogers" and came across these cards. 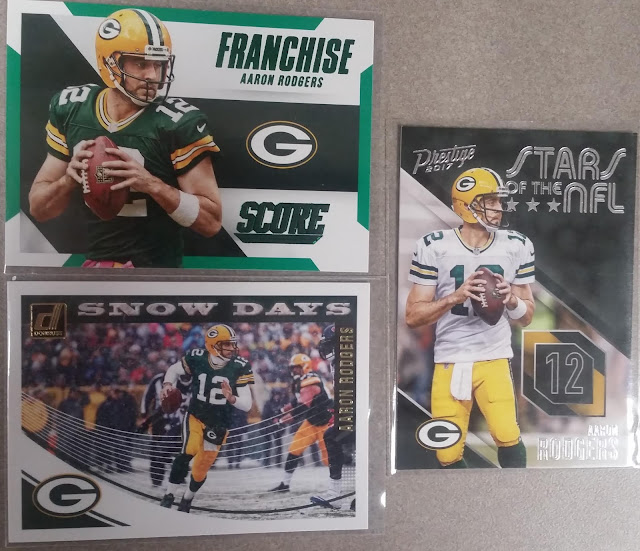 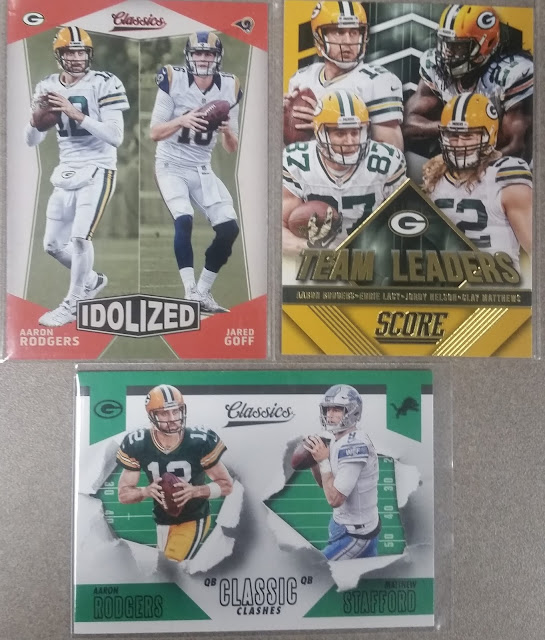 I needed all of these.  They're all inserts, which is cool, and there are even some parallels of inserts, like the green Score Franchise above.  I'm not a huge fan of shared cards, but the Team Leaders with two of my favorite players to collect--Jordy Nelson and Eddie Lacy--is really nice to me.

These cards were for sale by auction, but they also had a best offer option.  So, just to throw something against the wall and try to get a good value per card, I  made an offer for a little under the starting bid.  When he accepted it, I did what everybody else does: I started looking for other items from the seller to combine shipping and justify the postage. 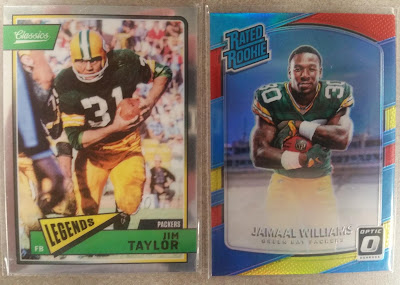 I decided to stay on the Green Bay track.  First, I found a single Jim Taylor.  It's from 2018 Classics, but it's shiny and chromey.  I had no idea what it was.  It turns out that it's called "Optichrome Premium" and I found it cheaper on ebay than I would have found it on COMC, which is usually my barometer.  I count that as a win.  Then I found my current favorite player, the guy who once made my son dance with him for an autograph, former BYU Cougar Jamaal Williams.  It's a nice Red & Yellow Prizm from Optic.  It was actually part of a lot of four Red & Yellow Prizms.  The other three
are sitting in trade stacks that I will send someday.  Like the "Rogers" lot, I made an offer on both of these just below starting bid, and received an acceptance almost immediately.

Having exhausted the seller's offerings of football cards, I switched my search to baseball. 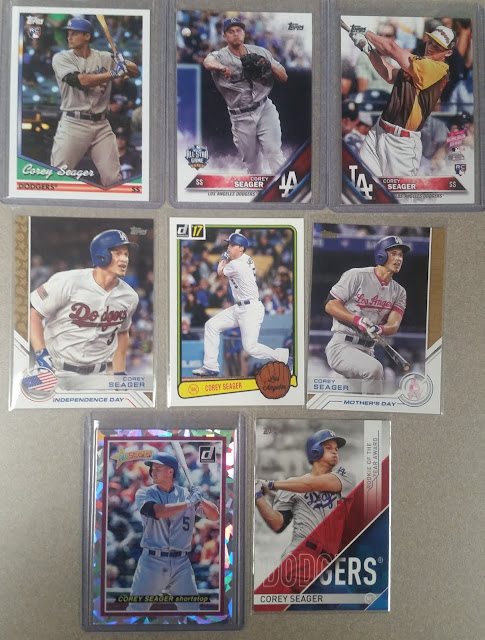 The first thing I wanted was a lot of Corey Seager for my Rookie of the Year collection.  I needed seven of these eight cards, with only the Award Winners in the bottom right already in my collection.  A couple of these cards I had no idea what I was seeing.  In the top right, in the 1994 Topps design, is a Wal-Mart Exclusive rookie SP from 2016 Update.  The cracked ice effect in the bottom left is from 2018 Donruss.  It's the All-Stars set, but a "Crystal" parallel.  Here's what I don't understand: the All-Star inserts are serial-numbered, but this parallel is not.  I have no idea if the print run is higher or lower for the Crystals.  It's a nice-looking card, even if it is Panini. 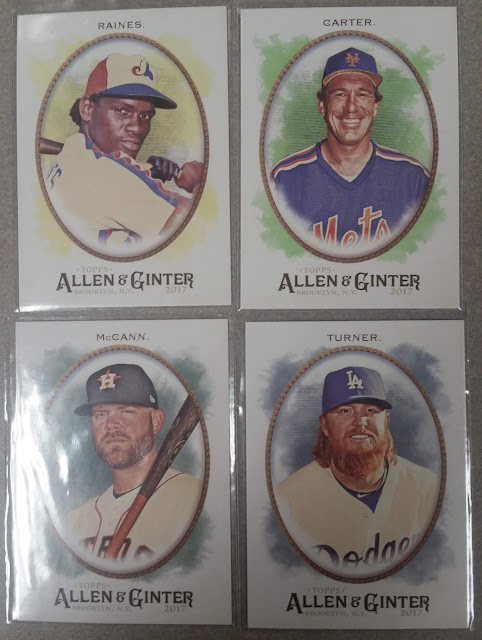 From ROY, I made jump to All-Star MVPs.  I found these four A&G SPs, and 3 of the 4 fit nicely in my collection.  The odd man out here is Justin Turner, who is possibly my current least favorite player. (I've seen him deal too much damage to the Cubs for me to enjoy watching him play.)  It's available for trade, if anyone wants/needs it. 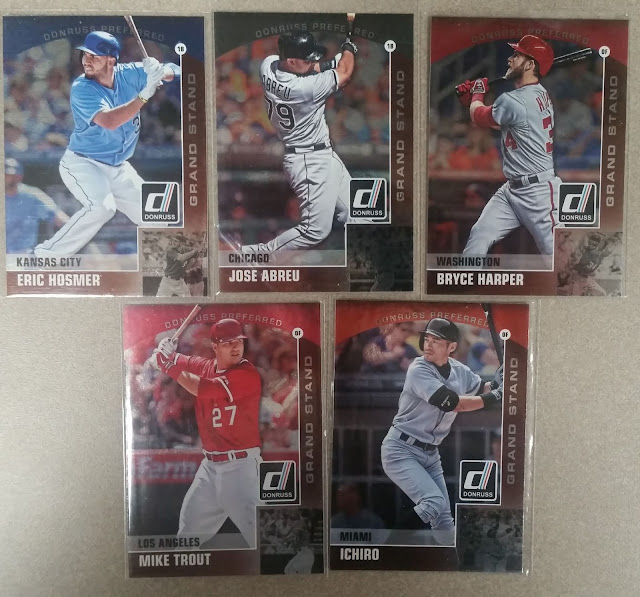 The final lot was another set I had no idea what it was, but it looked kind of cool.  This is 2015 Donruss Preferred.  I bought the lot for these five players.  This was the only purchase that the seller did not accept my offer.  He countered with the price of the starting bid, and I thought it was fair.  Already he had given me all the other lots at less than starting bid.  This one he obviously just felt the value was enough to at least get what he was asking. 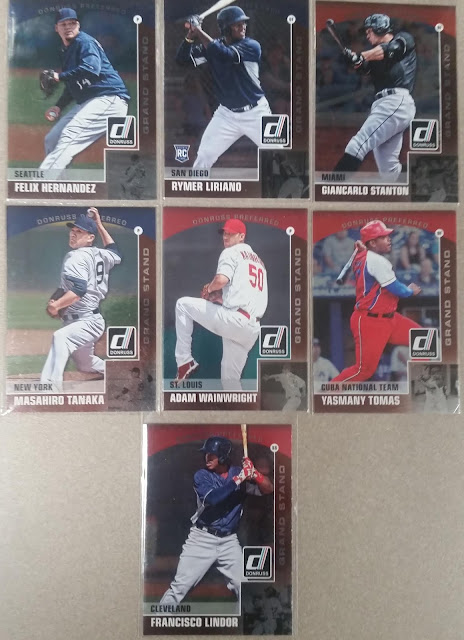 These players also came in the lot, but I they're all trade bait.  If you want any of these, let me know.

So here I am, starting with a misspelled name search of Aaron Rodgers.  One thing led another, I got combined shipping and kept looking for another fit for my collection.  Moving step by step, I ended up at shiny, logoless Donruss inserts of guys like Rymer Liriano and Yasmany Tomas.  Like tracing my thought process, I can see how this eclectic ebay purchase came about. 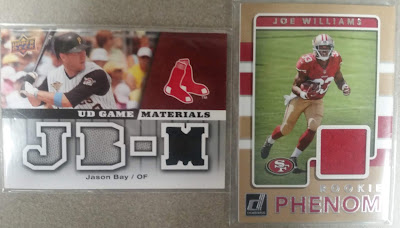 The seller also threw in a couple of bonus relics.  The first is Jason Bay, my first relic of this ROY and a great fit for my collection.  The other is Joe Williams, a former Utah Ute (booooooooo!), but a card that could bring me a trade at a card show, since he is local. Both are nice random bonuses for me.

If you're interested, the seller was eghigh01, and he was very pleasant to work with.  It was a bigger ebay purchase than I usually make, but I felt like I got good cards for a good price.  If any of the trade bait interests you, let me know and we can work on a trade.
Posted by Trevor P at 11:41 AM 3 comments: