Let's Check Out Some Cards

Browsing COMC can be dangerous.  Anytime I go on there, I find more cards that I had never really known before that they existed.  And just like that!  I want them.  Typically, my COMC orders are bigger than I really care to admit to myself.  In recent months, I've been trying to be more disciplined with all of my finances in general, and that has affected my collecting habits greatly.  Evidence of this comes in my most recent COMC order, which really wasn't too plentiful.  I may not have gotten a great quantity of cards this time around, but I'm very happy with the quality. 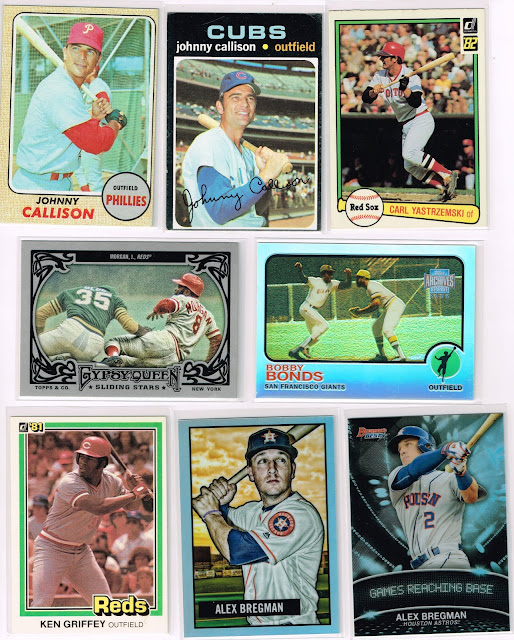 These cards range from 1968 real cardboard feel to shiny modern cards.  Heck, we have a shiny modern refractor of a vintage Bobby Bonds.  It's a beautiful card.  Then we have a faux-vintage Gypsy Queen of legend Joe Morgan and a shiny vintage-style of youngster Alex Bregman.  The one common thread is All-Star Game MVP. 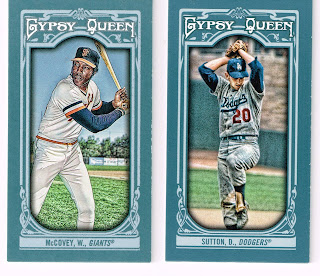 A couple more players who belong in that category, in miniature form.  Lots of legends in this order. 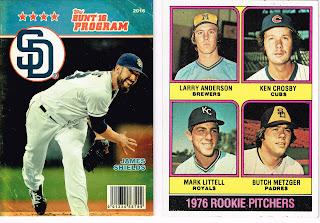 There really isn't a common thread for these two cards.  I needed the Shields for my slow-moving Bunt Programs set-build.  The 1976 Rookie Pitchers card features two players I need for two different reasons.  Ken Crosby could obviously fit in my Cubs binder, while Butch Metzger would go in my ROY binder.  Since this is the first Ken Crosby I own, the nod goes to allowing him representation in my Cubs binder. 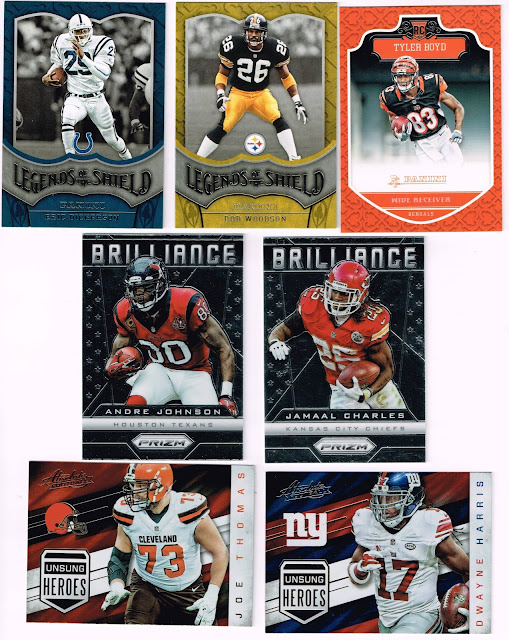 More shiny!  These are some set builds. 2013 Prizm Brilliance is completed.  2016 Panini Legends of the Shield is one shy.  2016 Absolute Unsung Heroes is also extremely close.  I'm only missing rookies for  2016 Panini, but Tyler Boyd is no longer one of them. 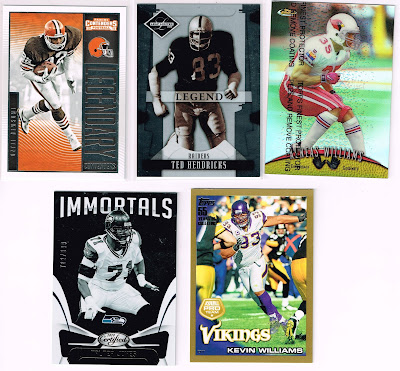 We'll finish this short post with some all-time greats.  Three of these cards are serial-numbered (Hendricks /499, Jones /999, and Kevin Williams /2011).  My favorite, though, is the Finest Refractor of Aeneas Williams.  He may be a Hall of Famer, but I still believe he is underrated.  This card is beautiful in-hand.

Happy Friday, everyone!
Posted by Trevor P at 3:36 PM 3 comments:

The Spirit of Giving

Around Christmastime, we always talk about the Spirit of Giving.  True enough, people generally think more about gifting to others through the months of November and December than at any time.  During that Season of Giving, Jason at Hoarding Cardboard ran a Season of Giving segment on his blog, where he gave away a card to a random winner each day.  I just happened to win on one of those days, but it was a card that I felt fit into another blogger's collection a little better, so I had the card sent to Matt instead.

As is typically the case in the cardsphere, the Spirit of Giving knows no seasonal bounds, because Jason sent me a package about a month later.  He wrote a little note of thanks for my spirit of giving and did some damage to my wantlists. 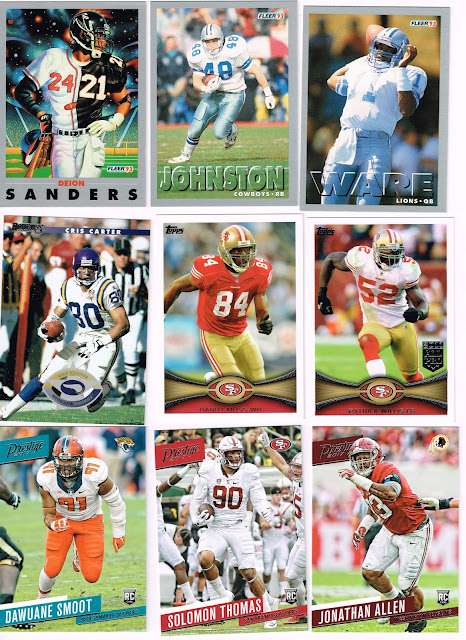 He sent me some set building needs. I'm now down to only five 1993 Fleer needs and single digits for 1996 Donruss. 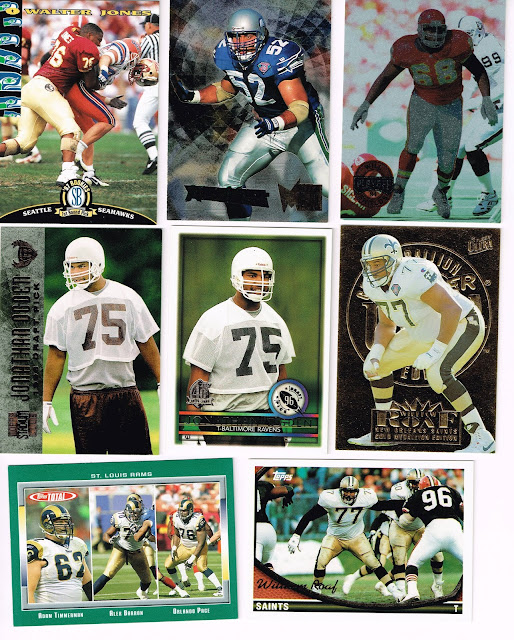 Jason sure know my preferences.  Like, how about some Hall of Fame offensive linemen?  The Walter Jones card on the top left is interesting.  This appears to be some extracurricular action going on here.  I can't think of another scenario where Jones has his helmet flying off as he wraps up a defender who doesn't appear to have come up with a turnover.  The card in the middle of the top row is a rookie card of newest Canton resident, Kevin Mawae. 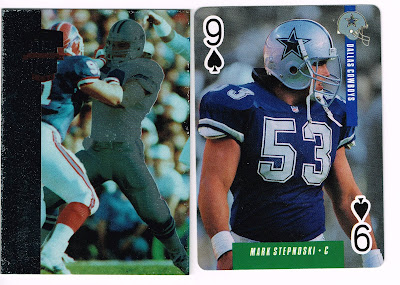 Not a Hall of Famer, but Mark Stepnoski was a solid o-linemen in his time, too.  If you don't believe me just check out what the media (and former NFL players themselves) thought of him.  These two cards are a Summerall's Best Playoff subset and a Ditka's Picks playing card. 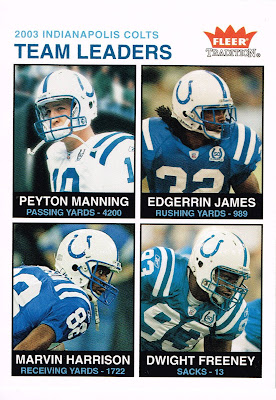 Every player on this card is on the NFL's All-Decade team for the 2000's.  One (Harrison) is a Hall of Famer, two more (Manning and Freeney) are probably already being fitted for the their gold jackets, and the remaining player (James) has been a finalist more than once and will most likely get in someday.  That's quite a team.  The card says 2003 team leaders, but these stats come from the 2002 season.  The 2002 Colts finished 10-6, good for a Wild Card berth.  Manning and Harrison were the only two Pro Bowlers on the team.  Surprisingly, it was the defense that was better that year, as the Colts finished with the #17 scoring offense and the #7 scoring defense. 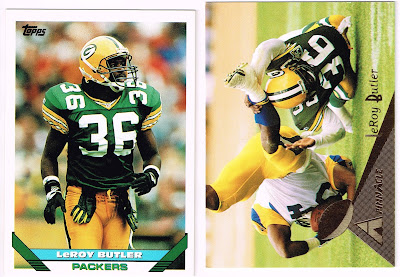 Now we get to the part of the package when I get cards of my favorite teams.  LeRoy Butler represents the Packers here, and that's just fine with me. 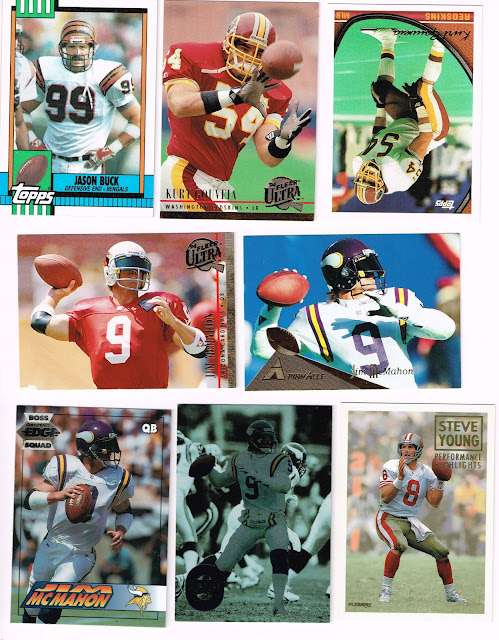 Jason also sent me some BYU greats.  Yes, Kurt Gouveia is scanned upside-down in the top row.  No, I'm not going to back and rescan it.  It is how it is, and that's how it will stay.  It will go into the page right-side up, though.

Jason really didn't have to send anything.  Among card collectors, I think most of us are always ready and willing to give.  Thanks to all of you for your generosity, and Jason in particular for this great package.
Posted by Trevor P at 7:53 AM 2 comments:

Geez, it seems like it took almost all night for these videos to process. I had pretty poor Internet speeds yesterday.  Here are the breaks.


I've been trying not to say anything, since I don't want to spoil the break, but it was a bit of a disappointing break.  No team that was claimed got a big hit or truly exciting card, but I guess that's the way it goes quite often.  The cards themselves were well-designed and shiny, which is a plus in my book, so there is that.  I liked the look of both products.  As I stated in the video, I will ship next week, after we see who wins the big game on Sunday and gets the bonus hit.  Thanks to all who participated!
Posted by Trevor P at 7:47 AM 1 comment: