Wow, it has been an unintentional two-month hiatus. I just finished my first school year in my new position and I learned that the end of the school year gets pretty hectic from this angle. Plus, when teachers are wrapping up lessons and sending students home, I found myself preparing the summer training courses that our faculty participates in. My busy times of year were kind of the opposite of my typical times throughout my career. Then we had a family vacation and I've continued to work since we got back. So here we are, two months after my last post and I've barely even kept up on reading others' blogs.
On the last day of school, I locked myself in my office after our faculty luncheon and celebrated by breaking a couple of boxes of cards. Except I didn't want any new product that was on the store shelves. So I stopped at my local LCS and picked up a couple of random 400-count grab boxes. I went with one football and one baseball.
I know these are crapshoots. In the past, I've found some great cards inside these boxes, while other times I've pulled out hundreds of 1990 Donruss and 1989 Bowman. But at $7 a box, the risk is worth it to me.
So I popped open the storage boxes and braced myself for the telltale brown or red borders of late 80s Topps and the dreaded Donruss year. 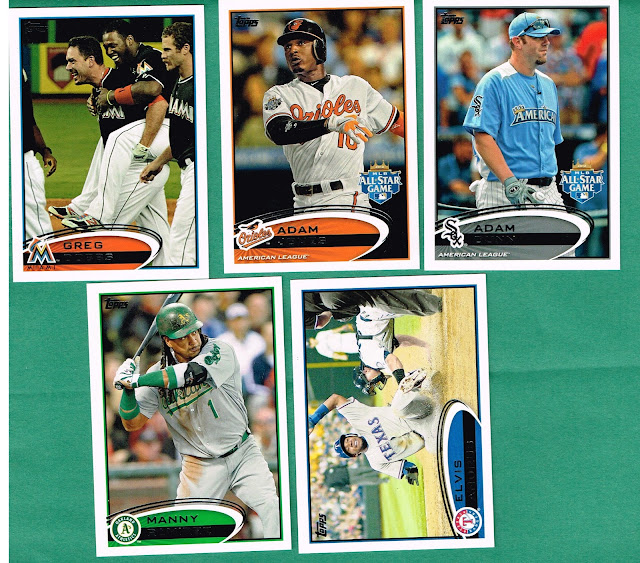 The baseball box, at least, was far from that. The oldest cards in the box were from 2012. Not that newer is necessarily better, but it makes better trade bait and it stands better chances of filling holes in my collection.

I guess I was wrong. These three are from 2010. But they're the only three that pre-date the 2012 Update above. 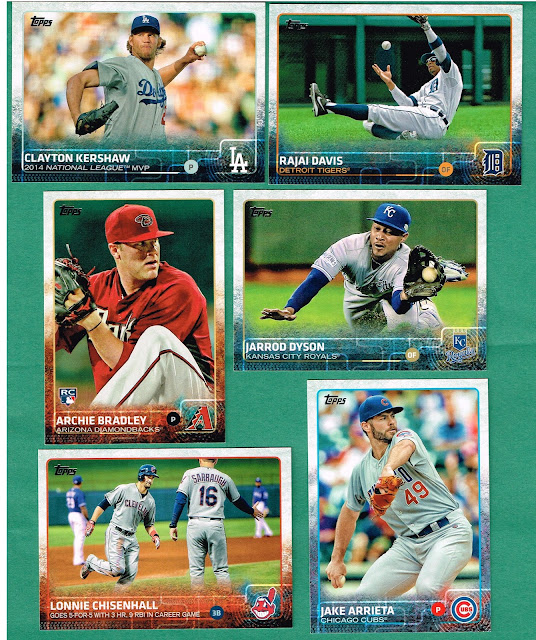 2015 was probably the second-most-common year in the box. I once thought that I would put together this Flagship set, but after completing the Chrome version for the year, I decided that was good enough. I don't love it as much as I did when it first came out, but it's still a great look and unique design for Topps. 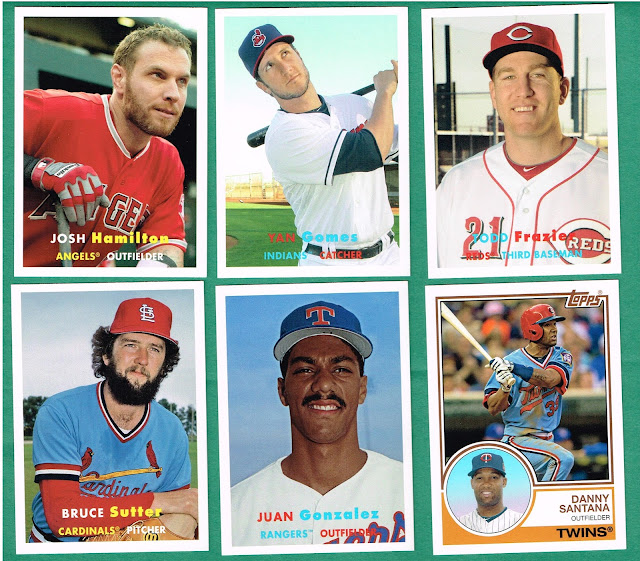 More 2015, these coming from Archives. There was a decent chunk of the 1-100 portion of the set, in the 1957 style. Only a couple of the other designs represented in that year's Archives. 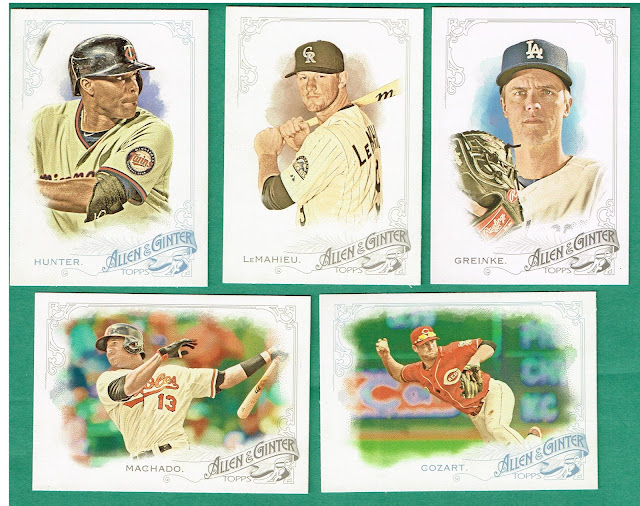 I'm in what feels like the minority of card bloggers in the sense that I don't collect A&G. So it was a treat for me when I came across a stack of about eighty 2015 A&G cards because I knew they would all be new to me. Most ended up in my traders box, including all of these, but a few slotted into my collection. 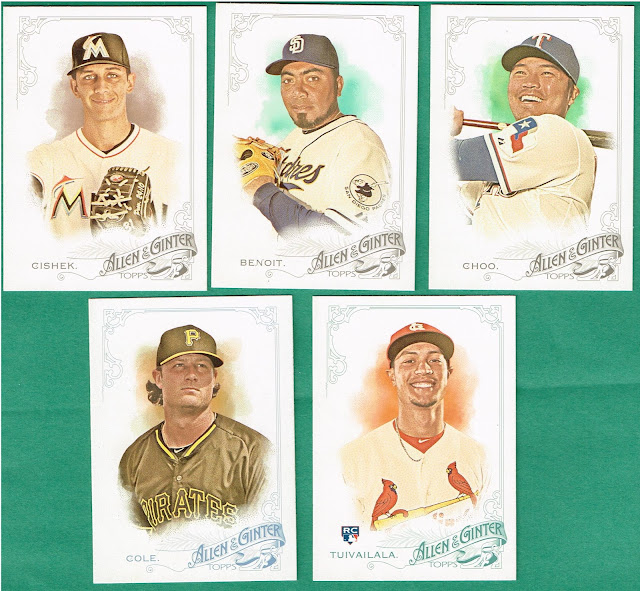 There were even these SPs! All of which are for trade. The only SP that I put in my collection was one of Cubs legend Mike Olt. 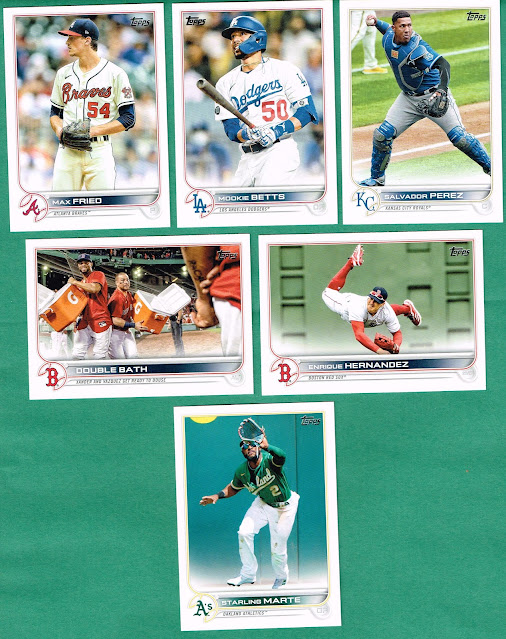 I mentioned that 2015 was the second-most-common year of the box. The most common? Well, 2022. I haven't bought any 2022 Flagship and passed over it in favor of this box. Then I got over half of Series 1 anyway for less than half the price! I think I scored on this deal.

There were even a few inserts from this year. It's the 35th anniversary of 1987 Wood Grain, so Topps dusted off the rarely used concept for a commemorative insert set.

Now for the football box. As was the case with the baseball box, there are hits and misses with this LCS's football grab boxes. I once got a box that was 80% 1989 Pro Set and 20% 1988 Topps, both of which I already had all I needed. But there have been boxes that contained some great newer cards and 90s inserts, which are always fun. So what did this box have in store? 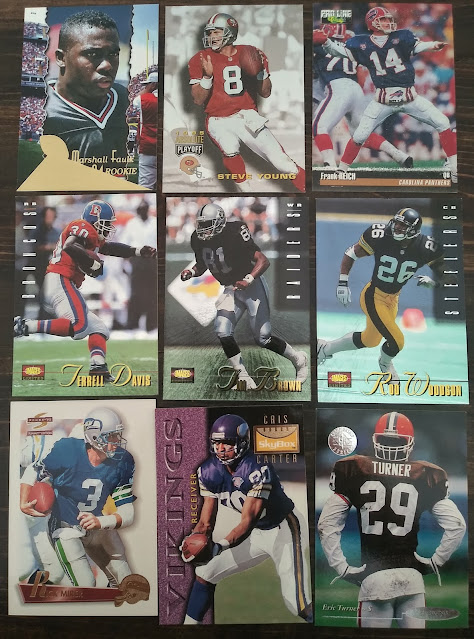 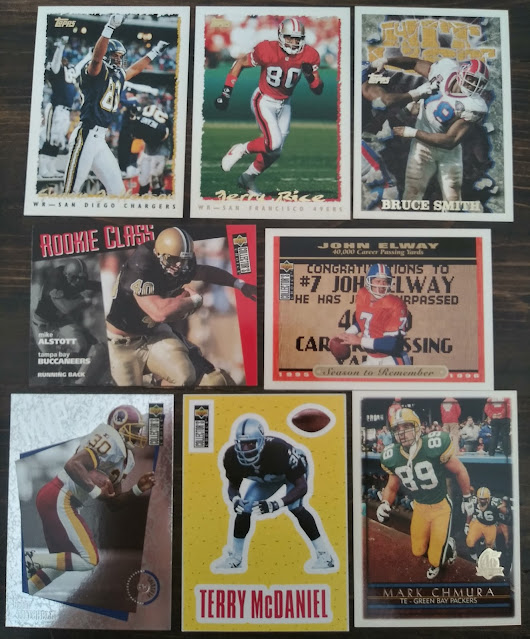 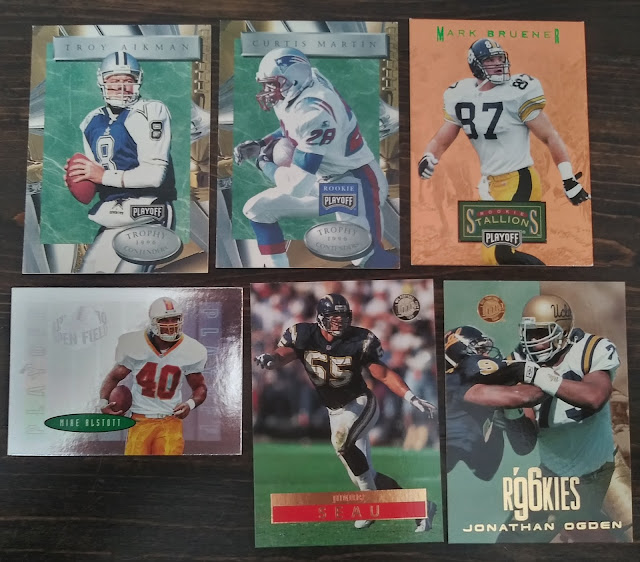 It was all 90s, all the time! Every card in that 400-count box--except for three--came from the 1990s. There were some gems, too. Score Summit, the chromified Classic Images Limited, and shiny inserts. And how about that Marshall Faulk rookie and that horrifying Eric Turner where his head has been completely twisted around? I particularly love the John Elway with the scoreboard perfectly framed in the background and Mark Chmura coming out of the . . . dugout? Must have been one of the old Milwaukee games for the Packers. 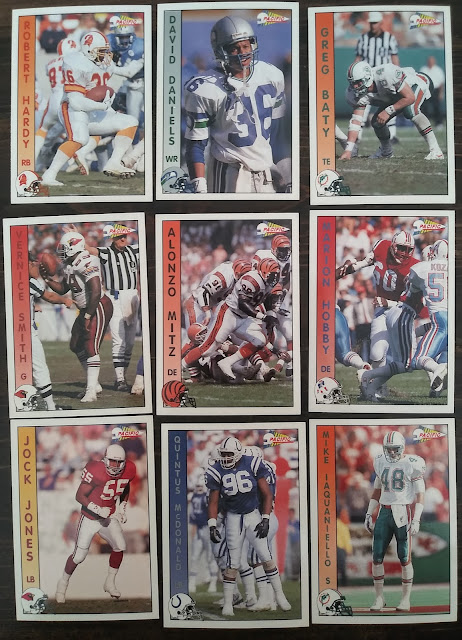 Half of the box was 1992 Pacific. It's not my favorite set and not one that I plan to run out and pick up, but it does offer one point of fun: these are all players I have never heard of. It's rare for players from the early to mid-90s to have cardboard representation and remain anonymous to me. I lived and breathed football at that age. I collected cards, read all the preseason guides, and even had almanacs for each season that I pored over when I was 10-13 years old. I played Tecmo Super Bowl constantly! I knew the rosters. But with each of the players above, pulling their card out of this box in May 2022 was my introduction to them. And with names like Baty, Vernice, Mitz, Hobby, Jock, Quintus, and Iaquaniello, I think I would have remembered them. All even had stats on the back to prove they had seen regular season action, too. You know, they actually had four receptions or 57 rushing yards in 1991 and I had no idea. 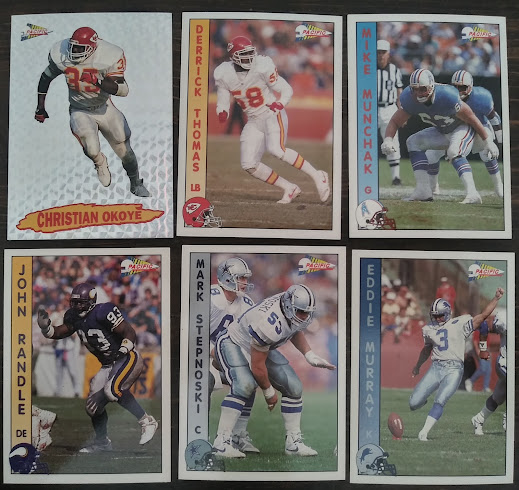 There were bigger names in the set and in the box, too. These all fit into my All-Decade collections. Except for Christian Okoye. But I was stoked to find it because I had never seen any of these early Prisms outside of the ads in Beckett when I was a kid. I always thought they were cool, but I never pulled any of them and never pursued them later on. 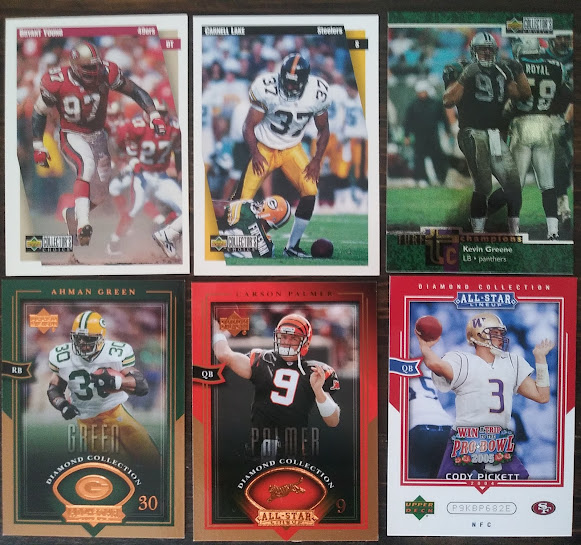 The three non-90s cards were from 2004 and a set I'd never heard of before: Upper Deck Diamond Collection All-Star Lineup. I like them a lot and it was fortunate that my find consisted of a Packer and a Heisman winner for my collection. 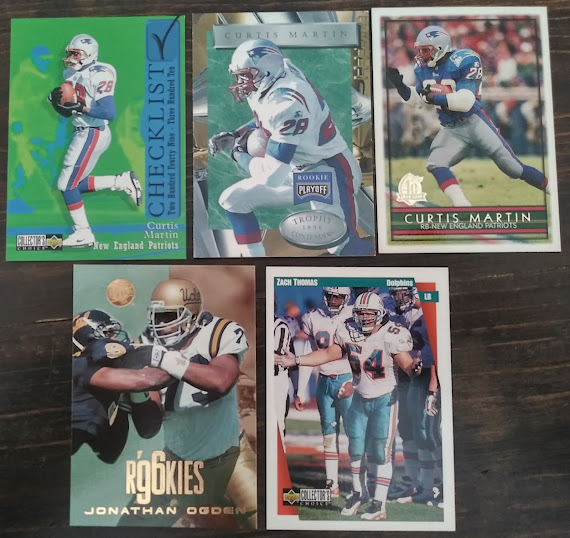 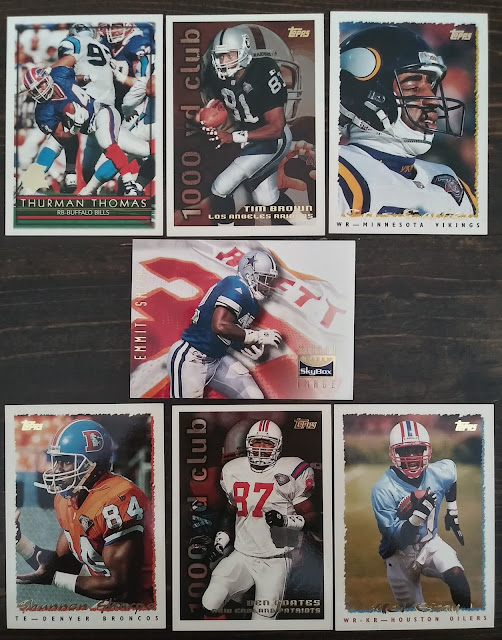 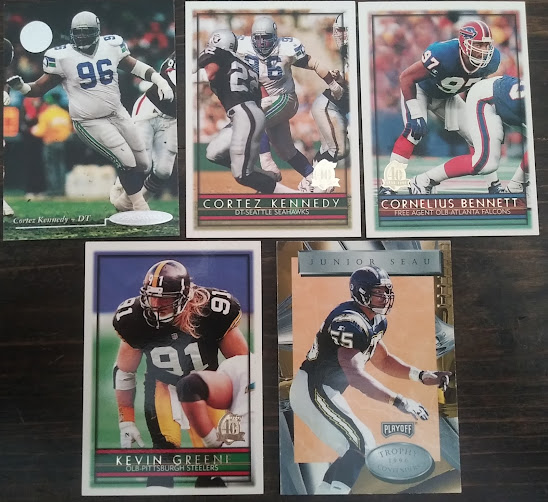 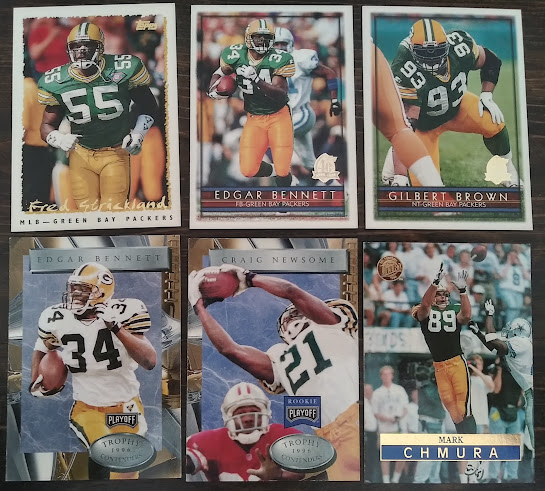 These last pictures show the variety of the sets in the box and the definite keepers for me.

I had a ton of fun going through these two grab boxes. I had no idea if it would be worth my $15, but in this case, both boxes came through and beat any packs I could have pulled off the shelf at Walmart, in my opinion.

If you're wondering what I've been doing hobby-wise while I haven't been blogging, this about sums it up. The time I've spent with my cards has mostly been sorting, cataloging, and storing the haul from my last-day-of-school boxes. I haven't had a lot of time, but I haven't gotten anything new, either. I'll try to stay on the blogging horse, though, and at least get a couple of posts published each month.