After a flurry of trade activity when I first joined the Trading Card Database, the trading has slowed considerably.  This has been partly because all those voracious traders have gotten what they need from my tradelist, and partly because I'm taking a semi-break from new card acquisitions.  I'm trying to get organized and I can't keep up with a ton of incoming cards and my reorganization.  So here is my one trade for the month of June, my second trade with jmiller4. 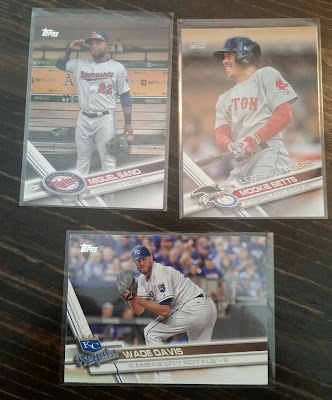 The highlight of the trade for me was the near-completion of Series 1.  I'm now only 3 cards away from Series 1.  Here are the more notable cards from this trade.  I love the Sano dugout shot. 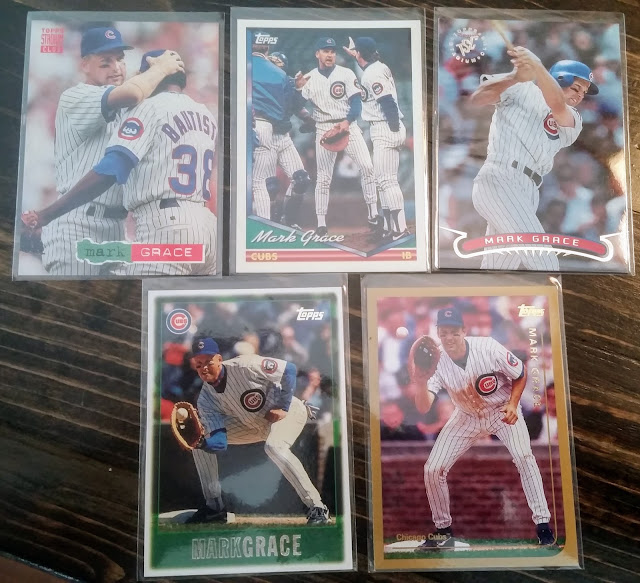 Five new Gracies for my collection.  I'm surprised a couple of these weren't in my collection already, since they look so familiar, but they are new to me. 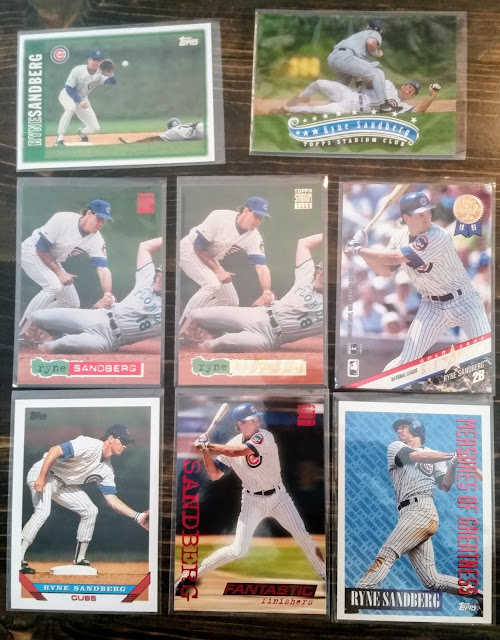 We can't forget his infield mate, the great Ryno.  The middle card is Rainbow parallel from TSC and the next one is an insert with Carlos Baerga on the back. 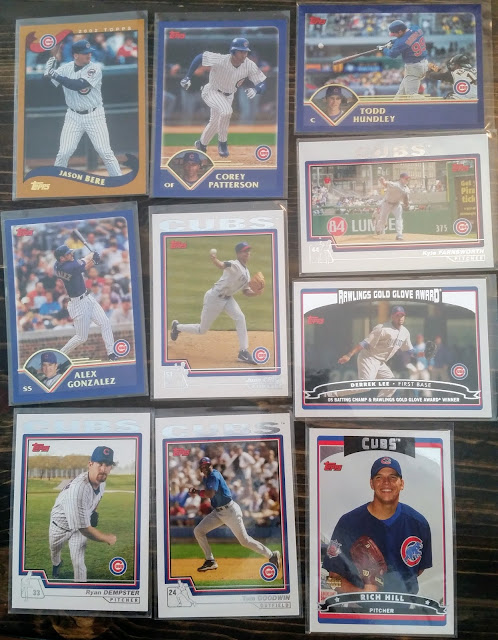 I also got some random 2000s Cubs that I needed.  Some of these players are the first I have in my collection.  I'm digging the Rich Hill rookie, even if he isn't duplicating last year's success this year. 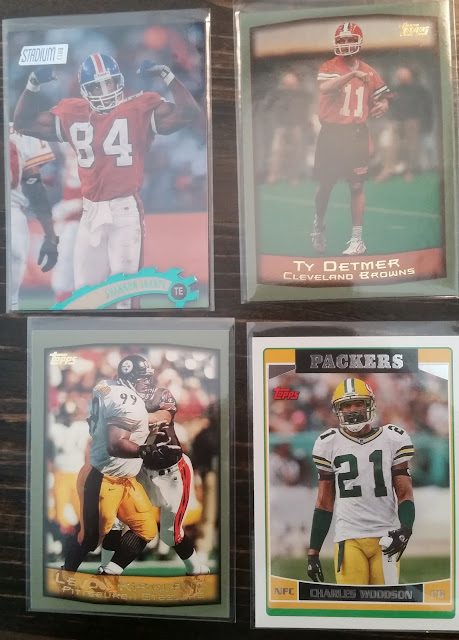 Finally, I can't have a trade package without some football involved.  Here we have some All-Decade guys with a former BYU great (and current BYU coach).

I appreciate the trade package from jmiller4.  It had about everything for me: set help, Cubs, All-Decade NFLers, BYU, and Green Bay.  I like the variety.
Posted by Trevor P at 11:45 AM No comments:

A New Trading Partner, Thanks to Johnny's BFG

A few weeks ago, I was the recipient of a Highland Mint Robin Yount in Johnny's Trading Spot's Big Fun Game.  Not too long after the contest ended, blogger and Brewers fan Matt Prigge contacted me about swapping our prizes: his Highland Mint Brooks Robinson for my Yount.  Since I collect Robinson and not Yount, it seemed like a win-win to me.  I got the Robinson this past week, along with some other goodies.  It's been kind of a long time coming, but I'm finally posting my BFG contest winnings.

First, the extras that John sent with the Yount. 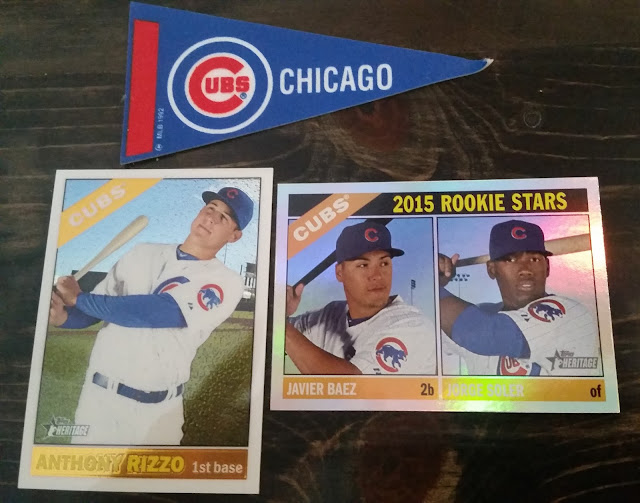 Some beautiful Topps Heritage Chrome Cubbies.  I had the base for both of these cards, but the Chrome versions are spectacular.  The Rizzo is numbered to 999.

I also received the Yount, which was parlayed into these cards from Matt:

Some new Pucketts for my PC.  I've seen the 93 Topps with the gigantic bat before, but I had never owned it until now.

A couple of Angels in the outfield.  At first, I couldn't figure out if the 1993 Topps was Salmon's rookie card or not, and why it didn't look familiar.  I soon discovered that it is actually a 2013 Archives short print, so that's pretty cool.  I really like the look of those two Trout inserts, too. 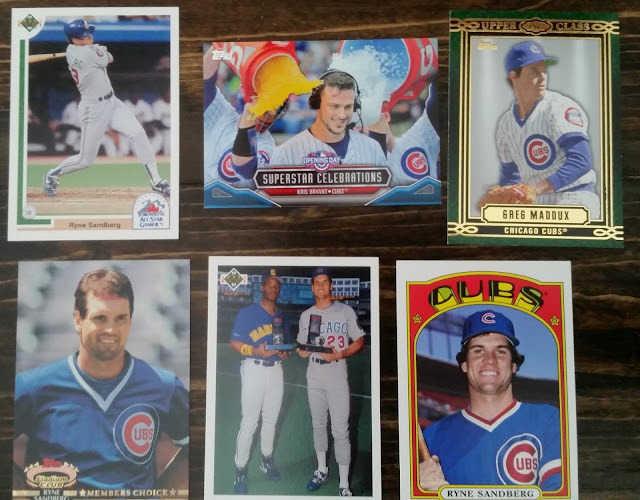 Some great Cubs also arrived in Matt's package.  I thought I had that Bryant already, but I was mistaken.  I appreciate Matt filling in that hole for me.

And finally, the crown jewel of this post, my Big Fun Prize from John, via Matt: 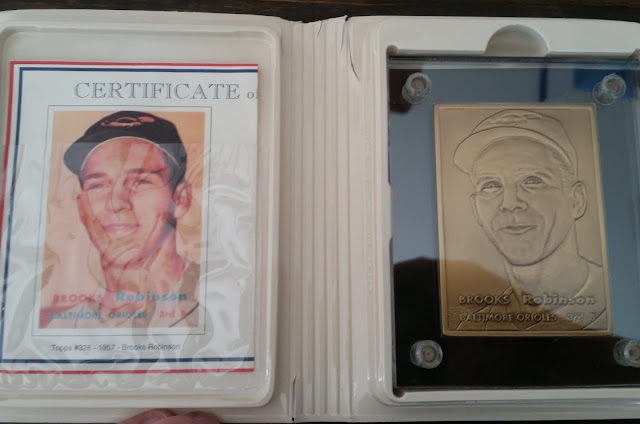 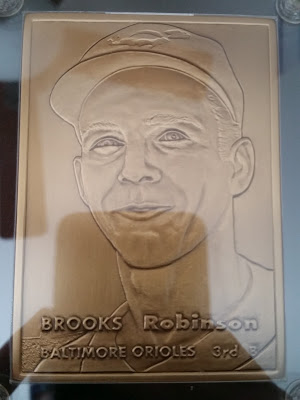 Here it is in all its glory.  The picture really doesn't do it justice.  I love the detail in it.

Thanks for the contest, John, and thanks for a solid win-win trade, Matt!
Posted by Trevor P at 4:16 PM 2 comments:

Cards from Oregon: Some Base Trade Bait?

I've been out of the blogosphere for a few weeks now, partly because I took the family to Oregon for 10 days to visit my wife's sister.  I may not have posted anything, but I did pick up some cards while I was there.  I always like to check out the stores and products in other areas I visit, because it seems I usually find something that is hard to come by in my neck of the woods.  I didn't find anything too unusual this time around, but I certainly couldn't leave Oregon without a souvenir.  So today, I proudly present to you: Cards from Oregon.

I picked up a repack blaster for $11 and was pleasantly surprised at its contents.  It was filled with older stuff--most of it from my time away from collecting--that I had never opened for the most part.  It also included this sweet bonus card: 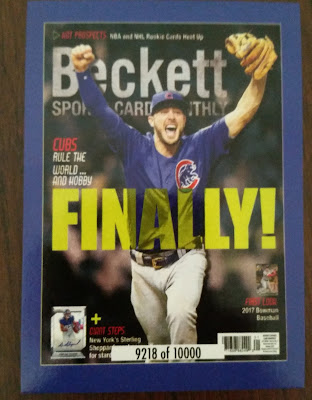 Schwarber is on the other side.  Not a bad pull, I have to say.

Let's take a gander at the cards in the box. 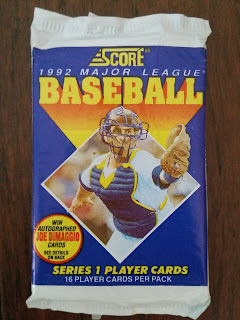 1992 Score was the only product included in this repack that I have actually opened for myself. 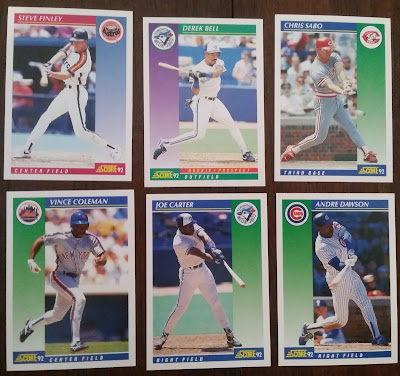 I've always thought that Score did a better job with baseball than its football.  Here are some of the bigger names, including Sabo, Coleman, Carter, and Dawson for my collection. 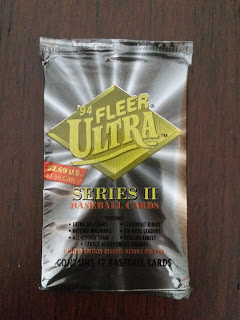 Continuing in chronological order, there was a pack of 1994 Ultra. 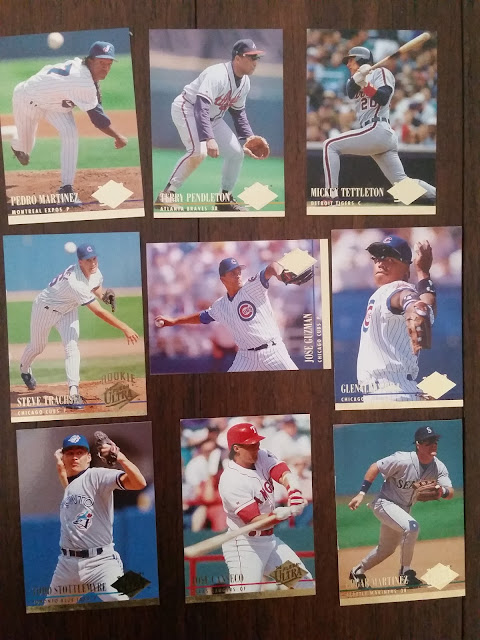 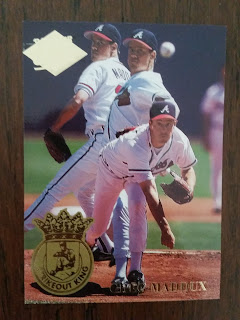 Plenty of Cubs, including that Steve Trachsel rookie, and a nice Greg Maddux insert. 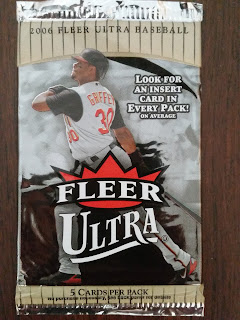 Sticking with Ultra, we'll jump to 2006.  There were two packs of this in the box. 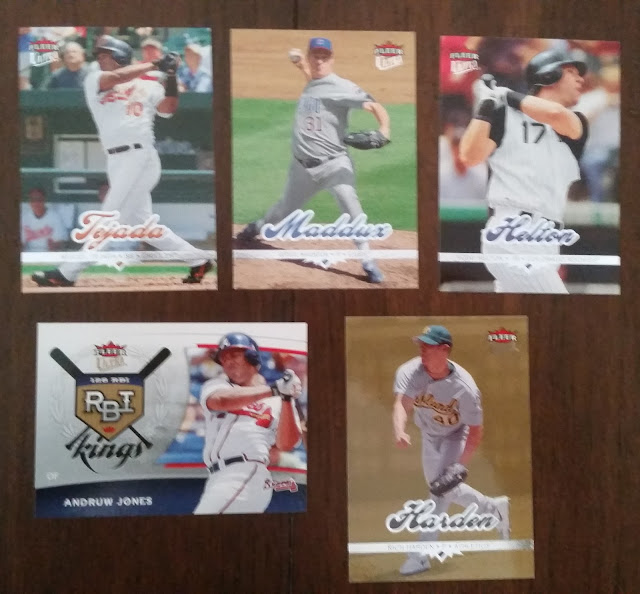 This was probably my favorite pack of the box.  Every card here fits in my collection.  I really like the base design, though all the Ultra products of this era kind of looked the same.  The insert is kind of "meh."  I'm going to guess that there was a relic version of this set and that's why there is so much wasted space. 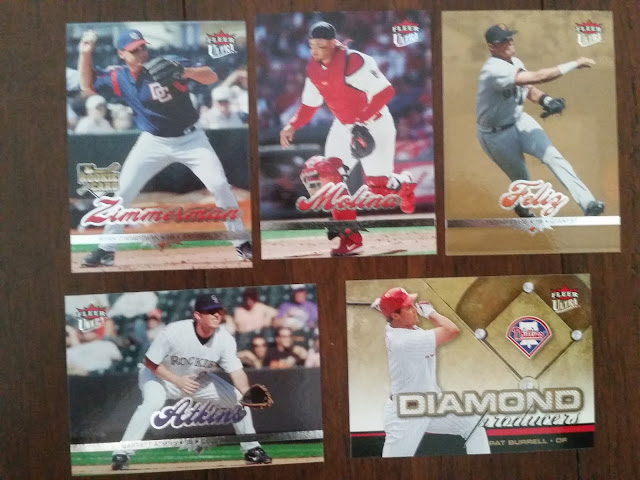 The second pack wasn't too shabby.  It's good time to pull a Ryan Zimmerman rookie with the season he is having.  I had completely forgotten about Garrett Atkins.  He was a big deal for a while. . . and then suddenly he wasn't.  I love when my cards do that to me. 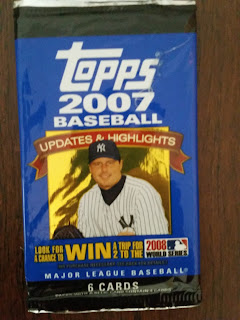 Next up is 2007 Topps Update.  I have to say that 2007 is probably my least favorite Topps set of the 2000s.  This is the first time I've ever opened a pack of it fresh, though.  Maybe ripping some Update for myself will help me feel better about it. 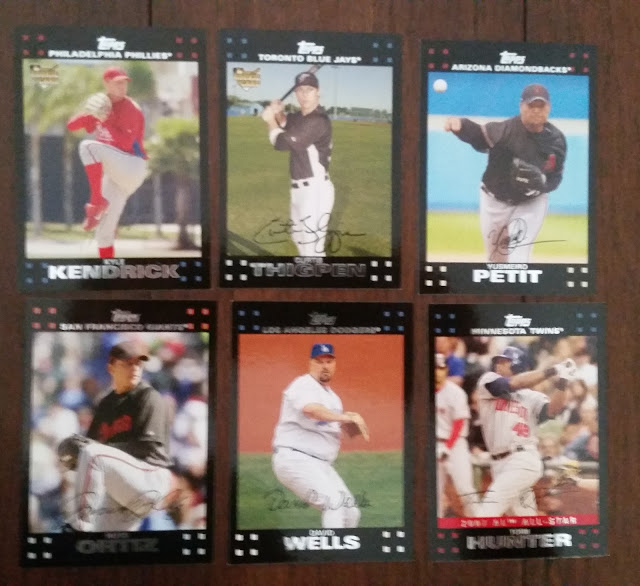 No, not really.  I like the Hunter.  I never realized David Wells played for the Dodgers.  This is really what I expected: weird, thick, movie reel border. 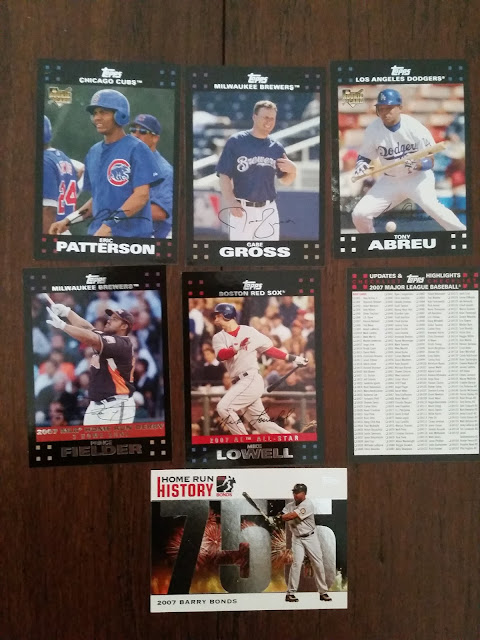 I appreciate what Topps did here, though.  Checklists aren't necessarily bad, but it is nice that it was a bonus 7th card, not one of the six.  By the way, I found on TCDB that there are blue and red checklists.  Does anyone know anything about this red one?  As for the Barry Bonds insert, I don't like him at all, and I hate that he owns the home run record, but if you're going to pull a Bonds Home Run History insert, it may as well be #755, though, right? 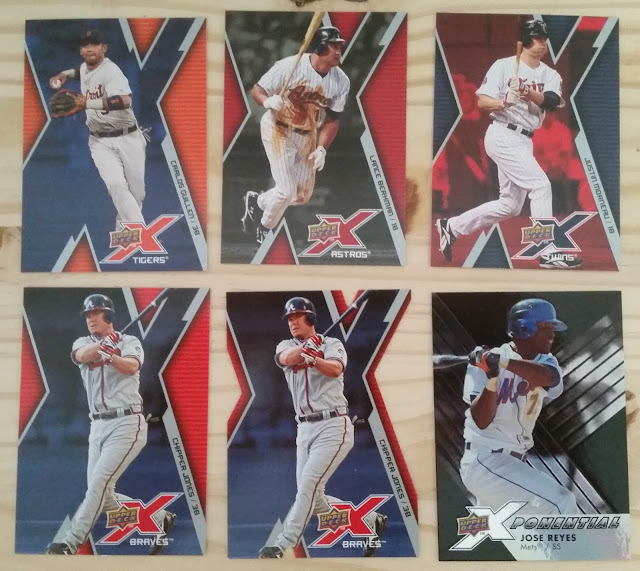 Apparently, I forgot to take a picture of the wrapper for 2009 Upper Deck X.  UDX was a strange set, I thought.  The wrappers were as shiny and attractive as can be, and the cards were kind of blah.  I completed the 2008 set last year, but had never seen the 2009 version.  This one was a Chipper Jones hot pack!  The base and the die-cut in one place.  The Xponential 4 was a nice pull, as the 4 was the toughest Xponential pull.  Overall, I like 2009 more than 2008.  There is way more color, but the card is still pretty busy and cheap looking. 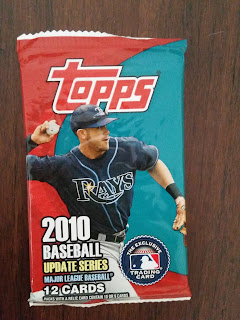 I thought these were some fun cards.  Andrew Bailey fits into my ROY collection.  His page still needs some work.

Each pack contains an Attax Code card and I pulled the extra Spahn insert, too.  I can't argue with an insert Cubbie, and I like that Tales of the Game set.  At least the idea of it.  If I recall, it was pretty much dominated by Yankees.

Well, that will do it for my Oregon souvenir blaster.  I'm listing all the cards from this box that are available for trade, if anybody is in need of anything on the list, just let me know.

As I'm sure most of you know by now, Julie at A Cracked Bat is holding a contest to celebrate 100 posts.  Check it out here and good luck.
Posted by Trevor P at 3:43 PM 1 comment: