Rookie of the Year on Baseball Card Day

This is a somewhat timely post. Sure, National Baseball Card Day (or, "International Trading Card Day") was all the way back in August. I picked up my free pack of cards way back then and never posted anything about it. But it's still timely today because one of my pulls was a guy who was recently honored with an MLB "Major Award."

That major award was American League Rookie of the Year. The player is Julio Rodriguez. 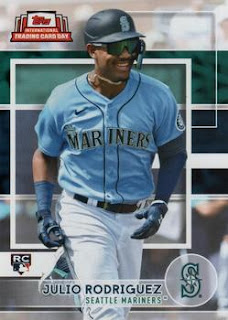 This is my only J-Rod so far. I'm using it in this post to welcome him and NL ROY Michael Harris to my Rookie of the Year collection. I don't have any cardboard of Harris, yet. I'll be interested to see how their careers go from here. Documenting the career trajectory of these players is my reason for this little collection. For example, what will become of Cody Bellinger and Aaron Judge, who both won the Rookie of the Year award in 2017, subsequently took home MVP awards, and are now currently free agents? Their careers seem to be going in opposite directions of late. I'm rooting for them, as I am for Rodriguez and Harris.

As for International Card Day, here was an interesting incident. I picked up the thin, clear cellophane pack and saw the Topps promo card had a weird scalloped edge on it. I thought it was kind of odd, but didn't think too hard about it. Then I opened up the pack and saw this. 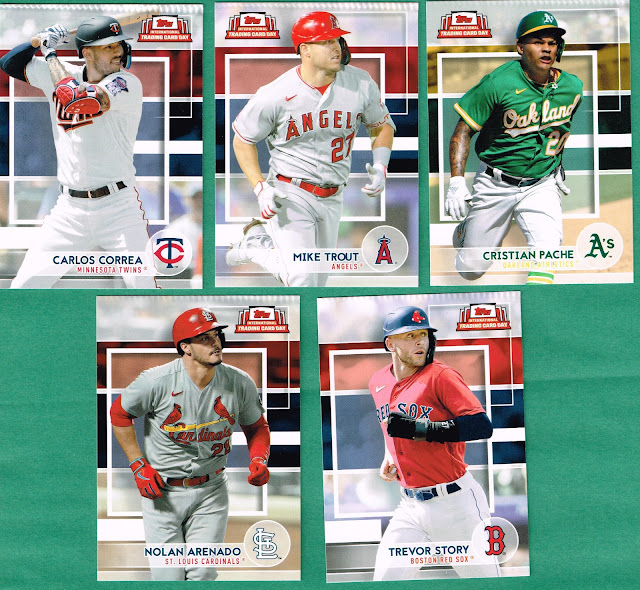 Notice the top of each card. It appears that the machine that crimped and sealed the packages caught the entire stack of cards in this pack. (Which also includes former ROYs Carlos Correa and Mike Trout).

The owner of the LCS also saw this and provided me with another pack, which contained the Julio Rodriguez card. I didn't scan the rest of it, though. The highlight of that pack was my first card of Corey Seager as a Ranger, adding that piece to my collection as I continue to document the career path of yet another former Rookie of the Year.

I may be a few months late in celebrating our little hobby's holiday but as the major holidays approach, I'm right on time recognizing the latest player to be added to my PC. Now I just need to get on track with my Rookie of the Year spotlight posts.

Email ThisBlogThis!Share to TwitterShare to FacebookShare to Pinterest
Labels: ROY

I went on a dry spell without making any purchases for about 3 months. I was saving up some change to a certain amount, then I started buying a bunch of stuff that I needed. In the past few weeks, I've tried to fill set needs. I've tried to hit project and mini-collection needs. I've pursued some new BYU players that I needed to add. Part of what I "needed" was the fun of busting some packs. I found a good deal on a couple of boxes to scratch my itch. 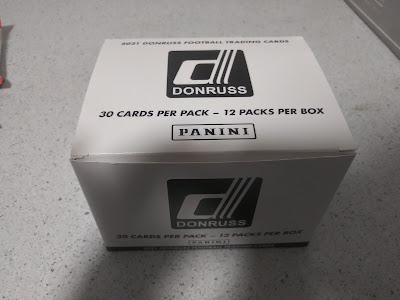 One of those two boxes is 2021 Topps Big League. I haven't touched that one yet. But a fat pack box of last year's Donruss football has already been finished off. I chose this one because I was thinking I needed to complete a 2021 set still. However, after I bought the box, I remembered I already had a complete 2021 Prestige set in my possession. Oh well, I still wanted to bust a box and we'll see if I get close enough to this set to go after it.
Let me me walk you through a typical pack. 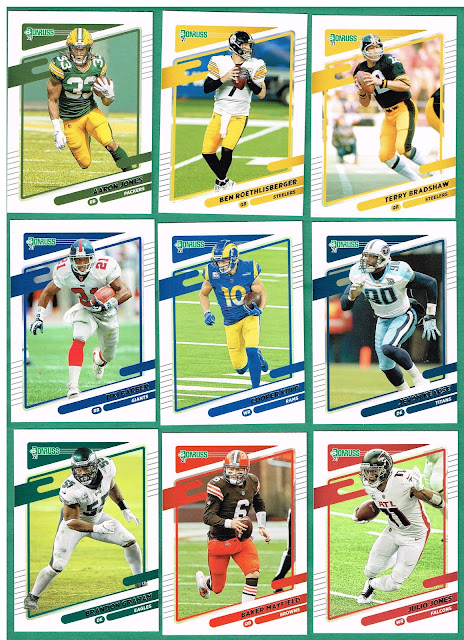 Each pack contained 18 veteran base cards. You can see from this pack, there are a handful of legends in the checklist. 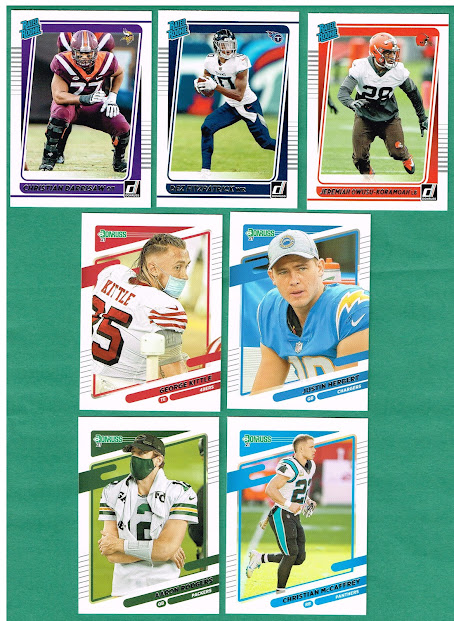 There are three rookies in each pack. This particular pack didn't include any spectacular names. There are 50 photo variations in the set. Each variation is just a helmetless shot. 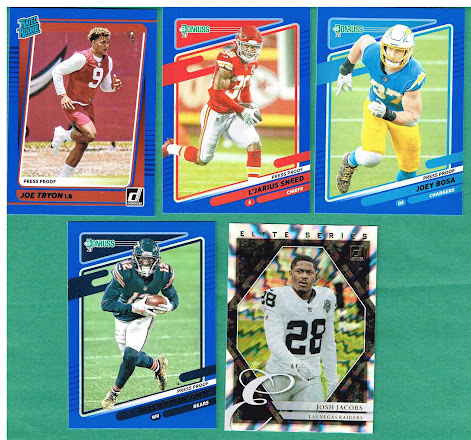 Finally, each pack brought four Press Proof Blue parallels and one insert. This was fairly consistent throughout the box. (Four packs had 3 variations replaced with base cards.) Collation was good; I pulled no dupes. Which, if you do the math, you can already figure out what I ended up with: 220/250 veteran base, 36/100 rookies, 44/50 variations, 48 Press Proof, and 12 inserts.

Moving on from a pack breakdown, we'll see an overview of the entire box. 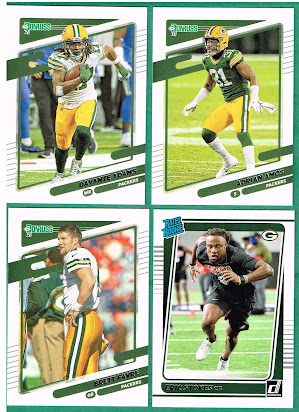 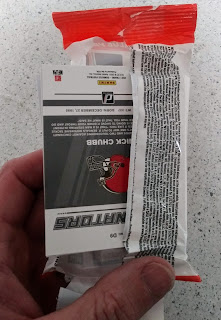 This was an interesting pack. I ripped it and saw a Nick Chubb Dominators as the insert. 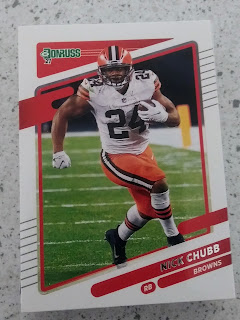 Then pulled the cards out of the pack, flipped them to the front, and found Nick Chubb's base card on the top. 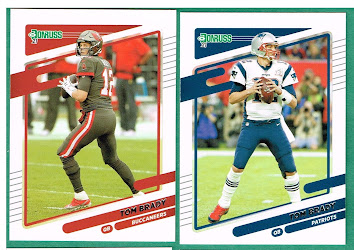 Oddly, there are two Tom Brady base cards. These are not variations of each other. Buccaneer Brady is #1 in the set. Patriot Brady is #2 in the set. It's like the Patriots used Tom Brady as their legend on the checklist, despite the fact that he had a current card with his active team! 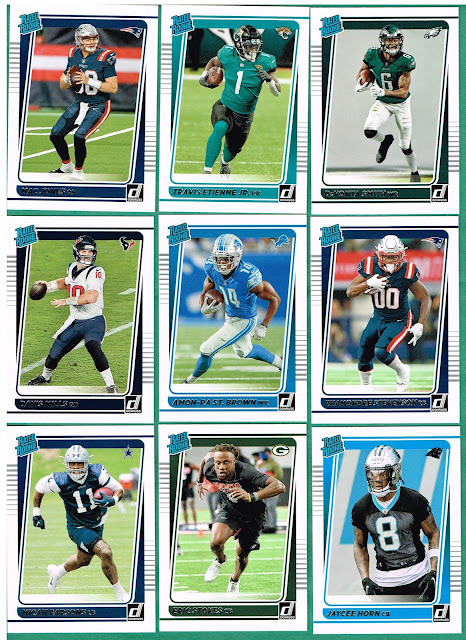 I didn't pull any of the bigger rookies, like Justin Fields or Trevor Lawrence. Or Zach Wilson, which I would have liked best. But here are the best of the rookies in the box. Micah Parsons is already on the threshold of superstardom. Amon-Ra St. Brown has been a beast this year. Davis Mills has been surprisingly reliable for the Texans. Rhamondre Stevenson, Travis Etienne, and DeVonta Smith are pretty solid. 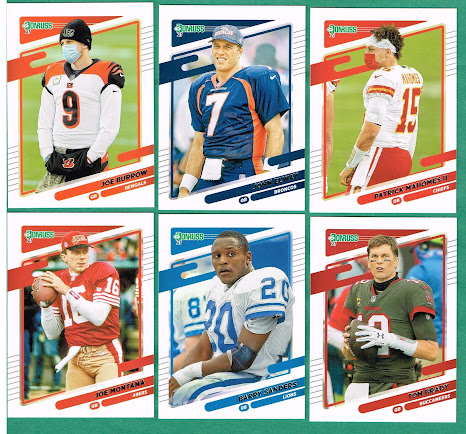 There are far too many masks in the variations. I don't like the reminder, but I guess it will make an interesting historical note in later years for this set. This box got me so close to completion that I decided I'll make a run for the complete base set: vets, rookies, and variations all. 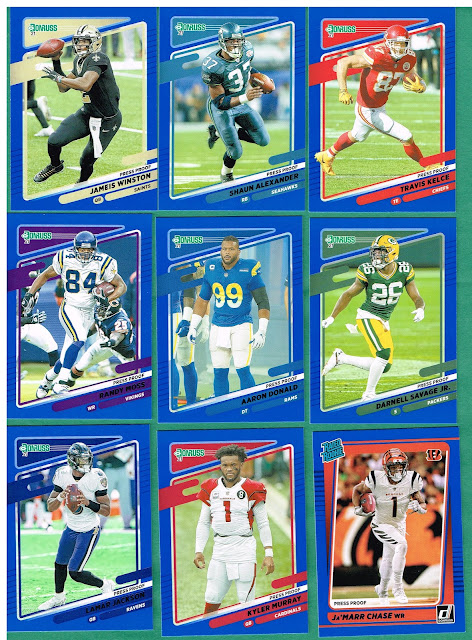 Of all the Blue parallels, these are the ones I am going to keep. 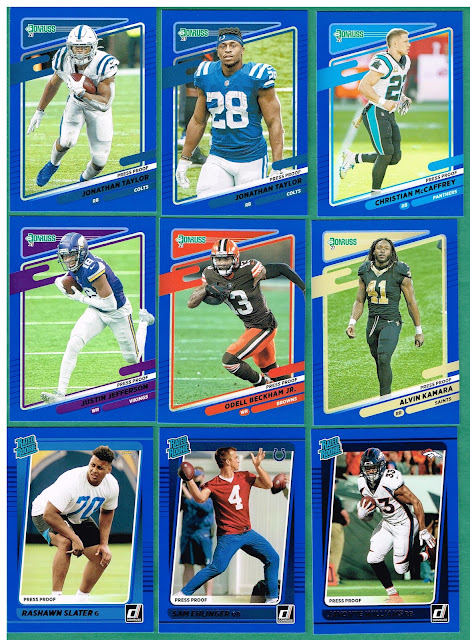 Any other Press Proofs are up for trade. These are the most notable. I pulled both versions of Jonathan Taylor. There are a few interesting rookies here. Rashawn Slater was named #78 in the NFL Top 100 by his peers after just his rookie season. Sam Ehlinger was briefly the starter in Indy this year. And Javonte Williams was playing pretty well before he went down for the season. 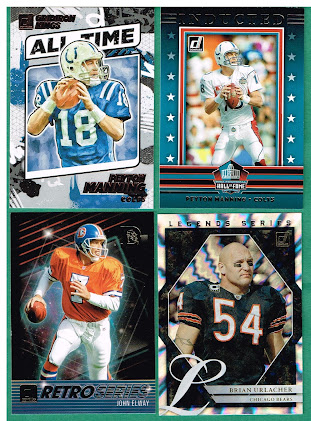 Of the 12 inserts in the box, there were four that will slide into my collection. Elite Series may be shiniest, but only one of the designs is really appealing to me: the simpler Inducted set. 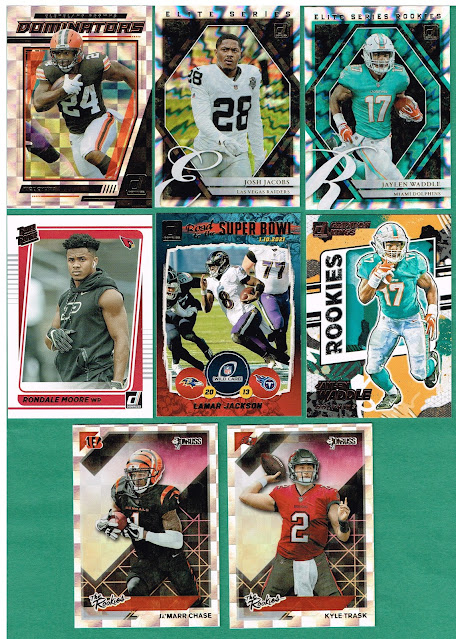 I don't necessarily plan to keep all of these inserts. There are some pretty decent cards here, though. Jaylen Waddle and Ja'Marr Chase are young studs at receiver, and there are three between the two of them here. Nick Chubb and Lamar Jackson are two of the best at their positions. The Rondale Moore card is interesting. In the scan, it looks like just a base card, except for the "Rated Rookie" in gold foil stamping. But it's a "Rookie Portrait" insert and the card has a canvas feel to it.

Even though it's not the coolest product out there, I had a blast opening packs for the first time since my annual Opening Day break back in March. As a bonus, there were no collation issues, so I was able to come within 30 base, 64 rookies, and six SPs of a complete set. So I'm going for it. If you have any 2021 Donruss, here is my wantlist. Let's deal!