I've been using my summer break to do some organizing around the house.  I built some shelving in my garage and finally threw out some useless junk.  I used my newfound space in the garage to move some things out of my shed (which is ridiculously small) and I can move around both spaces for the first time since we moved in almost three years ago.  The organization has extended to my card closet, of course.  As part of this organizing movement, I cleared out some space in my trader box.  In my trader box, I set aside cards that come my way that I think other bloggers might like.  This month, I sent out a few stacks of cards unannounced to a few different bloggers.

One of them, Dennis at Too Many Marios Verlanders, was quick to send back few things my way. 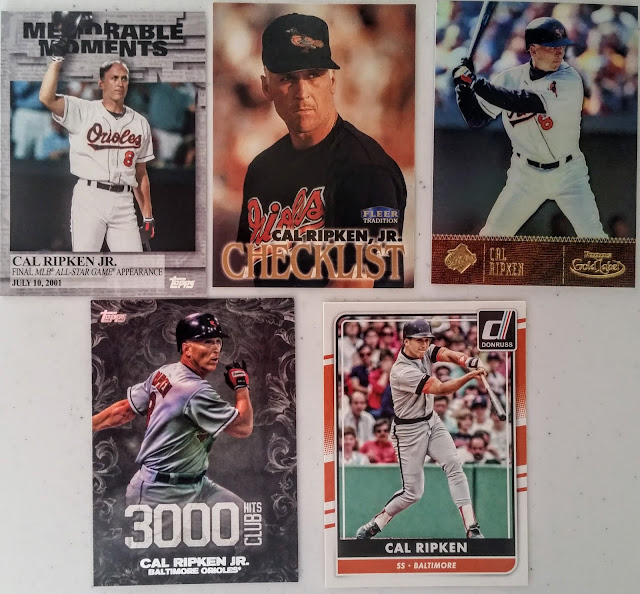 Dennis is a Cal Jr. collector, so it makes sense that he had some extras to send my way.  Surprisingly, all of these cards were needs.  I thought for sure I had the Fleer Tradition checklist and the Donruss in my Cal collection, but it turns out that I didn't. 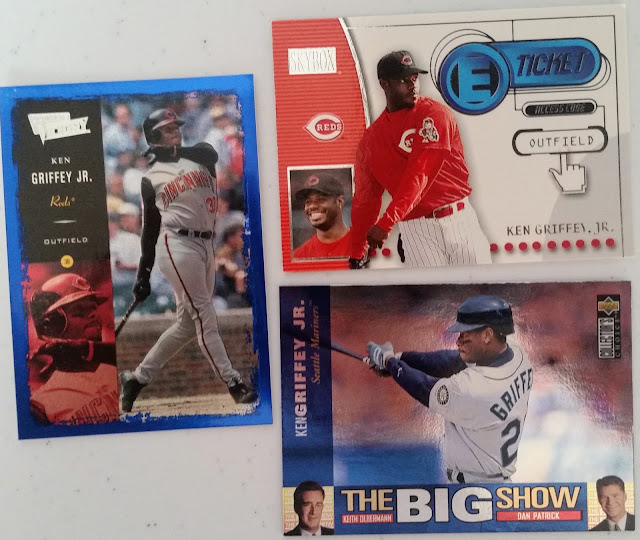 Joining Ripken, Jr. in my ASG MVP binder is Griffey, Jr.  Dennis is still batting 1.000, as I needed all three of these, too. 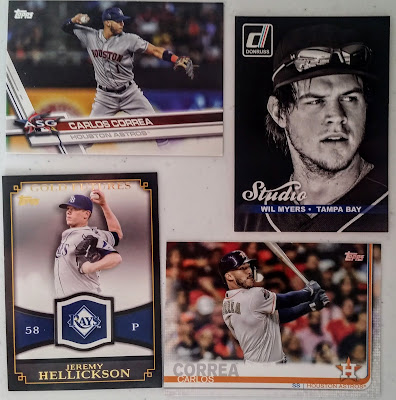 He also hit my ROY binder.  I had the two Correas already, but Myers and Hellickson were new to me.

The biggest item in the package, though, was a Starting Lineup figure of former All-Star MVP Jeff Conine.  I don't collect SLU, but I do collect the cards that accompany them. 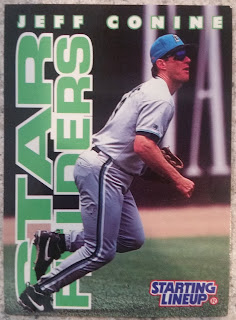 That's not to say the I couldn't put the figure to good use, though.  I still have a few of them from my childhood days, and they sit on display in my classroom.

Conine was able to join his Kenner brethren Barry Sanders, Rod Carew, Harmon Killebrew, and Whitey Ford in a middle school classroom.  The guy you see on the far right is a new item, too.  It came from a stadium giveaway a couple of weeks ago for the local rookie ball team, the Orem Owlz.

Interestingly, I sent a package to Ann Arbor full of Michigan Wolverines, and ended up getting something in return that I could put in my classroom.  Our school's mascot?  Why, it's the Wolverines, of course.  From one Wolverine to another, thank you for the package, Dennis.
Posted by Trevor P at 5:03 PM 2 comments:

During our city's annual celebration week, I took my kids over to the park and we caught a reptile show.  Afterward, I wandered around and looked at the vendors.  Lo and behold, I caught sight of a vendor who I've known from the local card shows.  I picked through his dime box and found about ten cards, but I was more interested in a bunch of sets on shelving unit.  Some of them were marked buy one get one, some were just discounted.  I ended up getting one of those sets.  I didn't know much about what I was seeing, besides that I needed to have it. 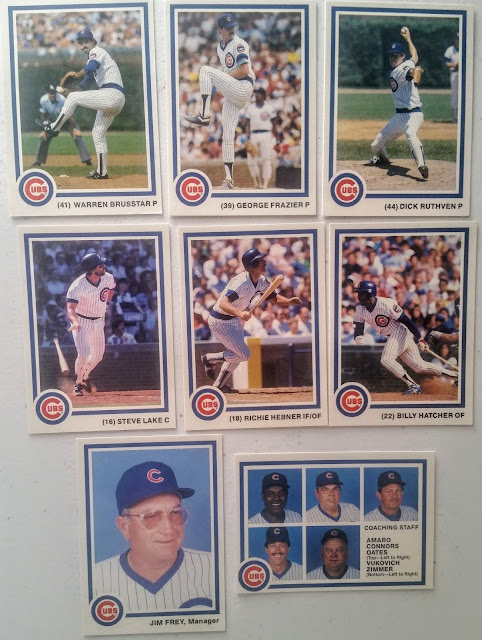 It was a 1985 7-Up Chicago Cubs set.   There are 28 cards in the set, so I'm thinking the entire 25-man roster, manager Jim Frey, and a coach card.  I'm not sure who the 26th player was; I'm thinking there were a couple of players floating back and forth from the minors and were both included in the set.  I love the completeness of this checklist, though.  Guys that were by no means superstars, or even starters, got cards here. 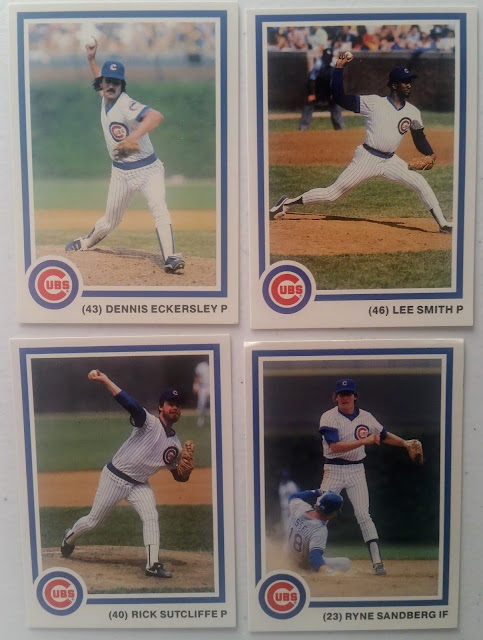 That's not to say that the superstars were lacking, though.  We have a staff ace and three Hall of Famers, including newly inducted Lee Smith, here.  The Ryno card was on the top of the shrink-wrapped set, so the corner is bent.  It is the only such corner in the entire set.  I keep imagining a bullpen of Eck and Smith, though.  I was too young to get baseball when they played together with Cubs, but how about a couple of the greatest closers in the same pen? 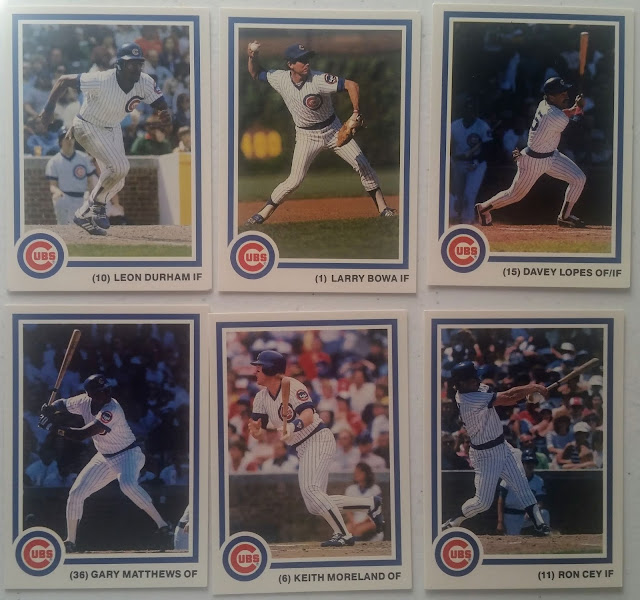 There were some other good players on the team, too, even if guys like Bowa, Lopes, and Cey were past their prime. 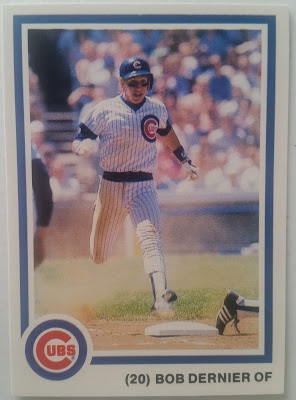 I even like the photography.  If I had heard about a 7-Up oddball from the mid-80s, I would have pictured a lot of bat on the shoulder, posed shots, but the photography is top-notch.  I still have no idea where this set came from.  Does anybody know?  It's a pretty great oddball set.

Let's not stop the oddness here.  I just recently got back on the trading horse at TCDB after turning off trade proposals in January to fix my scattered, inaccurate tradelists.  One of the trades I've completed this month came from nwcardsupplies, and he provided me with some oddball set help. 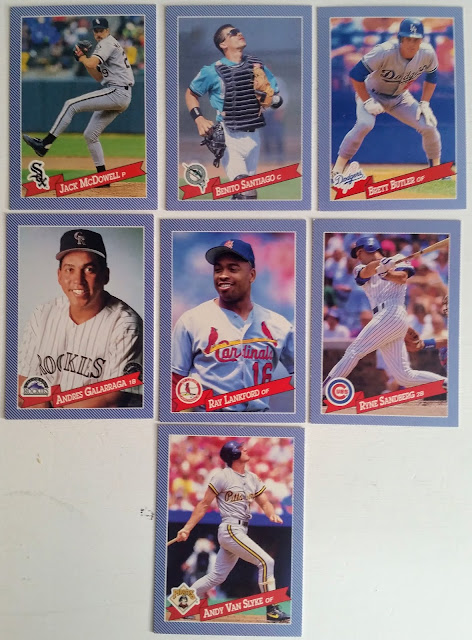 I don't know how many Hostess Baseballs I ate as a 10 year-old to get these cards, but I recently decided to go back and finish the set.  Nwcardsupplies got me within 8 to 75% completion with this trade.

Two transactions, 36 oddball cards, 2 junk food produced sets in one post.  I have to wonder how much sugar fueled this post.
Posted by Trevor P at 12:19 PM 3 comments: