The title quote, from Shakespeare's Twelfth Night, is a sad introduction to today's post.  I have come to the conclusion that I have had some cards stolen.  I must apologize to a couple of Adams, the proprietors of Cardboard Clubhouse and Addiction as Therapy as it appears I won't be able to post their trade packages.  I believe they have been stolen away.


As I began to ready my trade posts, I looked all over for the packages from those two fine gentlemen, but I turned the house over trying to find them.  I finally put two and two together and came to a sad conclusion: my car was broken into the week that those packages arrived, and I fear that I may have had mail day still sitting on the front seat of my car at the time.  The thieves removed my ashtray with all my spare change, and they must have grabbed the Priority Mail box in hopes that it contained something valuable.  I'm pretty bummed about it because one package looked like it might have 2015 Prestige set needs, while the other I had worked to get the Topps Now to commemorate Jake Arrieta's no-hitter.  I hope that I'm wrong and that the cards will turn up somewhere unexpected.  If that turns out to be the case, I will post them immediately.

All was not lost, however, as I did snag this unopened pack out of the package sent by Cardboard Clubhouse.  Let's look it over. 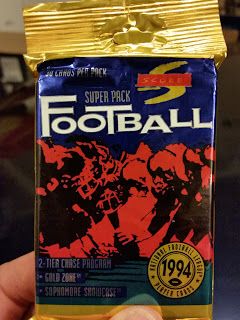 It's a jumbo pack of 1994 Score.  How wild is it that 1994 was over 20 years ago?  I believe I only busted one pack of this back in the day--purchased from my school's Scholastic Book Fair.  How do I remember this?  Well, I don't really know.  Maybe it's the random fond memories from school like that one that turned me into a teacher.  Anyway, I digress.  According to the package, I should expect a Gold Zone parallel inserted into each pack.  There is also a 1:4 chance of a Sophomore Showcase insert, which the package tells me is "full-bleed" with "gold foil stamping!"  Gold foil was just in its infancy, and Score seemed almost giddy to proclaim its use.

Here's a random sampling of base.  Purple and teal with a jagged ripped paper effect on the border.  This screams 90s.  I suspect that Zach Morris and A.C. Slater traded these at Bayside High before heading home to watch some TGIF.  The cards were slightly stuck together in the pack, but really not horribly stuck and I didn't really notice any damage from pulling them apart.

Here are some guys I collect, though some I collect more passively than others.   (Hello, Ed Murray. I'm glad you made an All-Decade team.)

There were three rookies in the pack.  All three were solid players, even if they were never stars.  Plus, two had memorable nicknames: "Big Daddy" Wilkinson and "Bar None" Floyd.

Here is the promised Gold Zone.

And what's this?!  A Sophomore Showcase insert in all its gold foil glory!

So even though the majority of this trade package was lost (and it was packed, too), I still had some fun with what I got. Thanks again to Cardboard Clubhouse and Addiction as Therapy.  I promise won't be so careless in the future and I hope this doesn't preclude me from any future trades.
Posted by Trevor P at 4:09 PM