As usual, I'm a little late to the party.  This time, it's P-Town Tom's party and he invited us to show off our favorite card of 2016.  I know that there has been a lot of apathy toward 2016's baseball card options.  The general feeling is that this year provided us with a lot of  "meh-ness."  However, I've generally been more satisfied with my baseball purchases this year than my football.  I didn't hate flagship as much as most.  Bunt was a breath of fresh air.  Archives was beautiful all around.  And while many have bemoaned getting sucked into Topps' Holiday Blizzard, I unabashedly bought the product after having seen it and loved it.  In football, the products I liked best turned out to be the ones that I didn't buy as much of.  That was just bad luck when I spent my money on products, sight unseen.  D'oh.  I completed the Donruss set, which I didn't care for much because it appeared to be modeled after 1990 Donruss, one of my least favorite designs.  I bought 4 blasters of Panini without seeing the product first--and absolutely hated it.  Absolute, Classics, and Playoff were good-lucking cards, though.  It was just too bad that I didn't have much left in the budget for them.

That said, any year when I can add a bunch of new cardboard to my collection is a good collecting year.  I still had plenty of options for card of the year.  There were some great cards that just didn't make the cut.  I considered these cards for various reasons: visual attractiveness, player, card concept, or subject matter.  Let me share the honorable mentions first. 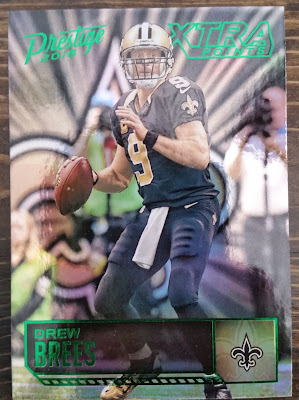 This card is visually stunning.  When I first pulled it, I thought that I had pulled some kind of sunburst refractor or something.  It turns out that the visual effect is the serendipitous combination of the shiny Extra Points parallel and the sing in the background behind Brees.  It's a beautiful card. 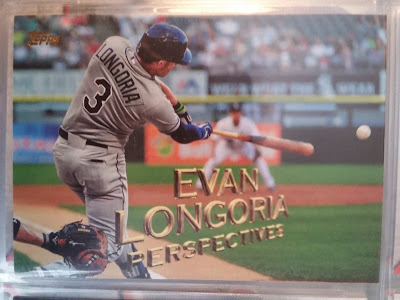 I really dig the Perspectives insert set.  My biggest issue with the set is it seems like Topps is trying to hide the player's name and the word "Perspectives."  Not in this card.  The text is very clear, but it doesn't get in the way of a perfectly timed shot of the ball leaving Longoria's bat.

Topps Back to Back #B2B-2 Anthony Rizzo and Kris Bryant 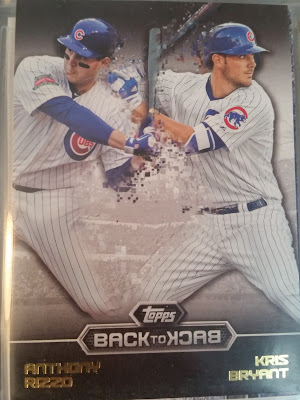 Let's just say that I will look forward to Bryant and Rizzo hitting back to back for a long time to come.  I don't have any numbers, but I doubt any duo went deep consecutively more often this year. 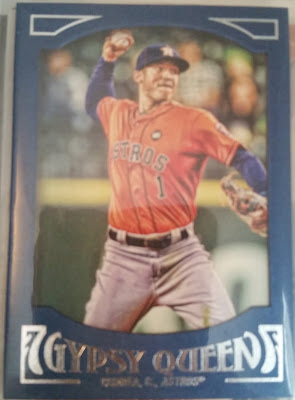 I always love GQ's framed cards, and I was very happy to pull one of one of my favorite up-and-comers to collect. 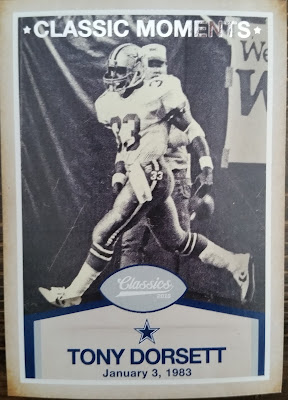 I still believe that Dorsett's place among the all-time great backs is underrated.  But this card celebrates his 99-yard TD run.  People, that's the entire football field!  And the Cowboys only had 10 men on the field.  This record is literally unbreakable.

And now, we have our Top 5.  After examining many cards, I went with one simple criterion: which cards were the most exciting?  I based my best cards of 2016 off of the level of giddiness/psyched-ness I had when I received the card. 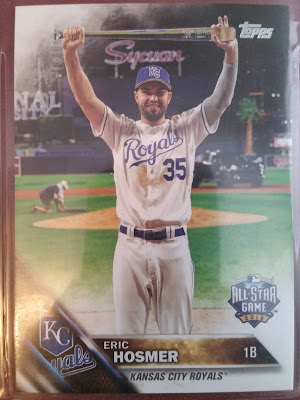 Big thanks to Tony Burbs for this card.  The All-Star Game has nostalgic value for me.  It was a mid-summer tradition for me, my dad, and my friends.  I represent this nostalgia in my collection by collecting All-Star MVPs.  Here we see most recent MVP Eric Hosmer accepting his trophy.  The black pickup on second base is a nice touch to the photo. 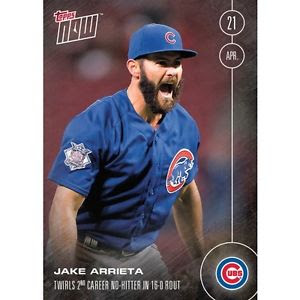 I am adamantly opposed to Topps' cash grab known as Topps Now.  But when I saw this card up for trade, I knew I had to have it.  Jake's two no-hitters in 10 starts got me really riled up for the rest of the season.  It was definitely one of my favorite baseball moments ever. 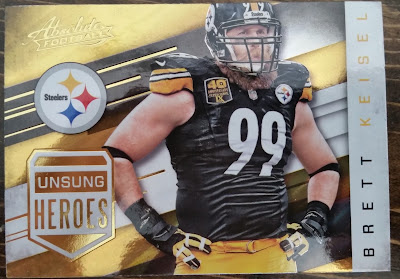 First of all, what a great set!  Nice design commemorating guys who are great players but don't get a lot of cardboard love.  When you add in a player who is BYU grad and, frankly, an unsung hero since his college day, I love it.  This card also came to me in a trade, this one from Tyler at Rekindling the Cardboard Flame. 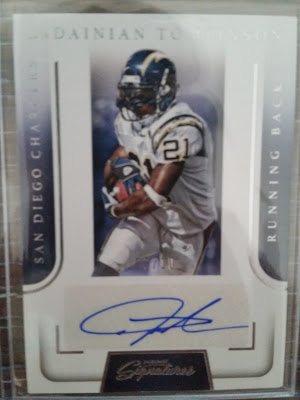 LaDainian Tomlinson was always one of my favorite players when he was playing.  I was stoked to pull a nice auto of him this year.  You can't see in this picture, but the card is numbered 3/10.  Nice-looking signature, too. 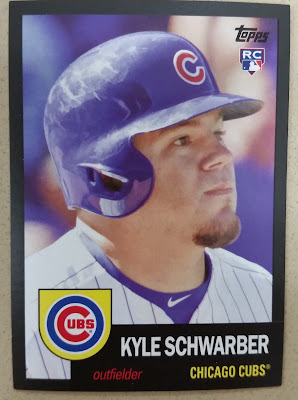 My 2016 Card of the Year goes to one of the greatest thrills I've ever had while collecting.  I bought a blaster of Archives and came across this beauty.  I thought it was great--until I flipped it over.  That's when I found that this was a 1/1!  Only the second time I've ever held a 1/1, and it was of a fan favorite, star rookie of my team!  I still feel a bit of that high every time I look at this card.  Now, I may have other cards that are much more visually appealing, but I judged my favorites of 2016 by excitement level, and nothing I have beats this one.
Posted by Trevor P at 6:43 AM