In a recent post, I checked out a Sportlots box for the first time and came away a pretty good sized "sportlot" of cards for my collection.  Around the same time, I decided to take a peek at a couple of auctions.  I don't usually look at the auctions on Sportlots, but this time around I found a few that caught my eye.  The titles were simple--things like "34 Stars Inserts Favre"--but they were on Day 3 with no bids, so I decided to check them out.  I saw a few cards I wanted in the photos and figured if I could win multiple auctions for cheap and get the combined shipping, it was worth a shot.  In the end, I won a trio of auctions for $.25 apiece, and with shipping, I had them for about $7 total.  I didn't know every card that would be in the lots, so I was taking a bit of a chance.  As it turns out, it was a pretty good chance to be taking. 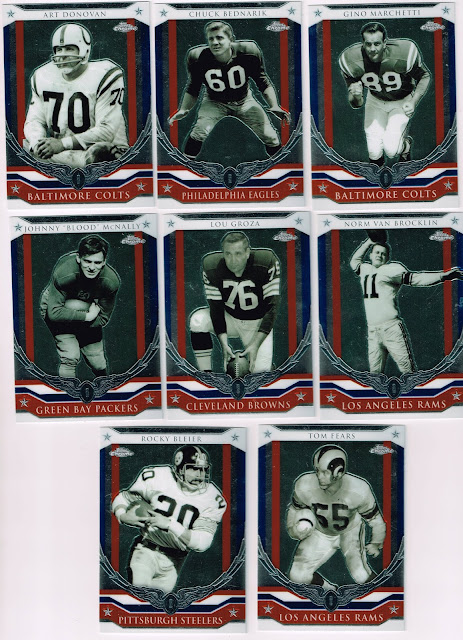 This cool insert set came from 2008 Topps and Chrome.  It honors NFL players who also served active military duty.  With all three lots combined, I picked up two copies of this set, minus one card.  I've since remedied that incomplete set through COMC.  After my Black Friday shipping this year, I'll have my Roger Staubach in hand and a completed set in my binder. 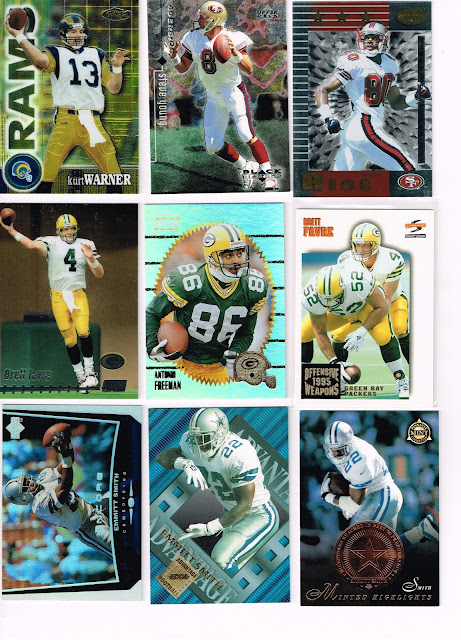 The lots were all given titles that included, "inserts," "stars," and at least one player's name.  Most of the cards were stars, inserts, or rookies, which made me happy.  I was a bit scared that I'd get one or two inserts or stars, and the rest would be 1990 Pro Set or something.  Stars from the 90s were well-represented, mostly in shiny. 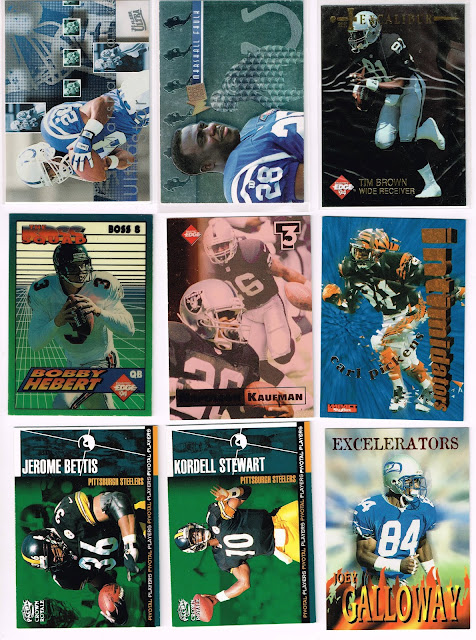 The Nineties provided some interesting insert sets.  I remember how cool I thought the acetone Collector's Edge cards were when I was a kid, but Bobby Hebert is the first I've owned.  I also loved the Ultra Stars and anything Fleer Metal at the time, both modeled by Marshall Faulk here. 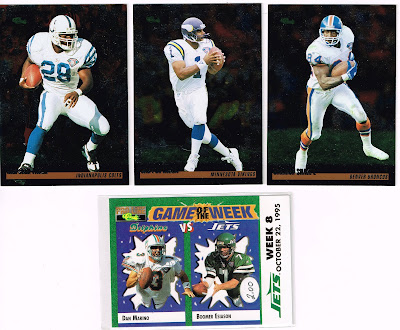 I don't know anybody who misses Classic, but I won't complain about parallels/inserts of a few Hall of Famers that I received. 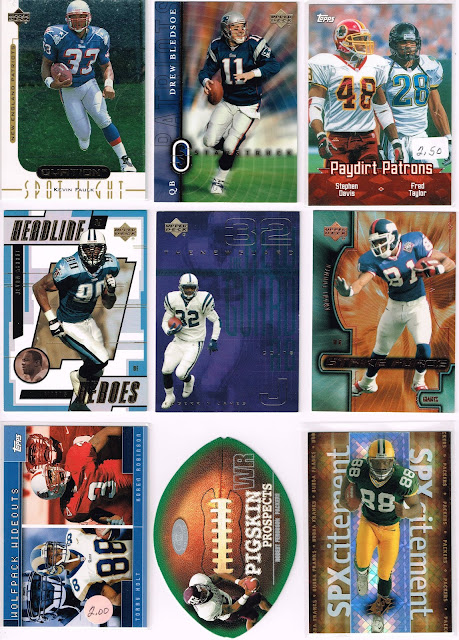 Early 2000s inserts were a cool find. Since I bought no cards during this period, there are still many sets I've never seen before.  Not only were the cards themselves pretty cool, there are some pretty good names here.  Most of these guys aren't NFL legends, but they were higher-tier players in their time. 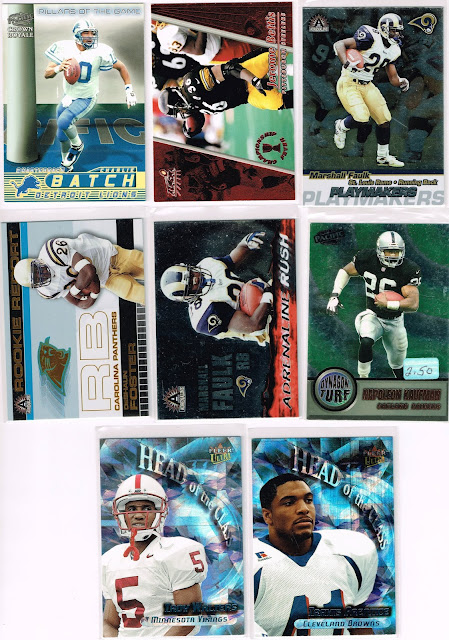 More late 90s/early 2000s inserts.  Marshall Faulk made quite a few appearances in the package. 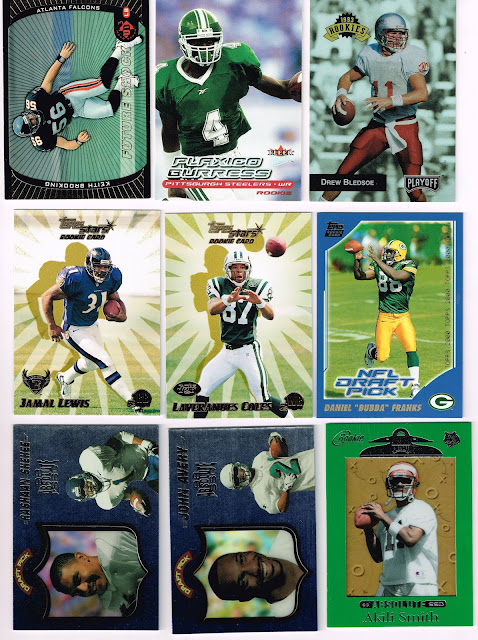 There were some nice rookies in there.  The Playoff rookies on the bottom row aren't the greatest (or even good) players, but those are some cool transparent cards. 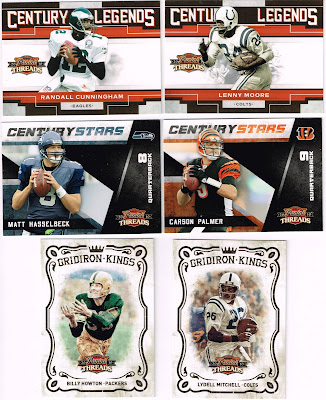 The inserts kept coming into the early 2010s.  These were the most recent cards in the package.  I like the inclusion of two underrated running backs in Lenny Moore and Lydell Mitchell, as well as Packer great Billy Howton. 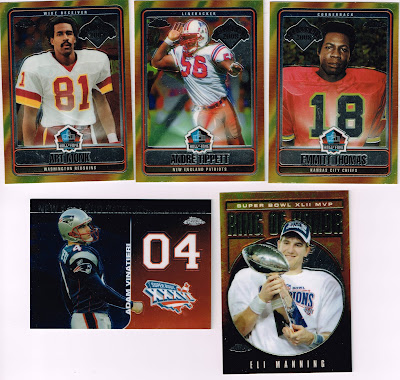 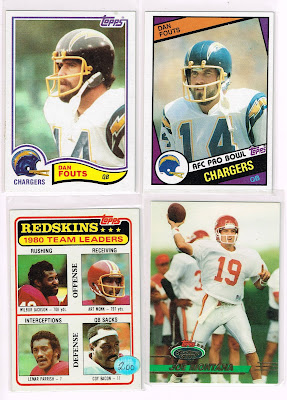 and some real 1980s cardboard. 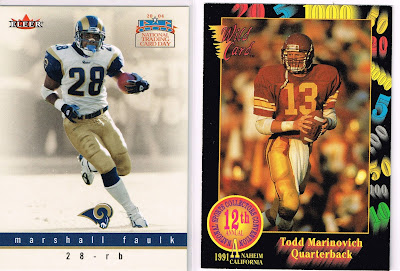 Finally, there were a few additions to my BYU collection.  Playoff was a quality card company in the 90s, and I have liked Panini's reincarnation thus far this decade.

I took a chance on some lots, and though I couldn't fit it all in my collection, I did get some pretty good cards for about six cents a pop.  I really don't feel there was any filler junk in any of the lots.  So, if you're browsing around auctions on Sportlots, and you see a lot from AAAVINTA, I can vouch that it will be filled with some pretty good cards.
Posted by Trevor P at 5:53 PM