It's not every day I get a package from a legend like Night Owl. In fact, we've never officially traded. I once claimed some Dodgers dupes he was trying to give away, and I think I sent him a PWE one time. So imagine my surprise when I saw his name on a bubble mailer last week. Inside was a team bag of cards and a half-apologetic note for the sudden influx of Diamondbacks. Wait, Diamondbacks?

Now, I don't collect D-backs. But I have mentioned a couple of times that my oldest offspring is a Diamondbacks fan. Am I to assume that the great Night Owl has paid enough attention to my blog to remember that detail? I don't know if that is the case, but I'll flatter myself that it is. Or maybe he is just a Dodger fan wanting to unload some hated D-backs and thought my western address was close enough to Phoenix. Either way, a good part of this stack is going to an 11-year-old who roots for Arizona.

Some cards he sent were 21st-century cards masquerading as something older. Mark Grace is still my favorite player, and I'm glad he got a ring with Arizona, but I wish it would have been Chicago. I think I'll keep the Gracie for myself. Maybe the card of Greinke homering will stay with me, too. But the rest of these cards are going to my boy. 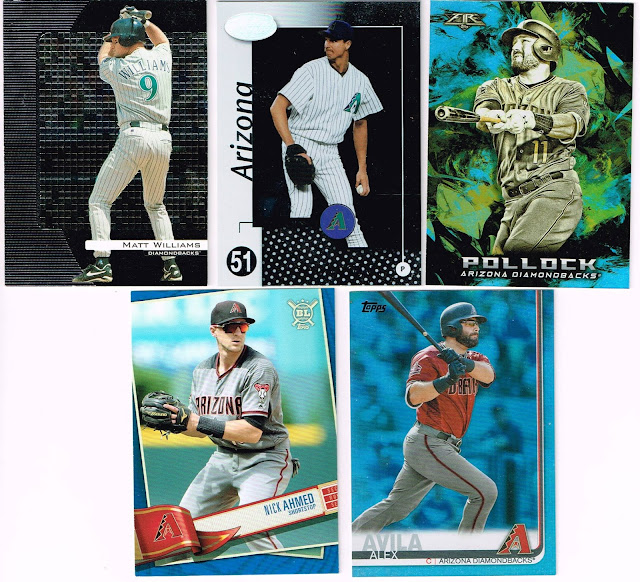 Night Owl sure sent a lot of shiny, like Black Diamond, Certified, Fire, and Rainbow Foil. AJ Pollock was my son's favorite D-back until he departed last year. 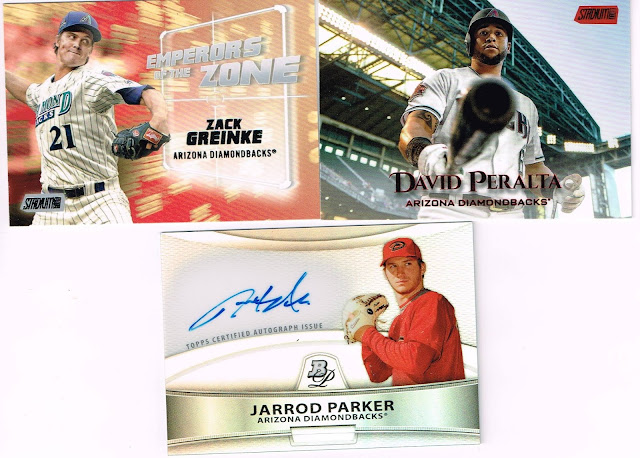 Now he tends to root for David Peralta. Well, my boy, Night Owl has you covered. More shiny here, in the form of a Jarrod Parker auto. Parker made only one appearance for Arizona before being traded to Oakland. He was a pretty good pitcher for a couple of years before two Tommy Johns did him in after his second full season in the Majors.

I've now received 2 packages from Greg. Interestingly, the contents of both packages went to kids--one to an aspiring Dodgers fan in my nephew, the other to a young D-backs fan in my son. Yes, Night Owl is part of the effort to build a rising generation of collectors. I'll get a return package put together sometime in the near future, Greg. Thanks for the surprise!
Posted by Trevor P at 9:42 AM