I love collecting BYU football players. Over the past few years, it has been my favorite collection to grow. It feels like college connections are less common than pro fandoms among collectors, so barring the few NFL superstars that the school has produced, I usually have little competition in getting cards and many of my trading partners are probably happy to unload the common BYU cards I request in trades. But anybody who pays attention to football news probably realizes that this year, I will have competition for a certain young QB. Zach Wilson just became the highest NFL draft pick to ever come out of BYU, going #2 overall to the Jets. I anticipate that I'll have some trouble trying to pick up Zach Wilson cards at price points that I feel comfortable paying. But I have been at it already. 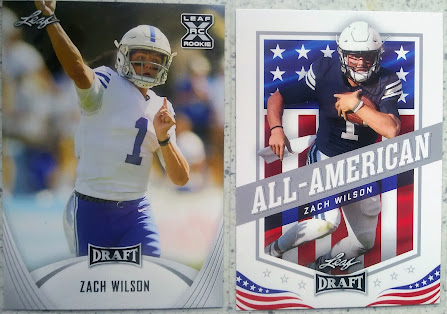 Leaf Draft dropped last month and I entered a player breaks, trying to score Wilson. I didn't win any breaks, but I was able to pick up both of his cards in the base set on eBay afterward. These two cards cost me just $2 shipped. Here's the crazy thing: I didn't read the listing carefully and I didn't realize that the All-American subset card was part of it. I thought I was only buying the one on the left. That was a nice surprise.

In the meantime, I bought another single of the All-American card. This was a surprise, too, because the seller sent me 3 copies. He included a note that said he sent all three because there was chipping along the left side on all three backs. But I wasn't too concerned about that. Now I just have three copies of this Wilson! 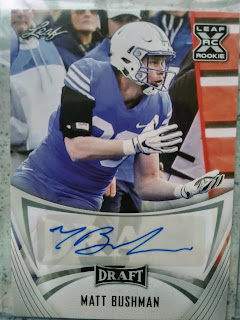 The one Leaf player break I did win was Matt Bushman, and I ended up getting lucky enough for auto. You know, BYU sent 12 players to the NFL this year, five drafted. At this time last year, I would have said only two players on the team were NFL-caliber: Bushman and Khyris Tonga. Then the team exploded into the national spotlight--and Bushman didn't even play. He suffered a season-ending injury on the first day of training camp last August. So for the hype surrounding the Cougs last season, Bushman missed it all, but still received a UDFA contract from the Raiders.

While searching for other Zach Wilson cards on the cheap, I came across these that are copyrighted by somebody called "Rookie Gems." Normally, I don't go for customs, but since I have seen other Rookie Gems on eBay, I figured they were probably decent quality. The artwork is pretty good, too, so I liked the look of them. Since I worry about finding any cards that I can afford, I decided to try these for the novelty of it.

Here are the backs. I have to say, these Rookie Gems cards, while well-designed, look much better in pictures on the computer screen than in-hand. The cardstock is awful and pretty much every custom I've ever received from you bloggers is higher quality. But at least they'll be somewhat unique in my collection. 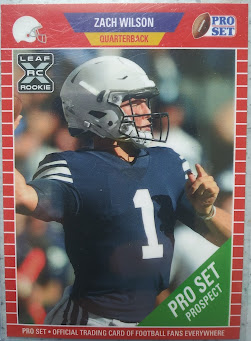 Leaf brought back Pro Set this year, and I was happy to find this one in a Jets lot. For under $5, I picked this card up, along with some other Jets cards, including a Darrelle Revis rookie, a numbered relic of Revis, and a relic of Leonard Williams. How I was the only person to jump on this lot, I don't know.

My first cards that have all the licenses to include legitimate uniform photos came from Score. I was lucky enough to pick up this lot for around $3 per card. That happens to be more than I would like to spend, but it was reasonable to me, so I jumped on it. As more football releases have come out, the Zach Wilson cards I'm seeing are more expensive, so I'm glad I picked these up. My Wilson collection has a decent start now. 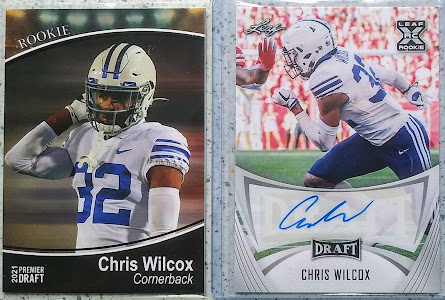 Chris Wilcox is another player I failed to win in a break. Luckily I found this lot for just a tad more than a dollar per card.

So I've been pretty busy on eBay, at least by my standards. But many of my TCDB trades this year have brought in some former Cougars. To finish my outstanding TCDB trade posts, we'll take a look at BYU players I've swapped some cards for. 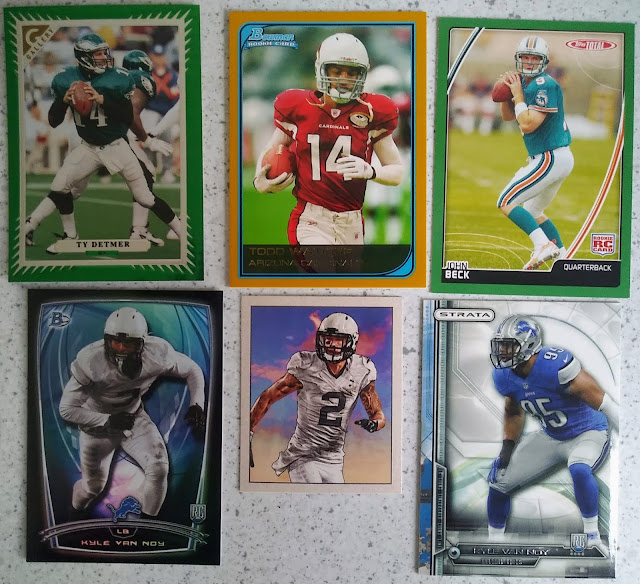 Kyle Van Noy rookies. And I love that retro Bowman of all-time leading receiver, Cody Hoffman. For my money, I would have pegged John Beck to have a better NFL career than what I've seen from Zach Wilson, so I hope for Zach's sake I'm wrong. By the way, if you watched any BYU football games last year you probably heard about the Beck-Wilson connection, when Zach used his time off of campus during the pandemic to drive to California and train with Beck. 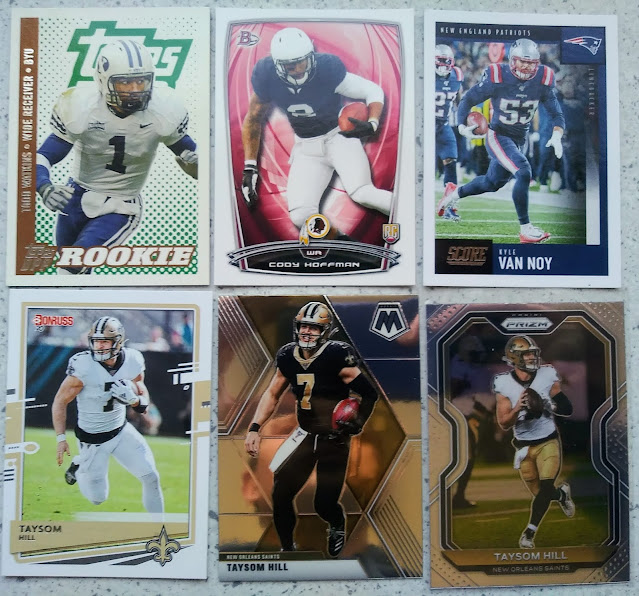 Taysom Hill. Will he beat out Jameis Winston to replace Drew Brees? If he didn't claim the job outright last year in his extended audition, I'm not sure it will happen. But Sean Payton seems to love him, so we'll see. 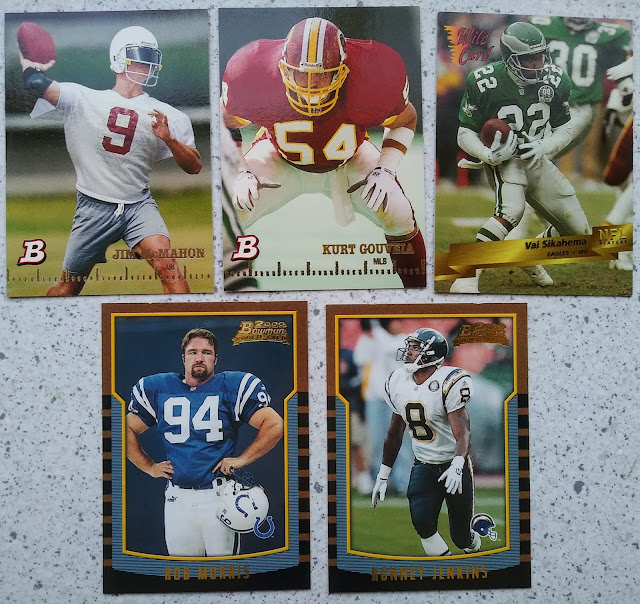 How about some Cougars with Super Bowl rings? McMahon, Gouveia, and Morris all have one. Vai Sikahema was the first Tongan to play in the NFL. Ronney Jenkins didn't finish his college career at BYU because he transferred to Northern Arizona, but he managed to score 29 total TDs in his two seasons with the Y. 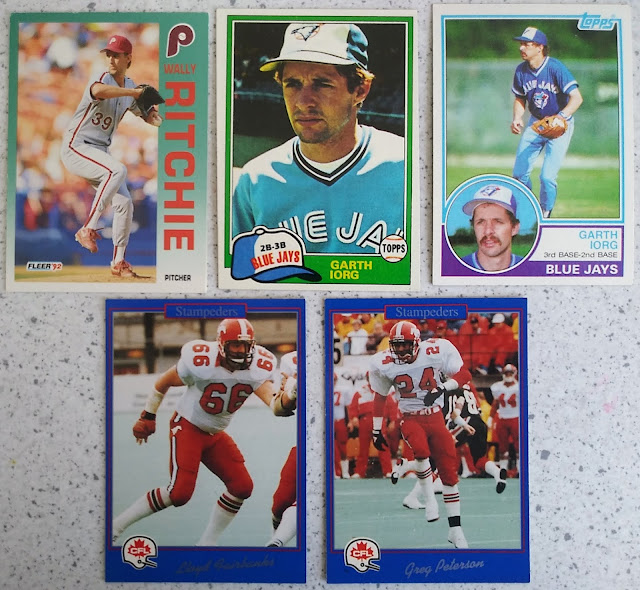 Some baseball Cougars and a pair of football players who found themselves playing in Canada. Sweet CFL cards. 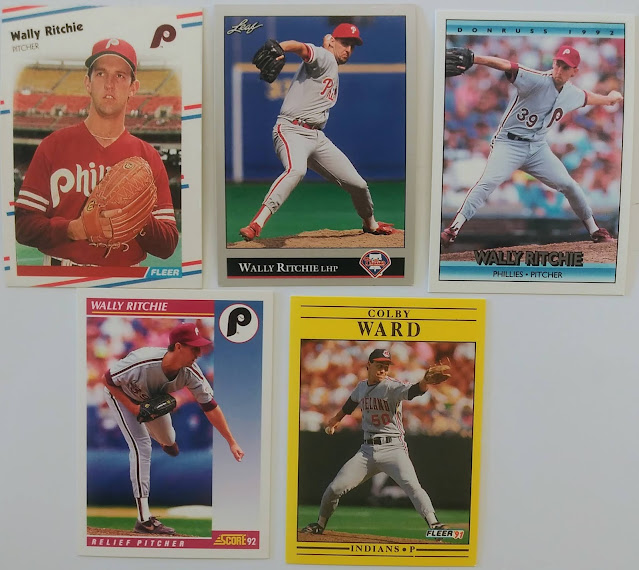 And we'll end with these former BYU baseball players. And speaking of baseball, I need to wrap this up to get my sons to their little league games tonight. Go Mets and White Sox (little league-wise, that is)!

Email ThisBlogThis!Share to TwitterShare to FacebookShare to Pinterest
Labels: BYU