Some of the collections I have been working on over the years are starting to get filled out and my goals are being reached. As a result, I'm starting to slow down a little when it comes to acquiring many cards for some of my mini-collections. Now that the collection is feeling more and more complete, I wanted to start showcasing the cards I have, player by player.
One such collection is my Rookie of the Year collection. I love collecting players who have won the award as the top newcomer in each league. This wasn't born of hot rookie hype and the desire to prospect. Rather, I became fascinated thinking about the careers of guys like Eric Karros, Jerome Walton, and Tim Salmon, who experienced varying degrees of success but may not have become superstars. I thought it would be fun to have a collection that chronicles the individual career journeys of rookie stars--whether they burned bright and flamed out quickly, regressed to the mean, or wended their way to Cooperstown.
My goal has been to fill a binder page for each player who won the award in my lifetime and to fill a row for older players. I may expand that later as I expand my vintage collection. The ultimate goal of my binder is to show a card from every different uniform the player wore, from fresh-faced rookie to grizzled vet. This series is to commemorate each Rookie of the Year's career and show my collection of their cards. I have a randomized list of winners that I use to determine the order of these posts, but for the second time in a row, I'm going away from that order. Today we highlight 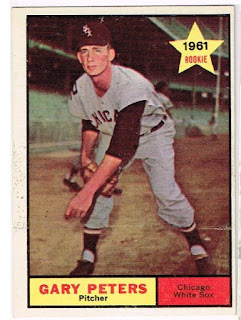 From 1959-1962, Gary Peters did some stints on the Chicago White Sox roster. He saw very limited action in those seasons, accumulating just 21 innings in 12 appearances. When 1963 rolled around, he was four seasons past his Major League debut, but still maintained rookie status. That first full year, Peters appeared in 41 games, starting 30 of them. He struck out 189 batters and posted a very good 1.04 WHIP. He led the league in FIP, HR/9, ERA+, and, of course, the only of these stats that would have really mattered back then, ERA. He also held his own at the plate; he batted .295 with 3 home runs in 81 at-bats. When the Rookie of the Year voting was settled, Peters received 10 first-place votes to beat out teammate Pete Ward (6 votes) and Jimmie Hall (4).
For most of the next six season, Peters was solid. He paced the AL with 20 wins in 1964, and his 1.98 ERA and 0.98 WHIP were tops in 1966. He earned All-Star nods in 1964 and 1967. He started to slip a little in 1969, when he led the league in a different category: Earned Runs. Following that season, the White Sox sent him (with Don Pavletich) to the Red Sox for Syd O'Brien, Gerry Ganeski, and Billy Farmer. He spent three years in Boston, but his career was winding down. The statistics tell the difference in the pitcher he was early in his career with Chicago compared to later on in Boston. In 11 seasons with the White Sox, Peters registered a 2.92 ERA, 1.19 WHIP, and 115 ERA+. In his final three years with the Red Sox, those numbers went to 4.23 ERA, 1.43 WHIP, and 89 ERA+.
One month after he pitched his final game of 1972, the Red Sox released him. That was the end of Gary Peters' career. In total, he won 124 games, recorded a solid 3.24 ERA, and struck out 1420. He received MVP votes in three seasons and two total All-Star nods. A career WAR of 28.4 was solid, but definitely not enough for serious Hall of Fame consideration. 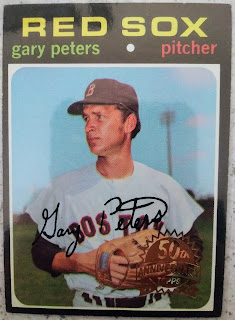 So why am I breaking by order to highlight Peters today? Because The Diamond King posted this card as one of his Flash Freebies a couple of weeks ago. I needed a Peters card depicting his stint with the Red Sox, so I claimed it. It wasn't until I received the card that I noticed this was a buyback. You have to look closely for the gold stamp in the corner. Thanks to DK, the Gary Peters section of my ROY collection is complete!
I should also take a moment to mention the two newest members of the ROY club (and players I intend to chase): Randy Arozarena and Jonathan India. At the time of their announcement, I owned one card of Arozarena, but it was part of a set build. I have collecting to do for the new guys.
Posted by Trevor P at 1:27 PM