I've been on collection hiatus for a little while.  Some of that is self-imposed--I resolved not to buy any cards in the month of February and I've turned off trading on TCDB to save some postage money and to fix up my tradelists.  That doesn't explain my absence of blogging, however.  That's due to outside factors.  I've been focused on many other things that are pushing blogging aside.  It's not the lack of new cards that has me lacking for content; on the contrary, I'm backlogged for material.  Blogging just hasn't been a priority.

Before this hiatus, the last cards I received came on Super Bowl Sunday.  I came home from church to a big envelope on the front porch.  I knew in my bones that it contained cards for me, but I had no idea where a package that size was coming from.

As it turns out, the package was from Kerry at Cards on Cards and it contained my winnings for his annual college football bowl pick 'em.  Let me just take a moment and proudly proclaim that I am the Cards on Cards Pigskin Prognosticator Extraordinaire!  I swept the prizes this year by correctly predicting the Belk Bowl winner (Virginia) and being least awful in predicting the final score, and by scoring the most points in the pick 'em.  (Thank you Clemson, for justifying my faith in you.)  I'm not meaning to brag here, but you'll have to excuse me while I revel in this victory for a moment.  This kind of glory doesn't come my way often.

The prize for the Belk Bowl was a jumbo pack of 2019 Flagship and the prize for the pick 'em was a blaster of the same.  Kerry also threw in a stack of Cubs for me.  And so it was, on the biggest football-based holiday of the year in America, I opened up a package full of baseball cards. 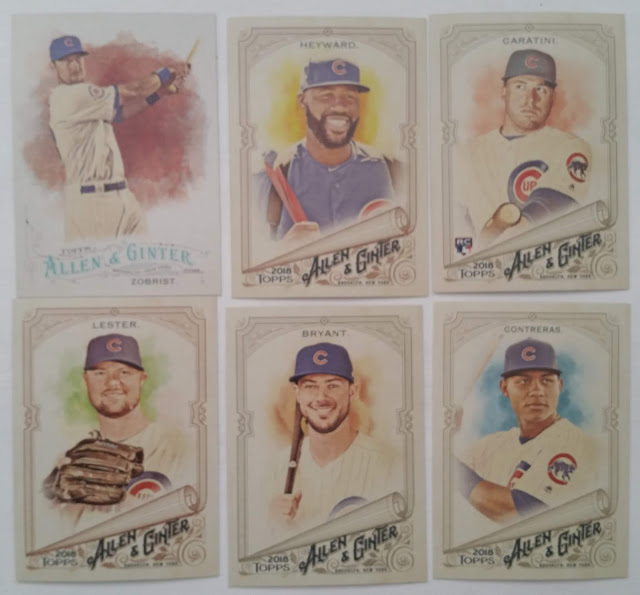 I've never bought A&G.  I think I've only seen it in stores once.  That doesn't mean I don't like the base card designs, because I typically do.  I especially like the rolled parchment look from last year. 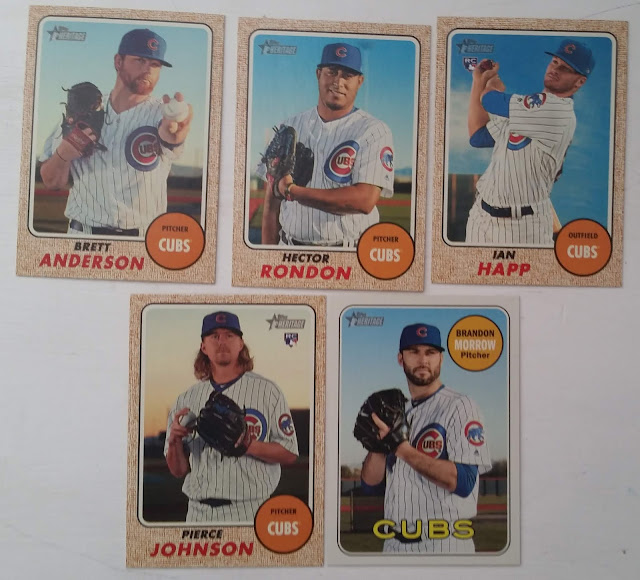 In 2017, I completed the base set of Topps Heritage, but I didn't do anything with High Numbers.  The burlap you see here are all High Number Cubs that I didn't have yet.  Last year's Heritage has plenty of holes for me, and Brandon Morrow filled one here. 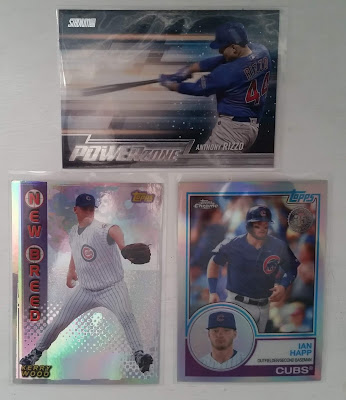 Some cool inserts here.  I really like the refractor look of the 1983 inserts in last year's Chrome 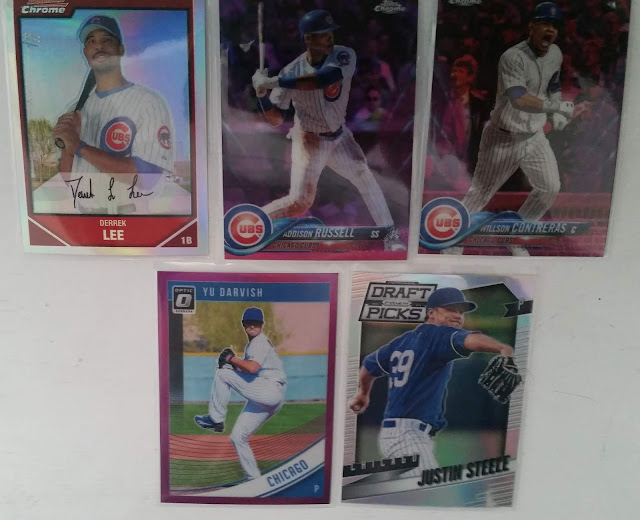 And speaking of refractors, here are some that Kerry threw in.  I really like the Derrek Lee and Willson Contreras cards.  I do have to say, though, that I think I preferred it when the pink refractors had only a pink border and not a pink everything.  Logoless Yu Darvish proves that to me here in Donruss Optic.

And now, for my first 2019 cards, starting with the jumbo pack. 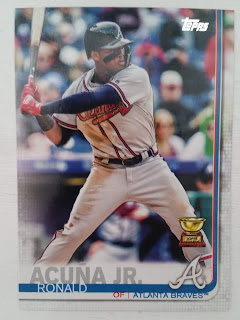 Ronald Acuna became my first 2019 card.  That's a pretty good pull to kick off the year, and it slides right into my ROY binder. 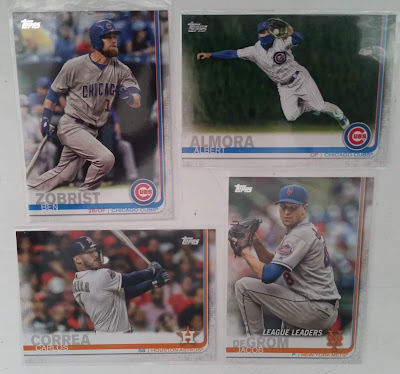 There were a few more keepers in this pack.  Masked, flying superhero Albert Almora makes a great shot on his card.  Jacob deGrom is in my collection, but this is the first time I've seen him on a card without his billowy hair. 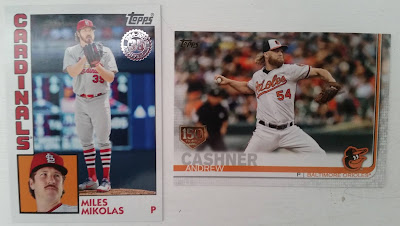 I pulled one insert and a parallel from the jumbo pack.  The Mikolas might go right back to Kerry, if he wants it.  I really am not a fan of the 150 years stamp on the cards, but here is one. 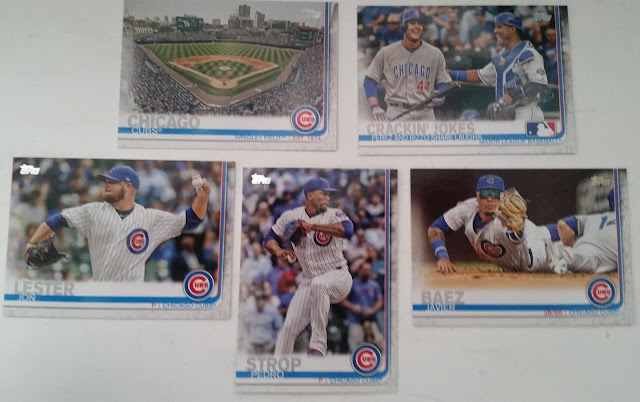 The blaster yielded some more Cubbies.  Javier Baez is my current favorite Cub, and this card is an early frontrunner for my favorite card of the year. 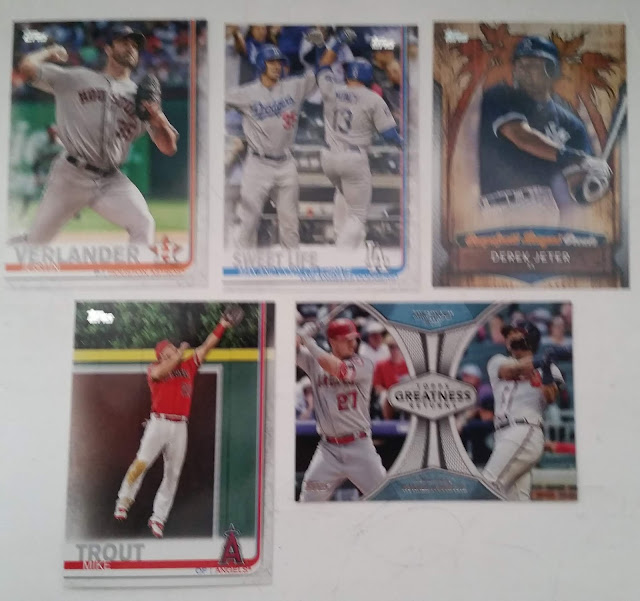 The picture turned out really blurry, but here are some more keeper cards from the blaster.  I like the idea of Spring Training themed inserts, but this particluar Grapefruit League Greats sets comes off kind of flat to me.  As for the other insert, I'm normally kind of lukewarm toward players sharing cards, but how great is the combination of Mike Trout and Ronald Acuna!  I don't know what kind of career Acuna will have when it's all said and done, but he will always have a spot in my collection, along with Trout. 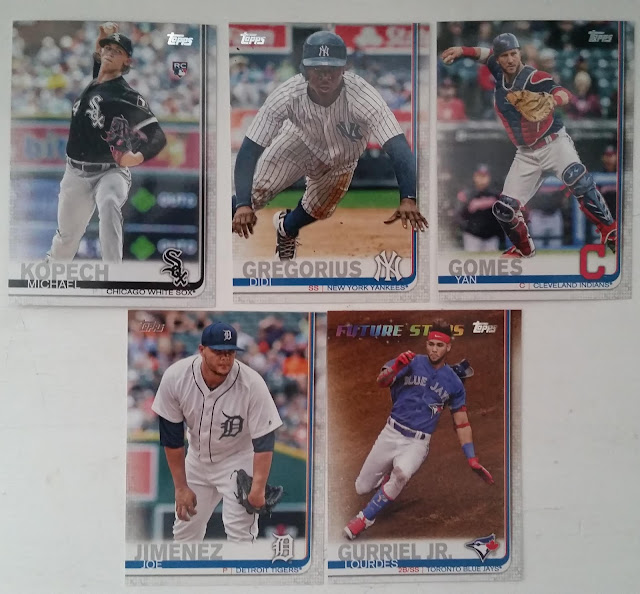 Here are some other cards I liked for one reason or another.  I think my favorite here is Didi Gregrorius sliding through the border, right off the cardboard, and into your face. 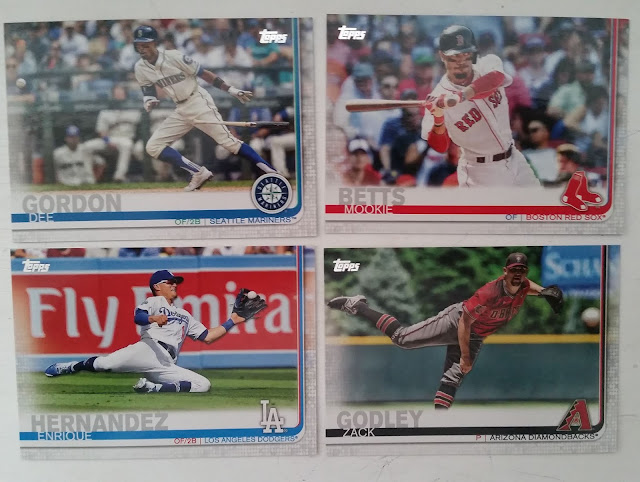 More cards I like, this time in horizontal form.  I love that the photographer just caught the ball from Zack Godley's pitch right before it slipped out of the frame. 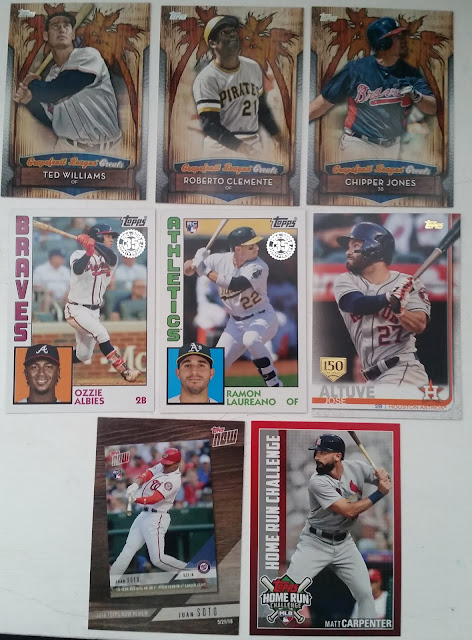 Here are the rest of the inserts.  Most of these are up for trade, although I think I'll hold on to the Clemente and play the Home Run Challenge with Matt Carpenter.  What date should I choose?  Definitely not one against the Cubs.  I could never root for that.  I already mentioned that I don't care for the 150 Year stamp, but I do like Jose Altuve.  I'll admit that the stamp does seem to add a little to the card in this case.

I know I'm way late to the game here, as everybody has already shown off their Flagship and is moving on to Heritage, but here is my thought.  I like the design.  I think it will one that I will be able to immediately recognize in the future.  I think I liked 2018 waterslide/tidal wave a little more, but this one is certainly good to me.

Thanks to Kerry for the contest and the generous prize.  In case you're wondering, these are still the last cards I have obtained, way back from the beginning of February.  I am hitting a card show next Saturday, though.  I haven't been to one in about a year, so I'm really looking forward to it.  Maybe someday I'll even get around to posting what I pick up there.
Posted by Trevor P at 2:36 PM