Before I finish posting about my 2020 Opening Day break, I should probably post about another baseball box I opened first.

Growing up, I never really liked 1988 Score. I think it was because the only cards I owned from the set were the yellow and orange borders, which I thought were pretty ugly. Still, when I found 3 boxes of early Score, including 1988, for about $5 a box, I decided to pick them up for a bit of a fun break.

There was an issue with this box. If you look at those corners, you'll see they are all white and fuzzy. They're not damaged, rounded corners. Rather, they are extra tags on the corners, as if the sheets of cardboard were not fully cut. Almost every card in the box had this problem.

If I had any hope completing the set from the box, or at least getting a good start on it, that hope was dashed by the collation. Nearly every card I pulled was pulled one or two other times from the box as well. I ended up with well under 50% of the set, but with triples of most of those cards I did have.

I found that the design wasn't nearly as bad as I had remembered. In fact, all of the colors are pretty good. The backs are great, reading like little encyclopedia entries for each player.

Still, I wasn't moved to chase the set, despite considering how nice this rainbow might look in a binder. I tried to use only Hall of Famers to show these rainbows, but Robin Yount is the only HOFer in blue, and Carter is the only red bordered HOF card I pulled. Being able to showcase the awesome "Terry Franconia" error is a nice consolation, though.

Maybe it's the use of dark yellow and orange, comprising about 1/3 of the set, but I started thinking about sunset cards in this set. It turns out, this set contains the sunset cards for some pretty big names.

And yes, they are all sunset colors. These three players all retired after the 1987 season, making these 1988 issues sunset cards. All three had good careers. Bochy would go on to an outstanding managerial career after his playing days. Garvey probably should have moved on to Cooperstown after retirement, but he hasn't gotten the call yet. Perhaps he and Bochy will someday make it, for different reasons, though Garvey faces tougher odds. Then again, the Veteran's Committee let Harold Baines in, which I still don't understand, so all hope is not yet lost.

Reggie Jackson's career was commemorated with an entire subset dedicated to him in this set. Jackson doesn't have a regular base card in this set, so I don't know if these count as "sunset" cards. 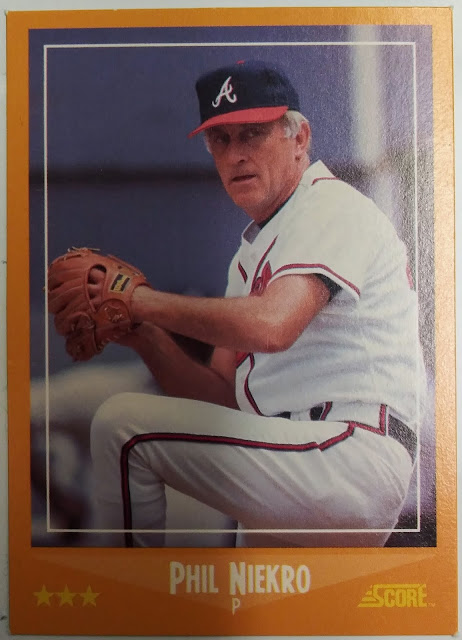 Which means, I think, that this guy is the Sunset King of 1988 Score. Jackson and Niekro are the only Hall of Famers with sunset cards in the set, but Niekro is the only one with a regular base card. After 24 years and 864 appearances on the mound, a fully gray-haired Phil Niekro retired after the 1987 season and received this in his honor after hanging them up.

From this box, I kept the Hall of Famers for my HOF binder, all of the Cubs, and all of my PC guys. The rest of the cards (hundreds of them), I don't know what to do with. The little tags on the corners prevent me from trying to pass them on to others, so I'm stuck with a ton of colorful borders. Some are very bright and attractive, while others are ugly shades of yellow and orange. At least there is some semblance of sunset in the set.
Posted by Trevor P at 6:30 AM