My kids don't follow sports the way I do. They take a barely casual interest in it, once in a while asking me how the Jazz or D-Backs are doing, but they don't pay much attention to professional sports. They enjoy playing on their Little League teams, but that's about it. But they understand my obsession and little traditions, which led to this exchange with my oldest on April 1.

Son: "So are we going to go get some cards?"

My wife barely tolerates my collecting, so I have stopped trying to get the kids involved because it bothers her so much and they don't seem to care. But they do know the Opening Day tradition of cracking some baseball card packs. That is pretty much all they get of cards for the year. For me, Opening Day for baseball is "Opening" Day for a box of cards, sometimes the only box I'll get to break for the year. It certainly looks that way for this year, and I explained to my son that I didn't buy them any packs because cards are nowhere to be found right now.

But I did have my pre-ordered box of Topps Opening Day on hand for my opening. 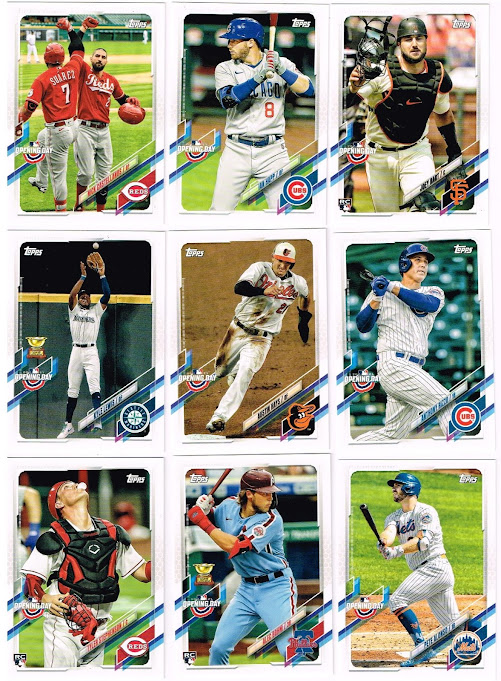 I've seen Flagship going around on the blogs, and the consensus is that it's not Topps' best effort. I've seen pictures, but this is the first I've seen the design in hand. And I have to say that I don't hate it like expected. In fact, I kind of liked it as I sifted through the pile and sorted the set. The small name font didn't bother me like I thought it would (full disclosure: my eyesight is still nearly perfect, so you might have to give me a few more years to take issue with it). I think it's my favorite Flagship design since at least 2018, and maybe even longer. We'll see how my opinion evolves as time goes on.

There was one major beef I had with this box: for the first time in my tradition of opening Opening Day on Opening Day, the box did not yield a complete set. I'm still 13 cards away from the base set. I received only two dupes, so the reason I fell short of the base set was the number of inserts I pulled. The two dupes, for those interested in trading, are #26 (Brett Gardner) and #63 (Carlos Correa). 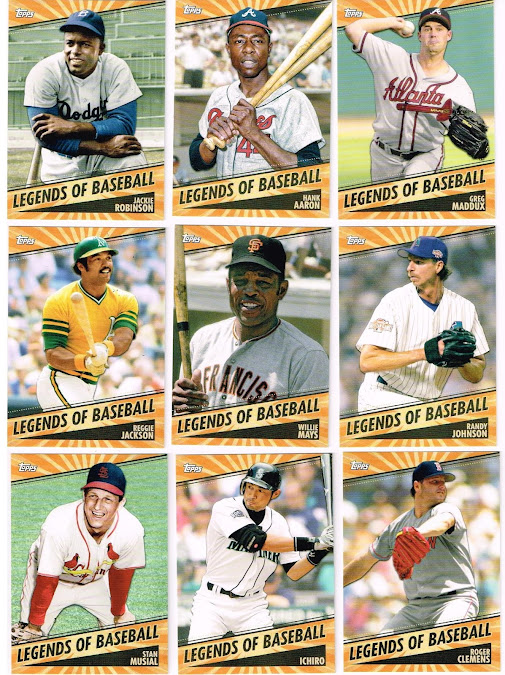 Even though I like the base design, I've already decided that I won't be buying any unopened packs of Flagship because I don't like the inserts. The Flagship inserts are too much of the same thing, regurgitating past designs and expecting me to chase them. Well, I won't. Inserts have typically been better in Opening Day, but this year, I was underwhelmed here too. Take this set: it's a good checklist and I considered building it, but the look of it is just "blah" to me. After sitting on the decision for a few days, I decided to keep Jackie, Willie, Ichiro, and Roger for my collection, but the rest are up for trade. Oh, and I pulled two Jackie Robinsons, so I have a copy available of that one, too. 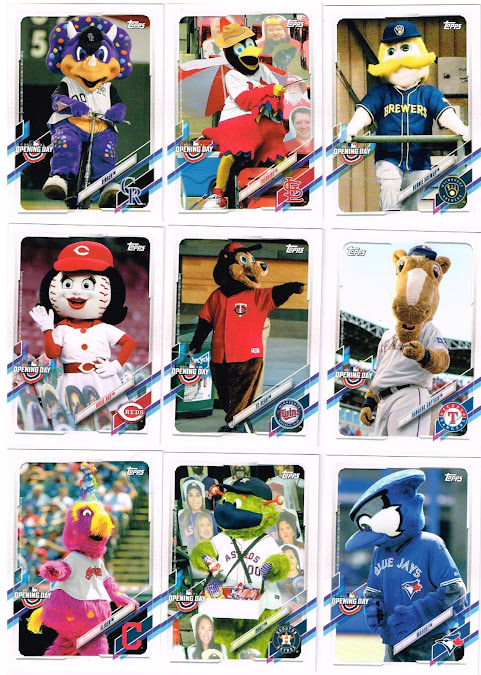 Mascots are a yearly Opening Day staple, but I don't collect them. All of these are available, plus a few others that I didn't scan. And I have two copies of the Blue Jays' mascot, Ace. 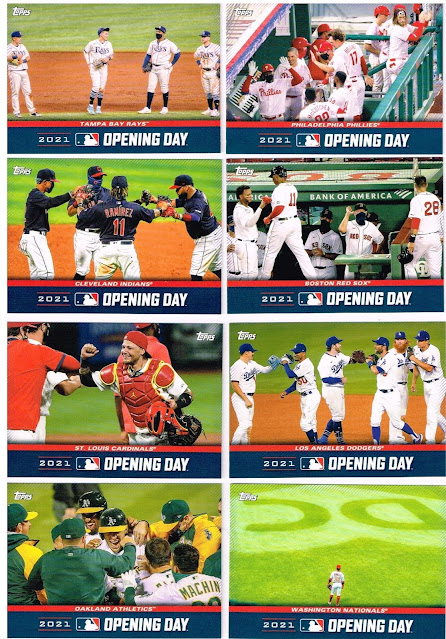 The Opening Day insert is also a staple. Some years I chase it; some years I don't. It's a "no" this year. I also received a dupe of one of these cards (though I forget which one right now). That makes three insert doubles in the box, while I didn't even get my base set! All of these are up for trade  if anybody is interested. 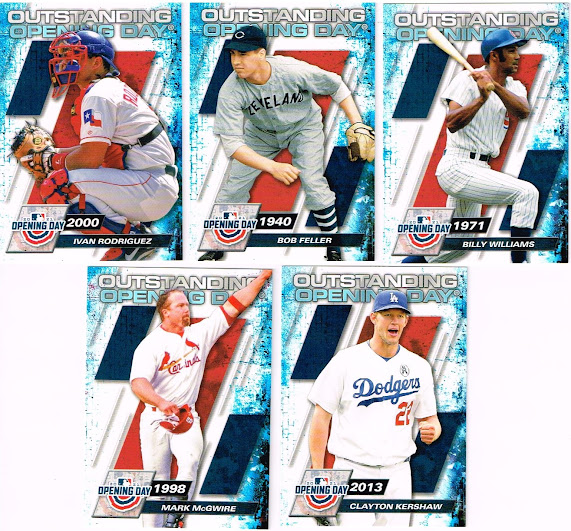 Ahh, now here is the set that I want to complete. These five get me halfway there. I'd be interested in trading for the other five if you've got them available. I like the looks of this one and I like the commemoration of Opening Day achievements and not just the ballpark on that day.

Of course, there is the annual blue foil parallel, which allegedly has a print run equal to the year, but is never serial-numbered as such. These cards look pretty good, but I'm not interested in any of these players, so all are up for trade here. 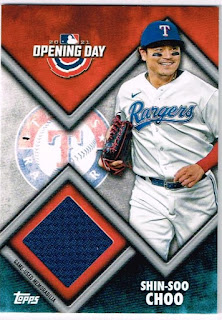 And for the third straight year, I beat the odds (1:228 this year) and pulled a relic.

So there's good and bad. I ended up liking the design way more than I expected. I pulled a non-guaranteed hit. But the inserts were somewhat uninspired and I ended up with insert dupes. Plus, the relic took up the space of three cards, so I think I would have preferred to get closer to the base set, which I didn't polish off in one box this year. But it's always a fun break and I've already received a trade offer on TCDB this morning that will net me six of the thirteen set needs. The other seven are posted on my Want List page. If you see something you want here, let me know and let's trade!