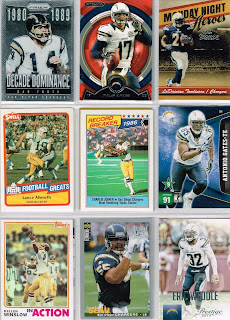 The last time we did this, we saw the Rams' top nine players in Super Bowl Era history. Let's stay at SoFi Stadium and hit the crosstown Chargers. The Chargers don't have the same long franchise history and the same level of success over the years that the Rams have had, but they always seem to field a consistently good team that never makes it over the hump. As I put together this team, I found that the strong suit for the Chargers is typically the offense. This makes sense, considering that coach Don Coryell developed his pioneering air attack in San Diego. It's almost team tradition now to have a high-octane offense now.

Speaking of Air Coryell, it didn't work without a quarterback who can sling it. That's what Dan Fouts was. When he retired, he was second in NFL history in passing yards and fourth in passing touchdowns. He led the NFL in passing yards four straight seasons from 1979-1982. He earned two All-Pro nominations, a spot on the 1980s All-Decade Team, and a bust in Canton.

But was Fouts the best Charger QB? Philip Rivers may have something to say about that. Statistically, he is ahead of Fouts is every category. He has more career Approximate Value than Fouts. He played in two more Pro Bowls than Fouts. I know the two eras are very different, which makes comparison difficult. I'm not going to pronounce one better than the other here because my purpose is simply trying to find the players to make this list. They both did. Suffice it to say that Fouts has a spot in the Hall of Fame and Rivers has a spot on top of every passing category in team history. They both earned their place here.

Here is where LaDainian Tomlinson ranks in team history: #1 in rushing yards (outpacing #2 by nearly 300%), #1 in total touchdowns, and #12 in receiving yards. Yes, Tomlinson was so versatile that he missed the top ten in receiving yards by under 1000 yards--from the backfield. He even threw seven touchdowns. There are Chargers quarterbacks who started multiple games who threw fewer TD passes than LT. In 2006, he took home the MVP award as he set the NFL record for most TDs in a season (31). He was arguably the greatest weapon in the game during the early 2000s.

It has been over 50 years since Lance Alworth left the Chargers. In that time, the game has changed drastically. It has become a passing league. Passing numbers have skyrocketed since that time. And yet, only one player has passed Alworth on the Chargers' all-time receiving yard list. At the time he moved on from the team, he was #2 in the NFL history in receiving yardage. From 1963-1968, Alworth had a string of six consecutive 1st-Team All-Pro nods. Not only is he in the Hall of Fame, he was also named part of the the NFL's 100th anniversary All-Time Team.

The card of Charlie Joiner above is a little misleading. In 1986, he became the NFL's all-time leader in receiving yards. One might assume that he is the one who surpassed Lance Alworth for the franchise lead. That is not the case. Joiner played elsewhere before going to San Diego. For the franchise, Joiner ranks 3rd. However, most of that NFL record was accomplished while he played for the Chargers. Joiner was one of those steady performers who never got much widespread recognition. While quietly setting NFL records, Joiner only made three Pro Bowl teams and one All-Pro. He is in the Hall of Fame, though.

Antonio Gates is the one Charger with more career receiving yards than Alworth. Famously a former college basketball player, Gates was absolutely dominant throughout his career. His 955 receptions are most in team history, as are his 11,841 yards and 116 TD catches. His receptions and yards rank 3rd all-time among tight ends, and his TDs lead the way for his position group. He isn't yet eligible for Hall of Fame consideration, but he should be a surefire first ballot nominee. Plus, he played every game of his career for the Chargers.

Gates wasn't the first great Chargers tight end. Before him, Kellen Winslow was setting TE records. In fact, both great Charger QBs had a tight end who was among the elite at his position to help him out. Though he had a short career, Winslow was probably the best pass-catching tight end of his time. He led the NFL in receptions twice, was a three-time All-Pro, an All-Decade performer, and ultimately a Hall of Famer.

The Chargers selected Junior Seau with the 5th overall pick in the 1990 draft. He didn't make the Pro Bowl that year, but that was okay. Because he wound up representing the team in the next 12 Pro Bowls. Seau was unarguably the heart and soul of the team through the 90s, the decade that includes the franchise's only Super Bowl appearance. His six All-Pro nominations cemented his place as an all-time great and landed him in the Hall of Fame.

Weddle was a do-it-all playmaker during his years in San Diego. He recorded 19 interceptions, scored four defensive touchdowns, and made 851 tackles. He was a two-time All-Pro and was honored with a spot on the All-Decade Team of the 2010s.
I'm not sure there is another team out there with such an imbalance of offensive and defensive players. In fact, I could make a pretty good argument to replace Weddle with a couple of offensive linemen. San Diego/Los Angeles has certainly had more high-powered offenses than stalwart defenses in the team's history. Was there anybody I forgot? Let me know what you think!