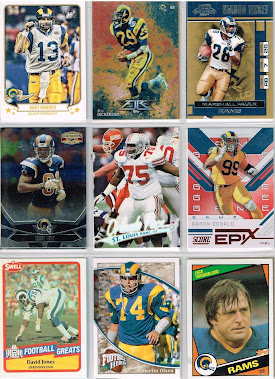 This was a difficult franchise to choose. There have been a lot of great Rams over the years, but interestingly, some Rams Hall of Famers have had shorter stints with the team than other long-time contributors. This left some decisions with a much thinner margin than one might expect. For example, running back Lawrence McCutchen outpaces both Eric Dickerson and Marshall Faulk in career AV. But was he really more impactful in franchise history? What about if you throw in Steven Jackson, who is actually the franchise-leading rusher. Does he knock out another player who is enshrined in Canton? Small decisions like this abounded on this list. Roman Gabriel (who played 11 years for the team) or Kurt Warner (five years)? Tom Mack, Jackie Slater, or Orlando Pace? The result is a very solid lineup with some very solid players on the outside looking in. Here is how my analysis and opinion filled this list.

Back in 1999, the St. Louis Rams were coming off a last-place, 4-12 finish. Sports Illustrated picked them to move up in a weak division--to 3rd place--but still only finish with six wins. Expectations dropped even lower in the preseason when QB Trent Green tore his ACL. Now under center would be former Arena League QB Kurt Warner. The Rams weren't exactly high on Warner; they had left him unprotected in the expansion draft. Apparently, the expansion Browns weren't high on him, either, as they didn't take him. Suddenly, he was the starting quarterback. All he did was act as field general for "The Greatest Show on Turf" and lead the Rams to the only Super Bowl victory in franchise history that very season. He played only 53 games in St. Louis, but he was NFL MVP twice his five-year stint there. He's not in the top five in franchise history in most passing categories (with the exception of passer rating), but he stands out as the best quarterback in team history.

Eric Dickerson set the NFL single-season rushing record while with the Rams in 1984. That record still stands. That's just part of the story; Dickerson was absolutely dominant for the first six years of his career. In that span, he led the NFL in rushing yards per game every season but one. He led the league in rushing as a rookie in 1983, then his record-setting year of 1984, and again in 1986 (and in 1988, but he wasn't a Ram at that point). He's no longer the team's leading rusher because he was traded halfway through year five. But in 4.5 seasons with LA, he was a Pro Bowler and a 1st-Team All-Pro four times and ran for over 7,200 yards. As a member of the NFL's All-Time Team who spent the best of his career with the Rams, how could he not be part of its Franchise 9?

Marshall Faulk was an all-purpose machine. He joined the Rams fresh off his first Pro Bowl season, having led the league in yards from scrimmage with the Colts. He didn't skip a beat. In his first year in St. Louis (1999), he once again led the NFL in yards from scrimmage while winning a Super Bowl and gaining All-Pro recognition for the first time. For the next two years, he led the league in total touchdowns and was an All-Pro both times. He played seven seasons with the Rams, rushing for 6,959 yards (3rd all-time) and scoring a franchise record 85 TDs.

In my mind, Torry Holt is WR1a and Isaac Bruce is WR1b in Ram history. Bruce is the franchise leader in catches, receiving yards, and receiving TDs. Holt is close behind in all categories. So why does Holt get the nod here, over Bruce? Because Bruce had 39 more games in a Rams uniform than Holt. The longevity certainly counts for something, but Holt was just more explosive for a shorter period of time. Holt was a seven-time Pro Bowler, one-time All-Pro, and led the league in receiving yards twice. His 117 receptions led the league in 2003, too. Only once in his seven seasons in St. Louis did he fail to reach 1,000 yards--his 32-year-old year, his last the with Rams and the penultimate of his career. He is a member of the NFL's All-2000s team. Isaac Bruce produced for a long time and just took his rightful spot in Canton, but he didn't spend as much time as one of the league's elite as Holt.

The Rams selected Orlando Pace with the first overall pick in the 1996 draft. Three years later, he solidified himself as one of the game's best. During the team's Super Bowl run in 1999, Pace made his first Pro Bowl and his first All-Pro team. It was the first of seven straight Pro Bowls and the first of three All-Pro nods in that span. For his career, he was honored as a part of the All-2000's team and a spot in the Hall of Fame.

Not too many active players are on these lists. Of those active players, Aaron Donald may be the youngest. Donald just turned 30 earlier this year, but he is already ninth all-time in career AV for the Rams. Among active AV leaders, Donald is the only one in the top 25 with fewer than 10 years under his belt. He has played seven seasons, getting Pro Bowl nods in all seven and 1st-Team All-Pro honors in six. In seven seasons, he has taken home the NFL Defensive Player of the Year award three times. The man is a wrecking crew in the middle. And with a long career still ahead of him, he may very well be the one we talk about as the best defensive player in NFL history when it's all said and done.

David "Deacon" Jones is credited with coining the term "sack" in football. Unfortunately, it didn't become an official statistic until 1982, eight years after Jones's playing career ended, so the original sack-master had no place in the NFL record books. Until 2021. Just four months ago, Pro Football Reference announced the culmination of a painstaking research project in which they credited players with sacks dating back to 1960. Deacon Jones immediately slid into the #3 spot behind Bruce Smith and Reggie White. He was honored as a member of the NFL's 100th Anniversary All-Time Team last year.

This is Merlin Olsen's second appearance on my blog this year. Many of you are familiar with seeing a certain card of his circulate through the blogs a few months ago. Olsen and Jones made up half of the Rams' "Fearsome Foursome." Olsen also benefited from the new sack stats; he was retroactively awarded 91 sacks, good for third in franchise history. As an illustration of just how dominant he was, consider this: Merlin Olsen had a string of 14 straight Pro Bowls and, within that stretch, five consecutive 1st-Team All-Pro nods. He was a member of two All-Decade Teams and is the third Ram on the NFL's All-Time Team.

Any reader who is paying close attention will notice that I said Merlin Olsen is third on the team's all-time sack list. So who is second? Aaron Donald hasn't quite caught him. No, #2 is Jack Youngblood, who traveled through the blogosphere with Olsen early this year. Youngblood is now credited with 151.5 sacks and retroactively became the NFL sack leader in 1974 and 1979. He ranks second in Rams' history in approximate value (behind Olsen) and spent his entire 14-year, Hall of Fame with the franchise. Youngblood most definitely belongs with the team's best nine.
It's hard for me to look at this list of greats and not feel justified in my decisions. But in some ways, the list is odd because team leaders in key categories such as passing yards and touchdowns, rushing yards, receptions and receiving yards, and interceptions are not here. The team has seemed to have short-lived, superstar streaks combined with steady stat accumulation in its past. I can think of a few more very deserving names, but none that I feel should knock any of these players out of their spots. But I'd love to hear your thoughts. Who are your best Rams?