Some of the collections I have been working on over the years are starting to get filled out and my goals are being reached. As a result, I'm starting to slow down a little when it comes to acquiring many cards for some of my mini-collections. Now that the collection is feeling more and more complete, I wanted to start showcasing the cards I have, player by player.

One such collection is my Rookie of the Year collection. I love collecting players who have won the award as the top newcomer in each league. This wasn't born of hot rookie hype and the desire to prospect. Rather, I became fascinated thinking about the careers of guys like Eric Karros, Jerome Walton, and Tim Salmon, who experienced varying degrees of success but may not have become superstars. I thought it would be fun to have a collection that chronicles the individual career journeys of rookie stars--whether they burned bright and flamed out quickly, regressed to the mean, or wended their way to Cooperstown.
My goal has been to fill a binder page for each player who won the award in my lifetime and to fill a row for older players. I may expand that later as I expand my vintage collection. The ultimate goal of my binder is to show a card from every different uniform the player wore, from fresh-faced rookie to grizzled vet. This series is to commemorate each Rookie of the Year's career and show my collection of their cards. I placed all of the past winners into random.org and got my order. The next player up is: 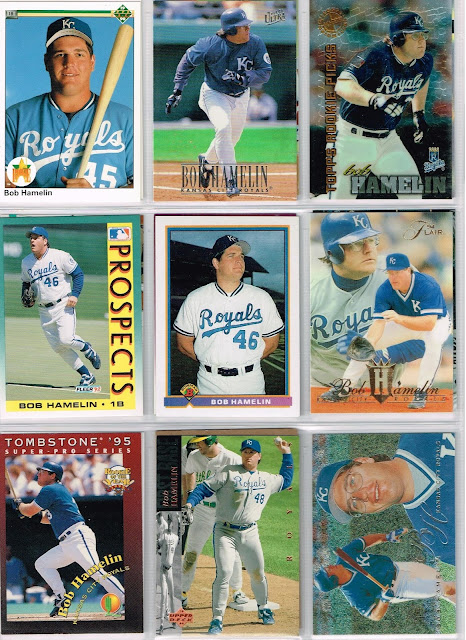 After toiling in the minor leagues for six years, former second-round pick Bob Hamelin got the call to the Majors in 1993. In his first taste of the Bigs, he made 55 plate appearances in 16 games. The results were underwhelming; he slashed .224/.309/.408 with two home runs and 15 strikeouts. In 1994, he was markedly better. He improved his average to .282 and started slugging a few homers. He hit 24 dingers in his first full season, increasing his slugging percentage 191 points and posting a healthy .987 OPS before a strike cut the season short. He won the American League Rookie of the Year easily, taking home 25 of 28 first-place votes. The remaining three first-place votes went to Rusty Greer, who finished third. Sandwiched between them was Cleveland outfielder Manny Ramirez.
Ironically, the 101 games of the strike-shortened season would be the most he would play in a season for the Royals. Over the next two seasons with the club, he would play almost one full slate of games: 161. After a horrendous start to 1995, slashing .168/.278/.313, he was sent back to AAA Omaha. 1996 wasn't much better. After winning ROY, slugger Bob Hamelin would only hit 16 more home runs for KC. He was released during Spring Training in 1997. 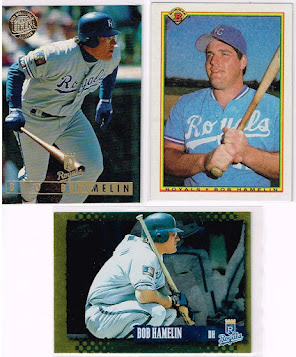 He signed with Detroit a month later and bounced back somewhat with the Tigers. He had his best season post-rookie year in 1997, hitting .270 with 18 homers in 110 games. The next year he signed with the Brewers and slumped again. As Milwaukee's regular DH, he put up a paltry .699 OPS with seven home runs. In 1999, he was back in the minors with the Tigers organization when he decided to hang 'em up.
Hamelin was a bit of a cult hero during his rookie season, probably due to the fact that he didn't look the part of elite athlete. He looks more likely to finish his shift at the plant and knock back a couple of cold ones while watching the game than to hit home runs on the field at said game. In six Major League seasons, he hit .246 with 67 HR and 209 RBI. Baseball-Reference gives him a WAR of 2.5. It's players like Hamelin that make my ROY collection interesting to me. A player that otherwise would have been largely forgotten by history has one shining breakthrough season and gets the spotlight. The subsequent and varying career trajectories are fascinating to me. 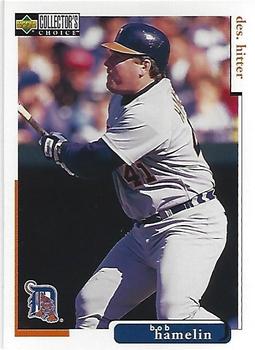 Since I scanned these cards, I've added this Tigers card to my Bob Hamelin page. I still need one to rep the Brewers and complete his career documentation in my collection.
Posted by Trevor P at 3:56 PM