Some of the collections I have been working on over the years are starting to get filled out and my goals are being reached. As a result, I'm starting to slow down a little when it comes to acquiring many cards for some of my mini-collections. Now that the collection is feeling more and more complete, I wanted to start showcasing the cards I have, player by player.

One such collection is my Rookie of the Year collection. I love collecting players who have won the award as the top newcomer in each league. This wasn't born of hot rookie hype and the desire to prospect. Rather, I became fascinated thinking about the careers of guys like Eric Karros, Jerome Walton, and Tim Salmon, who experienced varying degrees of success but may not have become superstars. I thought it would be fun to have a collection that chronicles the individual career journeys of rookie stars--whether they burned bright and flamed out quickly, regressed to the mean, or wended their way to Cooperstown.
My goal has been to fill a binder page for each player who won the award in my lifetime and to fill a row for older players. I may expand that later as I expand my vintage collection. The ultimate goal of my binder is to show a card from every different uniform the player wore, from fresh-faced rookie to grizzled vet. This series is to commemorate each Rookie of the Year's career and show my collection of their cards. I placed all of the past winners into random.org and got my order. The next player up is:

A former 4th-round pick of the Tampa Bay Rays in 2005, Jeremy Hellickson got his first taste of Major League action in 2010. In that first cup of coffee, Hellickson made 4 starts of the 10 games he played, pitching 36.1 innings and finishing with a 4-0 record. The impressive debut meant that he was going to stick around for the 2011 season. He did not disappoint in his first full season. In 2011, he started 29 games, pitching 189 innings. He struck out 117 batters, recorded a 2.95 ERA and a 1.15 WHIP. He took home AL Rookie of the Year honors comfortably, collecting 17 of the 28 first place votes. Second place went to Mark Trumbo, who received 5 first place votes, followed by Eric Hosmer with 4. Evan Nova and Dustin Ackley both received a single vote apiece. 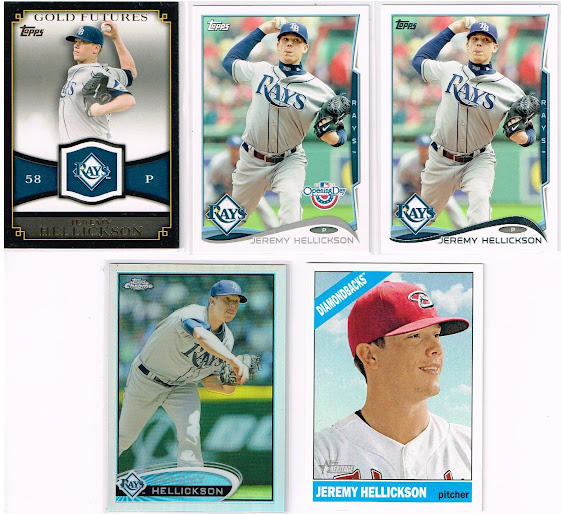 Interestingly, Hellickson's stats simultaneously improved and regressed in the coming years. Moving on from his rookie season, he improved both his strikeout and walk rates, while his ERA and WHIP both climbed. He also won a Gold Glove award in 2012. He spent five years in Tampa Bay before Arizona traded Andrew Velasquez and Justin Williams for his services in the offseason following the 2014 season. He played one season for the D-Backs, starting 27 games before being traded again. One year to the day after joining Arizona, he was shipped again. This time, he was traded to the Phillies for Sam McWilliams. He spent two seasons in Philadelphia, having arguably his best season since his rookie year in 2016. That season he matched his career-high in innings, had a sub-four ERA for the first time since 2012, and recorded his highest strikeout total (154) and K/BB ratio (3.42) in his career. The next season, he regressed and was dealt at the trade deadline to Baltimore for Garrett Cleavinger and Hyun Soo Kim. His time in Baltimore did not go well and at the end of the season, Hellickson was on the move again. This time, he signed a free agent contract with the Washington Nationals. He started 27 games for the Nats in 2018 and 2019, posting a 4.28 ERA and 1.27 WHIP. He has not played since 2019.
In all, he appeared in 232 games, starting 224 of them. He had a career 4.13 ERA and 929 strikeouts. He pitched two complete game shutouts. In 10 seasons, he was a serviceable rotation starter for five teams, won two awards (ROY and Gold Glove), but never was an All-Star or received any Cy Young votes. I have a card representing his time with all five teams.
I hope you are enjoying this series. I plan to keep it going until I've covered all of the MLB Rookie Award Winners.
Posted by Trevor P at 1:52 PM