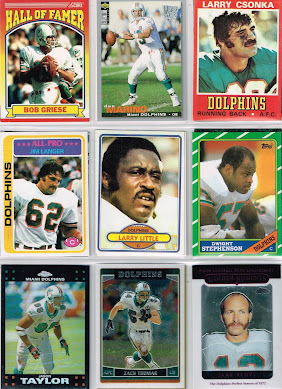 I haven't posted one of these since the Super Bowl, when I shared the top nine players from NFC Champion (and eventual Super Bowl Champ) Tampa Bay. Now that football season is back in full swing, it's time to finish off this series that has been years in the writing. We'll keep it in Florida and travel south to Miami. It feels like it has been a while since the Dolphins have been good. Indeed, the majority of their Franchise 9 comes from the 70s and 80s, when they were consistent title contenders.

Bob Griese quarterbacked Miami to three Super Bowls, winning two of them. That alone should probably land him a spot on the Dolphins' Franchise 9. But let's just throw in eight Pro Bowls, two Super Bowls, an All-Pro season, and a Hall of Fame induction. And he was a lifetime Dolphin, to boot.

Through the 90s--and maybe even halfway into the 2000s--there was a large portion of football fans who would tell you that Dan Marino was the best to ever sling the ball. Perhaps there are still some, though I think the triumvirate of Brees, Manning, and Brady have pushed guys like Marino aside. Unfortunately, it feels like his legacy is that of "best to never earn a ring," but he was so much more. He was an All-Pro three times and MVP once. Five times he led the league in passing yards and three times in TD passes. That includes his jaw-dropping 1984 season, when he became the first QB to throw for 5,000 yards in a season and the first to throw for over 40 TDs. In fact, his single-season TD record of 48 smashed the previous record of 36 and wouldn't be broken for 20 years. His ghost has been hanging over the franchise since he retired.

Forty-two years after Larry Csonka retired, he is still the franchise leader in rushing yards. And, considering that the closest active player trails him by nearly 6,000 yards, he is likely to remain in that spot for years to come still. He played eight seasons in Miami, making the Pro Bowl in five of them and the All-Pro team twice. His 145 yard, two TD performance against Minnesota in Super Bowl in Super Bowl VIII earned him the MVP award for the game. Csonka is a member of the Pro Football Hall of Fame.

The third member of the Dolphins' perfect 1972 season on this list, Langer anchored the offensive line for ten years. He made six consecutive Pro Bowls from 1973-1977 and was a 1st-Team All-Pro in three of those seasons.  For his career, he earned a spot on the 1970s All-Decade Team and in Canton in the Hall of Fame.

Yet another 1972 Dolphin here. Larry Little played 12 seasons for Miami, being named to five 1st-Team All-Pro teams. He is the highest-rated Dolphin lineman in franchise history, going by Pro Football Reference's Approximate Value score. He joins linemate Jim Langer on the 1970s All-Decade Team and the Hall of Fame.

When Langer left, the Dolphins didn't miss a beat at center. Dwight Stephenson was right there to continue the positional dominance in Miami. From 1974 to 1987, the All-Pro team was manned by Miami Dolphins at center seven times. Stephenson played only eight seasons in the NFL, but he was an All-Pro in half of those years. It was enough for him to be named to the NFL All-Decade Team for the 1980s and the Hall of Fame.

Since Marino retired, the Dolphins have fallen on hard times. Jason Taylor has been one of the brightest spots in this era. Taylor was a six-time Pro Bowler, three-time All-Pro, NFL Defensive Player of the Year, All-2000s performer, and Hall of Famer. He leads all Dolphins in sacks . . . by 31. He also leads the team in forced fumbles (by 21) and defensive touchdowns (by 4). He ranks second behind only Dan Marino in franchise AV.

Taylor's defensive teammate, Zach Thomas, was also a wrecking crew. His 1,107 tackles not only top the franchise's all-time list, but also rank 5th all-time in the NFL. Seven Pro Bowls and five All-Pro teams earned him a spot on the All-Decade Team of the 2000s, but he is still waiting to get the call to Canton. He is undoubtedly one of the top nine Dolphins, though.

The perfect 1972 season was capped off with a victory in the Super Bowl over the Washington Redskins. Leading the team in that game was Super Bowl MVP Jake Scott. His 35 career interceptions still rank #1 in Dolphins history. He had a fairly short career in Miami, but he made the most of it. He is the team's all-time leader in AV/game, which indicates to me that his presence was felt every time he took the field. In just six seasons, Scott made five Pro Bowls and two All-Pro teams.
Like many teams, there were some obvious, must-include choices and some that required some internal debate and data analysis. The Dolphins had some incredible, nickname-worthy defenses that feel underrepresented here. Unfortunately, their "No-Name Defense" didn't even lift a single player out of anonymity on this list. Dick Anderson, Nick Buoniconti, and Bob Baumhower were all considered on that side of the ball. One constant that I found in the Dolphins' most successful eras was an outstanding offensive line. I could name Richmond Webb and Bob Kuchenberg as offensive linemen on this team and feel good about it. And what about Marino's favorite Marks Brothers (Mark Duper and Mark Clayton)? I didn't find room for them over these players. The most recent Dolphin to be considered was Cameron Wake, but he just didn't have quite enough of a career impact to crack this lineup. It may be many more years before anybody else does, judging by the current roster and longevity each player currently has with the team. Let the debates begin in the comments!