Earlier this month, I had some eBay bucks to use. My unofficial collecting focus this year seems to be knocking out older sets on my wantlist, so my attention drifted that way. Part of cleaning up those old sets has been to make sure that I have a complete set from every year that I have actively collected. Spending my quarantine time one day going over and enjoying cards in my collection, I realized that I had two 1994 sets in my collection, but one was a small 100-card base set of Classic NFL Experience and the other was a small food-issue Coca-Cola set. Neither had any rookies. Now, part of my reason for wanting to complete a yearly set is to see the rookie crop each year brings to the league. So I decided on a 1994 set that I have always liked. It's simple, it's clean, and it's cheap. Collector's Choice was my choice, and I went ahead and bought a completed set off eBay.

The front of this set is great. Clean white border. Interesting photographs. Simple design for the name and team. Product logo is clear but not overstated. And I'm a sucker for the position illustrations in the bottom corner.

See? Interesting photographs, including shots of activities that may not be within the rules of the game. Yes, Neil, that is holding right there.

Here are some shots that I like that don't show game action. 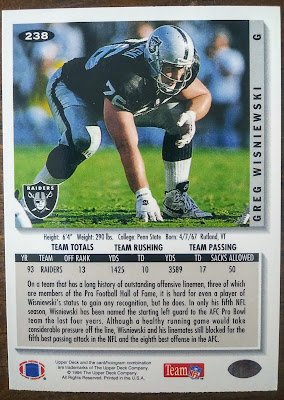 Although, the Greg, er, Steve Wisniewski has a major problem on the back.

Wisniewski wasn't the only glaring mistake. You may be looking at these checklists thinking that I have them out of order. 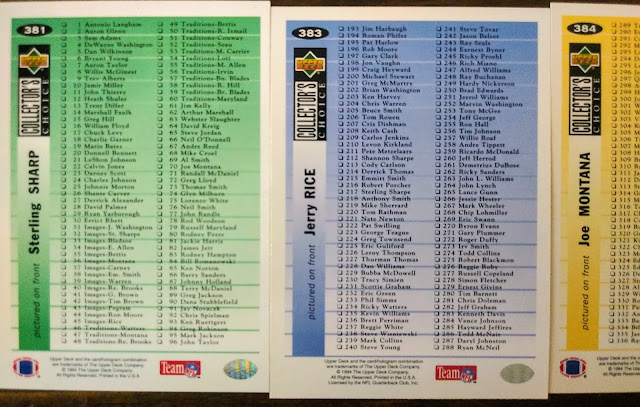 But not so! The numbers shown on the front of the checklists don't match the numbers actually represented on the back. Plus the egregious misspelling of Sterling "Sharp."

But I won't let a few mistakes get me down. How could I when the back is nearly perfect? Another great pic, full stats, and a write-up when there is room. Even when there were a lot of stats, they didn't skimp. They found a way to give us everything and keep the pic, too. Phil Simms's sunset card is a good example of a masterful card back design. If I'm going to nitpick, the only thing I would change about the back is a "How Acquired" portion to the vitals line. 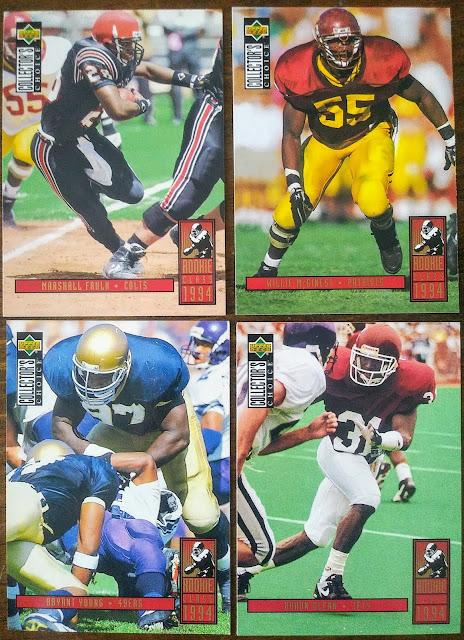 Remember those rookies that I needed? It was a pretty decent draft class. Shown here are Marshall Faulk, Willie McGinest, Bryant Young, and Aaron Glenn, in case you can't read the lines. I like that the rookies are clearly distinguished. The back of the rookie cards shows the draft selection they were in big, bold letters. I like that a lot.

There are two subsets included. This one is "Images of 93." It's a 15-card subset that highlights remarkable individual achievements, such as Sterling Sharpe's four-touchdown game, Jerome Bettis's 212-yard performance, or John Carney's record-breaking 29th straight successful field goal attempt.

Can you tell me what these three players have in common?

Or how about these three? If you noticed that they all attended Notre Dame, USC, or the U. of Miami, respectively, you got it. The second subset is called "Traditions of Excellence," and it features 15 players who played for those college programs. Why? I don't know. Does anybody know the story behind that? I didn't know that's what this subset was until I started reading the card backs and I was like, "Why are these cards all about Notre Dame?"

This set is nearly ideal for me. I love the simple design. Even though it is photo-centric, there is still plenty of good information given--through both text and numbers. The size is perfect to me; 384 cards allows the company to include more than just the offensive superstars without being too cumbersome for me to collect/store. I like having the highlights of 1993 in a subset. If I were in charge, I probably would have expanded the rookie cards to 45 and dropped the "Traditions" subset, which only is of interest to fans of three select college programs. Other than that, this set's design and size are just what I prefer.
Posted by Trevor P at 9:00 AM