Cards In the Wild!

The last time I posted about football was back in October, to do a State of the Set post for my 1997 UD Legends build. Before that, it was right at the beginning of the football season to show off my fantasy football roster. Do you want to know how the season turned out? Well, in the first round of the playoffs I scored 151 points. The closest person to me scored 125 and my opponent was 54 points off of my score. That may sound pretty good--but only until you realize that the 54 points was in the other direction. Yes, I scored the second-most points in the league and still lost by more than 50 in the first round of the playoffs. That left me battling for 3rd place. In that final round, I scored even better: 161 points. That was second-most in the league again. Once again, it was my opponent who scored the most, with 163 points. I had Josh Allen as my QB on Monday Night. He threw a TD to pull me within 2 points with 13 minutes to go in the game. And that was the last time he saw the field. The Bills pulled him at that point, leaving me just shy of 3rd place. The guy who scored 205 on me in the first round? Well, he played for the championship, scored 98 points in that game, and won. So despite my scoring the most points combined in the playoffs, I lost both of my matchups and ended up in 4th place. It was like that in our league this year. Our top two total point scorers for the season, cumulatively, both missed the playoffs as they always seemed to run into their opponents' best weeks.
And now the Super Bowl is nigh, and I haven't even posted any new football cards. The reason for that is simple: I haven't seen any 2020 football cards on the shelf. At all. None. Nada. Until now. On Monday night, I made a run to Walmart for a few items and saw cards for sale. There was only one product, but I made sure I picked up a blaster.
The box promised one auto or relic, which came out in the first pack. Let's just say I'm happy with the pull and show these packs in reverse order of opening them to save the hit for last.
Pack 5 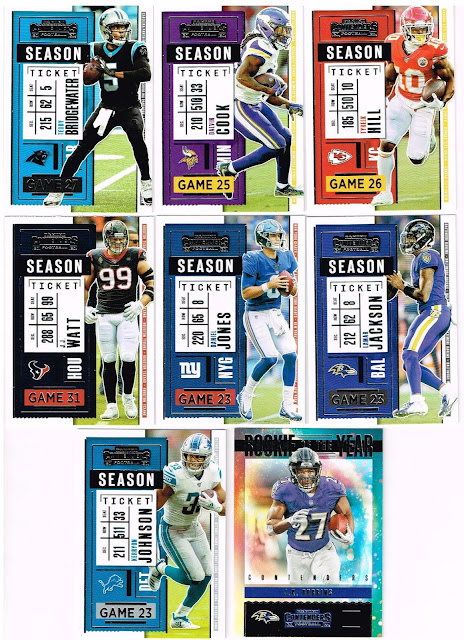 2020 Contenders was the product. This was my first time buying contenders for a few years. Because of the limited size of the base set, each pack is pretty much star-studded. Watt and Lamar are keepers from this pack. I pulled one insert per pack. This one was a JK Dobbins Rookie of the Year candidate.
Pack 4 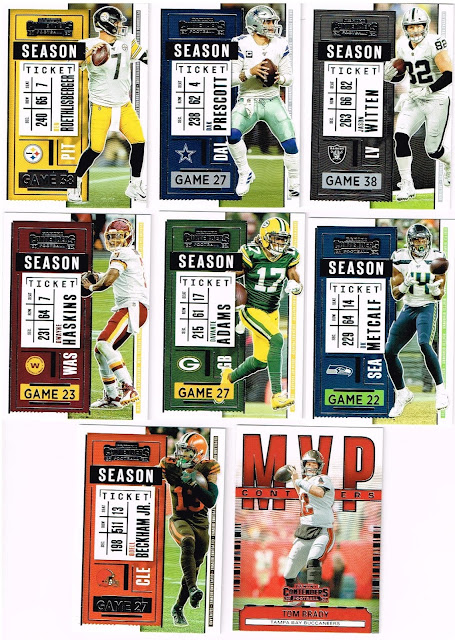 My first Packer from a 2020 product is a guy who had a monster season and led my fantasy team, Davante Adams. That's a keeper, along with my first Buccaneer Brady, which was my insert for the pack.
Pack 3 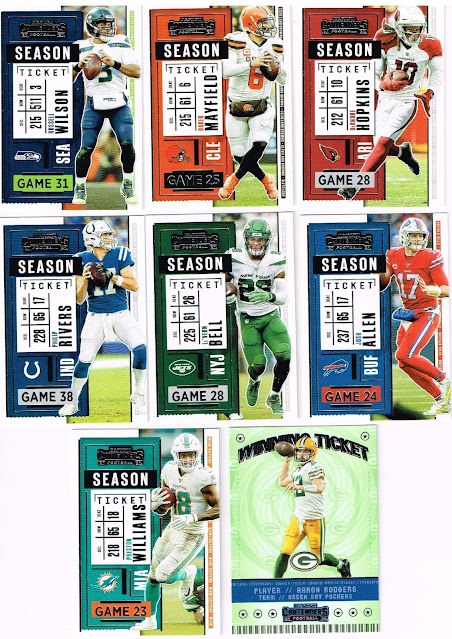 Another Packer, likely 3-time MVP, Aaron Rodgers. I keep thinking that it would have been cooler to have pulled Rodgers in the MVP Contenders set (instead of Brady) because it will probably have come in an MVP season for him, and Brady in the Winning Ticket set because, well, Brady just wins. Except I hope not this Sunday. Rodgers and Mayfield are the two keepers in this pack.
Pack 2 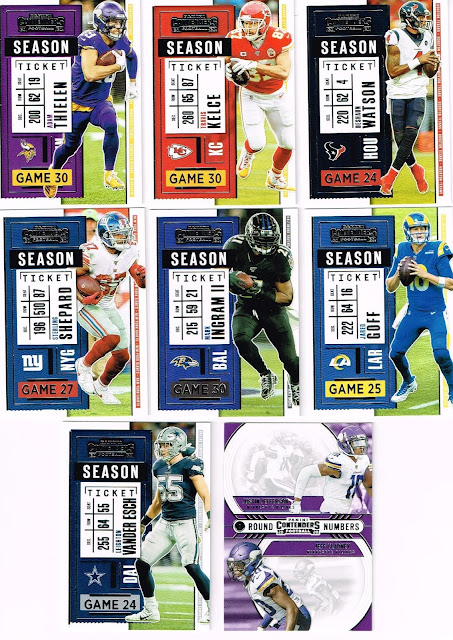 Too many Vikings in this box. Dalvin Cook came in the first pack I showed, and now there's Adam Thielen and the insert of Justin Jefferson and Jeff Gladney. I may decide to keep the Kelce, but all the rest are up for trade, I think.
Pack 1 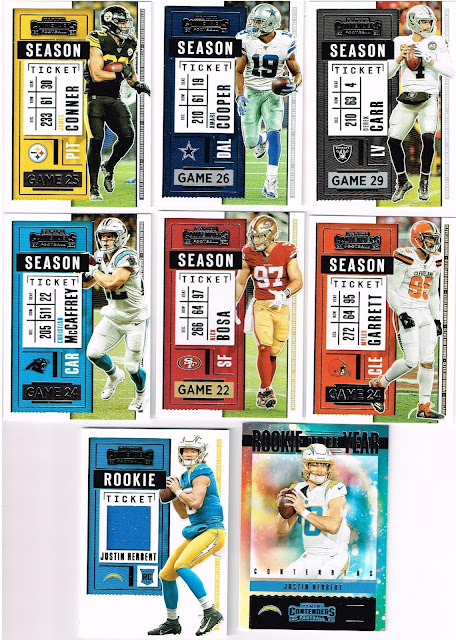 Here was the first pack. Frankly, after this pack, I was happy with whatever else came from the box. The Rodgers was a nice finishing touch, but how about starting the blaster off with a hot pack of top rookie Justin Herbert? I'm keeping both the relic Rookie of the Year Contenders insert. Herbert was impressive this season and I'm glad to see so much of him in my first 2020 football card purchase.
I noted the cards I plan to add to my collection; all the others are available for trade. Let me know if there is something that catches your eye and you would like to trade for.
Posted by Trevor P at 2:36 PM