I've been spending my week posting my collection of cards featuring players traded by the Cubs before this year's deadline. I have one more to show. Over the past four or five seasons, Javy Baez has become my favorite player currently playing. Whether it is his dazzling glovework,

El Mago always puts on a show. He's just out there having fun and it's easy to have fun along with him. (Unless you're a Pirates fan watching a rookie first baseman get hoodwinked into a head-scratching rundown. That probably wasn't a lot of fun.) Of the players who were traded, I honestly thought Baez had the best chance to stick around, but it wasn't to be. So, as a farewell, here is my Javier Baez collection. 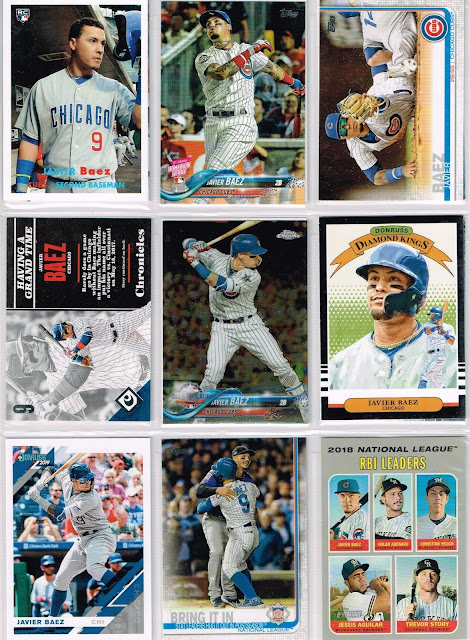 2019 Topps has quintessential Javy after an apparent diving tag. 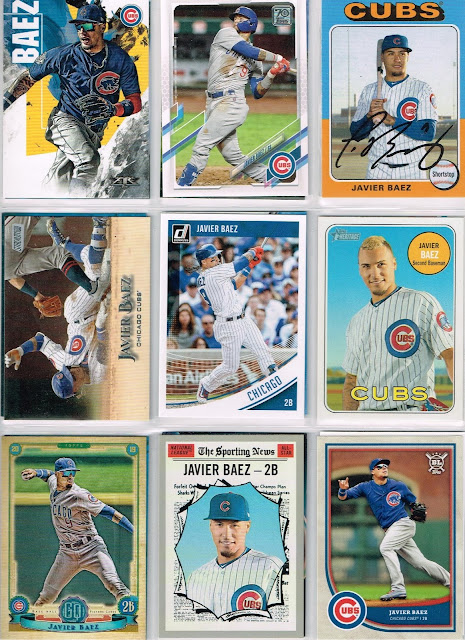 Stadium Club is nice, but I think my favorite here is the GQ. 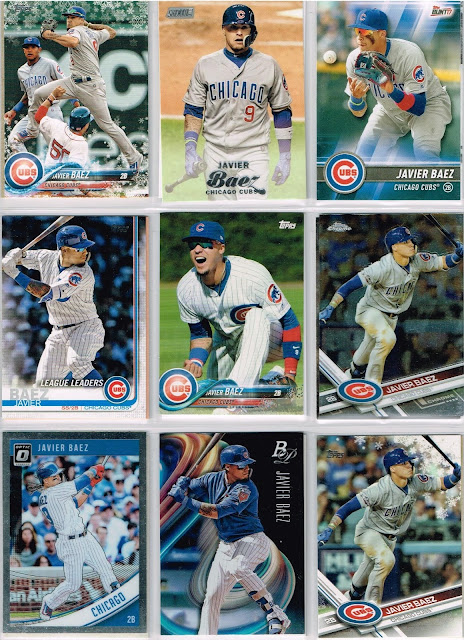 I just noticed the corners of this page are both Holiday edition. I like the 2018 photo, turning two over Mookie Betts. 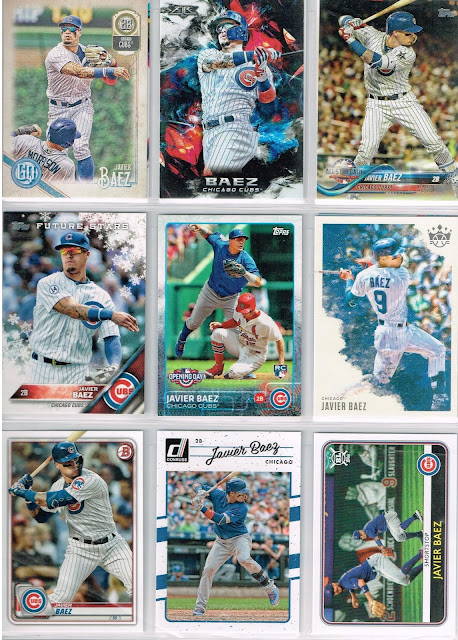 Big League is fun here, mimicking the throw behind Bryant. 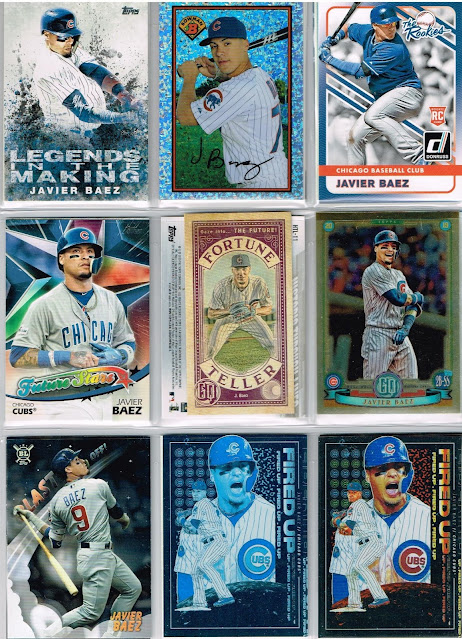 Now we're getting into the non-base cards, which make up a good portion of my collection. I like the chromed GQ box topper here. 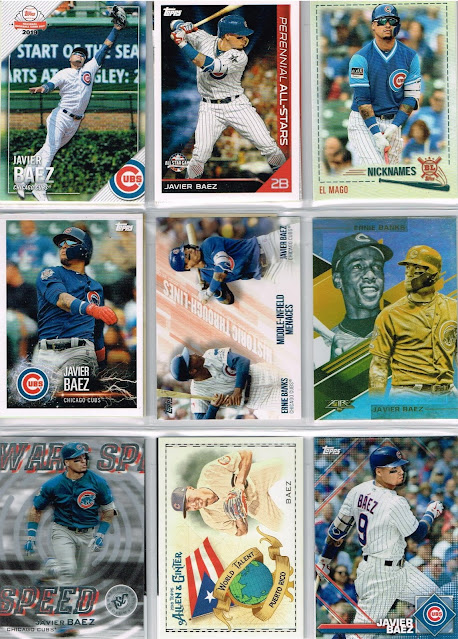 Great page with a couple of Ernie Banks cameos. My favorites are National Baseball Card Day and the "El Mago" nickname. 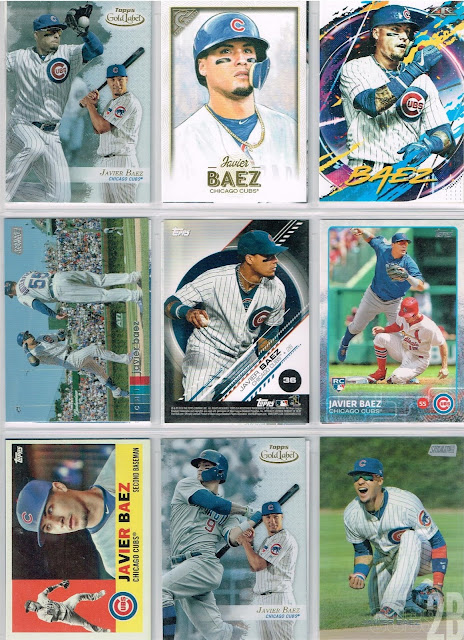 A pair of Gold Labels are the highlight to me on this page. 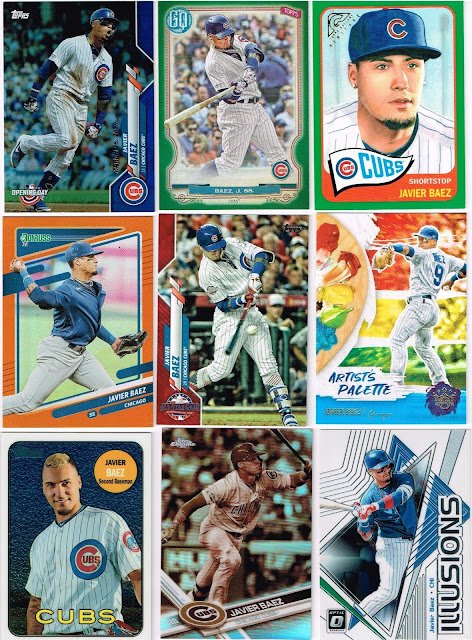 I like the red parallel of last year's Update. 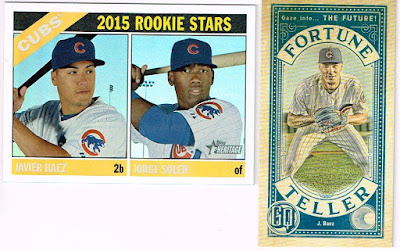 The Heritage you see is a Chromified Refractor version of Javy's shared rookie card with Jorge Soler. I like the GQ mini, which is serial-numbered to 250. 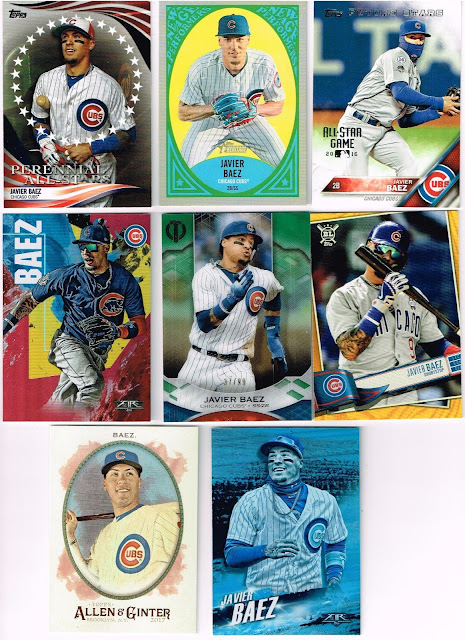 The last page is highlighted by a serial-numbered Topps Tribute parallel.

Even though he is no longer in the Windy City, I'll still be watching Javier Baez play baseball. Until some new Cub shows he can be as exciting as El Mago, he'll be hard to displace as my favorite player in the game. The fireworks have already started in New York, as Baez homered in his first game as a Met. Anthony Rizzo and Kris Bryant did it, too, by the way--for the Yankees and Giants, respectively. Because that just fits the current situation as a Cubs fan perfectly.