I'm a pretty good fantasy football player.  I play multiple teams each season and I have only ever had one squad not reach my league's playoffs.  The thing is, I will never brag or trash talk about fantasy football.  I realize that my success is the result of two major factors, neither of which is worthy of great pride on my part.  First of all, most of those leagues have been Yahoo public leagues.  If any of you has ever played in a Yahoo public league, then you understand that the key to winning those leagues is just to keep playing until the end of the season.  Almost everyone else will drop out and start players who have been on IR since Week 3.  The other factor is the fact that I follow football more than any other person I know.  I'm not just a casual fan.  That's not really something to brag about, either, but it has definitely led to some fantasy football success over the years.

Last year, I got sick of just playing competition who wouldn't even bother to show up in a public league, so I got some colleagues at work together for a friendly league and became a commissioner for the first time.  My hope was that with a more personal league, everyone would keep playing.  It worked, and I had the most enjoyable time I've ever had playing fantasy.  I didn't win (I got smoked in the championship game), but it was definitely fun.  This year, I got the league back together again.  I realized that I followed football a little too much during our draft this year, when we gathered together and I knew about almost every player on the board, while the guys around me were just picking names they might have heard of.  Again, that's nothing to warrant any trash talk, so I didn't poke any fun at the bad picks I saw.  At least they play.

Despite the fact that I was well-prepared for the draft, I found that it went much different from the mock drafts I had done.  After about 10 mocks, there were a few players that I just knew I would come away with, because it happened that way every time.  Not so in the actual draft.  I'm a little wary about my team this year because I feel that a lot of players are unproven.  Here is my team, the 2018 Myopic Chihuahuas. 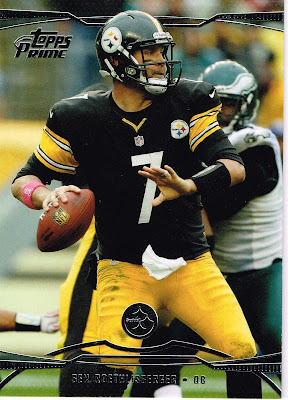 QB-Ben Roethlisberger, Steelers
I thought for sure this would be Matthew Stafford after all the mocks, but it didn't turn out that way.  Ben was a solid late-round pickup, I think.  He still played well last year, so I'm hoping for a solid performance this year. 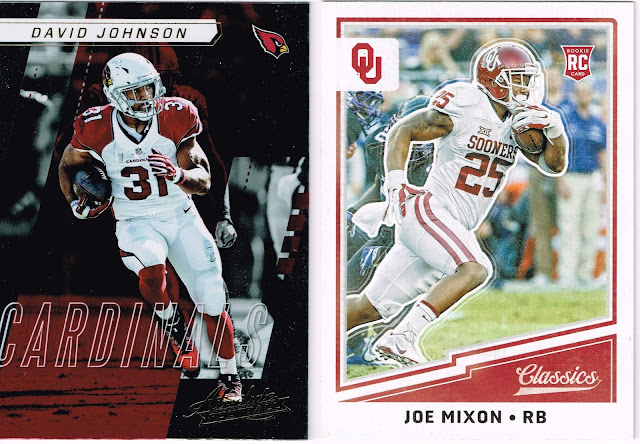 RB-David Johnson, Cardinals
RB-Joe Mixon, Bengals
Johnson was my first pick, #5 overall.  He was hurt all last season, but it wasn't a leg injury.  I'm banking on his being fresh and ready this year.  Mixon is a gamble for me.  I'm a little wary, but a lot people believe he will break out this year.  I sure hope so.

WR-A.J. Green, Bengals
WR-Demaryius Thomas, Broncos
WR-Sammy Watkins, Chiefs
Green was my 2nd rounder.  I've never owned him in fantasy before, so I'm not sure what to expect.  He's usually a great performer.  Thomas should be pretty good this year, with a better QB situation than he has had the past couple of years.  I can only hope rookie Courtland Sutton doesn't steal too many targets.  Watkins was a reach when I picked him up, but I didn't trust any other wideout behind him on the board to be a WR3, so I had to snatch him up earlier than I should have.  He has insane talent, so I'm hoping Patrick Mahomes can be the QB to finally get him the ball. 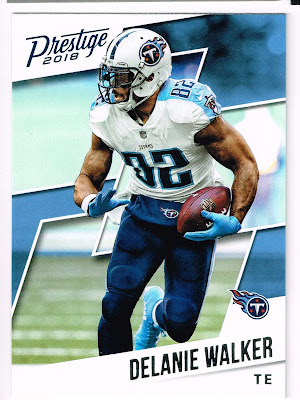 TE-Delanie Walker, Titans
It seems like Walker is available in the middle rounds each year, and each year I pass.  Then he plays as a top TE and I wish I had him.  He slipped a little this year, and I didn't let him get by me again. 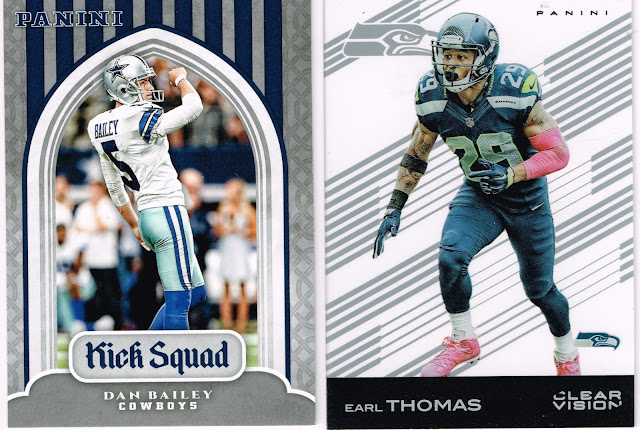 K-Dan Bailey, Cowboys
DEF-Seattle Seahawks
Bailey was just cut by the Cowboys, but that doesn't bother me too much.  It was my final pick anyway, and I just replaced him with another kicker (Daniel Carlson of the Vikings).  At least I actually have a card to show of Bailey.  Kicker cards are rare these days.  Seattle's Legion of Boom is history, but I wasn't going to reach for a defense earlier in the draft.  I'll start with Earl Thomas and the boys, and stream week to week.

I'm pretty good at running back, thin at wide receiver, and have the potential for some good quarterback play.  I have some questions about the team this year, but I'm excited for the season to begin!
Posted by Trevor P at 7:28 PM