"America's Team" had no shortage of great players to choose from.  A run of NFC dominance in the the 70s and 90s means that there are plenty of helmets in Canton with stars on them.  But since we're limited to a 9-pocket page for this exercise, we'll have to narrow down the field a little.  Who are the Cowboys' best nine players?  Let's find out! 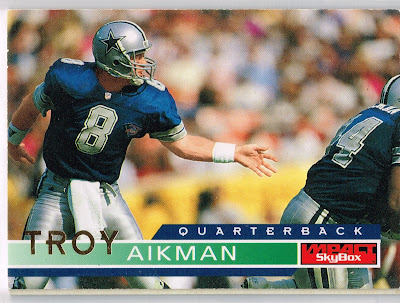 1. Troy Aikman, QB (1995 Skybox Impact)
Aikman made it to the Hall of Fame, without being one of most celebrated QBs of his era.  Despite being overshadowed by Montana, Favre, Young, Marino, or Elway, Aikman put together a career that left him atop the Cowboys' record books in passing yards and touchdowns.  He strung together 6 six straight Pro Bowl appearances and took home three Lombardi trophies.  Aikman's best trait may have been his ball protection.  His interception rate of 1.6% led the league in 1995.  As the #1 overall pick in the draft, Aikman spent his entire career with the team that picked up, making him a candidate for best #1 overall pick ever, and a sure-fire all-time Cowboy. 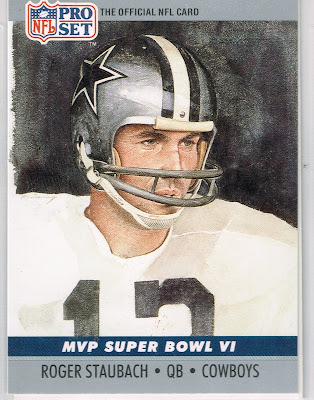 2. Roger Staubach, QB (1990 Pro Set Super Bowl MVPs)
Another Cowboy great who spent his entire career with Dallas.  Like Aikman, Staubach made 6 Pro Bowls without ever being named an All-Pro.  And he won Super Bowls.  When Roger the Dodger retired, he was on top of the Cowboys' all-time record list in passing yardage, touchdowns, and passer rating. 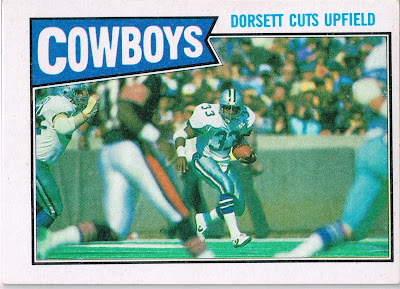 3. Tony Dorsett, RB (1987 Topps)
Heisman winners don't always pan out in the NFL.  Tony Dorsett did, and joined Roger Staubach as two Heisman winners already on the Cowboys' team.  His college success didn't play into this selection, though--he earned this through his play as a pro.  An explosive runner, Dorsett had eight 1,000 yard seasons for Dallas, and was on pace for another in the strike-shortened 1982.  That same season, he set a literally unbreakable record with a 99-yard TD run.  In 11 seasons with the Cowboys, he put up over 12,000 yards and 77 touchdowns.

4. Emmitt Smith, RB (1991 Pro Set Platinum Game Breakers)
For a decade, the question among football fans was "Emmitt or Barry?"  Emmitt eventually ran his way to the top of the NFL's all-time rushing list, and 94% of that yardage total came with the Cowboys.  He also tacked on 164 total TDs.  Emmitt is simply an all-time great and impossible to leave off of this list.

5. Michael Irvin, WR (1996 Skybox Premium)
The third of the famed Triplets of the 1990s Cowboys to make the Hall of Fame and this list, Irvin was Troy Aikman's go-to target during the team's dominance of that decade.  Irvin spent his entire 12-year Hall of Fame career with the Cowboys, which in and of itself deserves consideration for this team.  But if we need more proof, he caught 960 passes and 65 TDs for the 'Boys.  He's most definitely deserving to be here.

6. Larry Allen, G (1996 Collector's Edge President's Reserve)
Larry Allen was drafted in 1994.  Midway through that season, he became a full-time starter.  The next year, he was named his first Pro Bowl.  That was just the beginning, as he would make 11 of the next 12 Pro Bowls.   From 1995-2000, Allen was 1st-Team All-Pro for six years running.  He was absolutely dominant.  For those who watch line play, he was a sight to behold.  He was incredibly nimble, despite weighing in at 325 pounds.  Allen was already named to the NFL's All-Decade team for the 1990s and entered Canton in 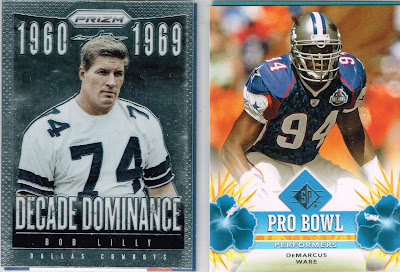 7. Bob Lilly, DT (2013 Panini Prizm Decade Dominance)
I waffled back and forth on Bob Lilly, certainly not because I doubted his achievements, but mostly because he played a good portion of his career before the Super Bowl Era.  But if we were to count only 1966 forward, Lilly still ends up with five 1st-Team All-Pros and seven Pro Bowls.  In that time, he has a Pro Football Reference approximate value rating of 101.  As a member of the original team, he was also the first Cowboy in the Hall of Fame.  Only the time frame of his career is a knock against him, but I feel that he did enough after the inception of the Super Bowl to qualify.

8. DeMarcus Ware, LB (2008 SP Authentic Pro Bowl Performers)
Ware is the only non Hall of Fame player on this list, but that's only because he's not yet eligible.  Canton will come calling someday.  In nine seasons with the 'Boys, Ware racked up 117 sacks--good for the Cowboys' career record--and was named to the All 2000's team.  Though he ended his career in Denver, the majority of Ware's Pro Bowl berths and all four of his All Pro nominations came with a star on his helmet. 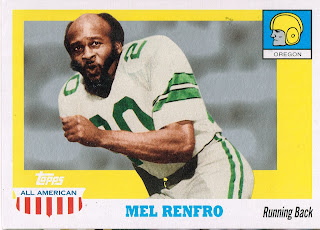 9. Mel Renfro, CB (2005 Topps All American)
The Cowboys' all-time leader in interceptions with 52, Renfro made 10 consecutive Pro Bowls in the Sixties and Seventies.  I was somewhat surprised to learn that Renfro's career weighted AV rating on Pro Football Reference places in the top 20 of all defensive backs.  Renfro doesn't get talked about much today, but he was one of the original shutdown corners in NFL.

I'm no Cowboys fan, but there is no denying that this will be one of the strongest teams I've put together.  I also expect to see a lot of comments on this one, because there are a ton of players who might have deserved consideration.  While the 49ers had some of the biggest names in NFL history carrying the supporting cast, the Cowboys seem to have been loaded with many HOF caliber stars.  Let the discussion begin!