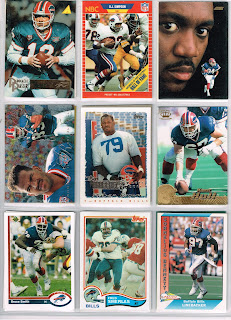 The Buffalo Bills have only had one really successful era since the AFL/NFL merger.  They have only made the playoffs 15 times in the 52 Super Bowl years, and 10 of those appearances came in a 12-year stretch between 1988 and 1999.  That stretch includes four consecutive Super Bowl appearances--and losses--making the Bills synonymous with heartbreak.  Not surprisingly, their Franchise 9 reflects the days of AFC dominance of 25-30 years past.

1. Jim Kelly, QB (1995 Pinnacle QB Club)
If a team has a HOF quarterback, he will most likely make the cut as one of the franchise's top 9 players.  Kelly was the field general during that early 90s string of Super Bowl runs.  He ran that no-huddle offense to perfection.  Since Kelly retired in 1996, only one QB has managed to start for more than two seasons.  That man was Ryan Fitzpatrick.  It's easy to imagine the Bills having had no success in their history without Kelly.

2. O.J. Simpson, RB (1989 Pro Set Announcers)
It's true that O.J. has very few (if any) fans remaining.  But that doesn't change the fact that he was once the most dominant runner in football.  In 1973 he became the first rusher to surpass 2,000 yards in NFL history, doing so in only 14 games.  His 143 yards per game is still an NFL mark and would have translated to 2,289 yards in today's 16-game season--a mark that would still stand.  While not a good human being, O.J. was a great football player.

3. Thurman Thomas, RB (1991 Score)
To me, Thurman Thomas was the original Marshall Faulk.  He was not only one of the best runners in the league, he was also one of the greatest threats out of the backfield.  In his 12 seasons with Buffalo, he averaged 1,377 total yards.  At one point, he led the league in all-purpose yards 3 out of 4 seasons and winning the NFL MVP in 1991.  As his running ability declined, he began catching more and more passes out of the backfield, remaining the team's primary threat for over a decade. 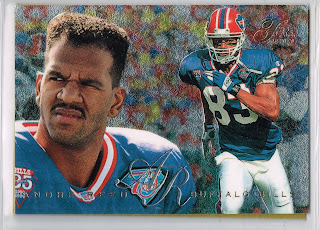 4. Andre Reed, WR (1995 Flair)
If Thomas was the team's #1 weapon, Reed was #1b.  He caught 941 passes for over 13,000 yards and 86 touchdowns over 15 years with the Bills.  Reed and Rice were often mentioned in the same breath when talking about YAC (yards after catch), as he was always dangerous with the ball in his hands.  Somehow, Reed was passed over for the Hall of Fame until 2014, when he made it in his 10th year of eligibility, despite the fact that he retired with the 3rd most receptions in NFL history. 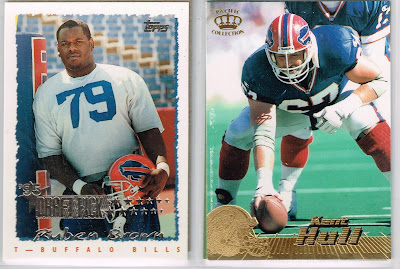 5. Ruben Brown, T (1995 Topps RC)
Ruben Browns was selected in the first round of the 1995 draft and immediately took over as the Bills' starter at left guard.  He started every game of his rookie year and continued to start every game for the next nine years, barring a few games missed due to injury.  His rookie year was the only year he failed to make the Pro Bowl while playing for the Bills.  The Bills of the late 90s may not have been good, but Brown sure was.

6. Kent Hull, C (1996 Pacific)
One secret to the Bills' success from 1990-1993 was the offensive line.  There were some great players on that line, but none better than Hull.  I think it's no coincidence that Thurman Thomas's run of all-purpose yard dominance, including his 1991 MVP year, happens to overlap almost perfectly with Kent Hull's streak of Pro Bowl and 1st-team All-Pro honors.  Plus, I have a soft spot for centers and will always be happy with cards of centers with their hands on the ball.

7. Bruce Smith, DE (1991 Upper Deck)
He's only the NFL's all-time leader in sacks.  His record of 200 sacks isn't going anywhere soon.  Julius Peppers is closest active player, but he's 45 sacks behind with only a season or two left in him.  Next closest?  Dwight Freeney, with 125.  Smith was absolutely dominant and probably the best player on the Super Bowl teams.

8. Fred Smerlas, DT (1982 Topps)
It's hard to gauge a nose tackle's value, especially during a time when nose tackles were simply meant to anchor the line and sacks weren't an official stat and tackles weren't tracked during part of his career anyway.  But Pro Football Reference gives Smerlas an Approximate Value stat of 101 for his Buffalo career.  That's good for 7th all-time for the Bills.  It probably has a lot to do with his 5 Pro Bowls in 11 seasons.

9. Cornelius Bennett, LB (1991 Pacific)
Rounding out the Bills' Franchise 9 is Cornelius Bennett, who also made the NFL's All-Decade team for the 1990s.  He was the 2nd overall draft pick in 1987 and made 1st-Team All-Pro in 1988.  That year also marked the beginning of a Pro Bowl streak that lasted until 1993, minus a 1989 season that was cut short by injuries.  Bennett was an all-around backer, who piled up 52.5 sacks, 751 tackles, 6 interceptions, and 19(!) fumble recoveries for the Bills.

This list once again shows the struggles of a team in recent years.  The last active Bill on this list was Ruben Brown, who left for Chicago in 2003.  Since then, the roster has been a revolving door of mediocrity.  But let the discussion begin!  Who would you choose?
Posted by Trevor P at 8:42 AM