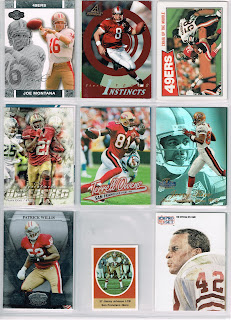 One feature I want to make for this blog is to feature the best nine players for each franchise.  Why nine?  Because then I get to create a binder with a page for each team, of course!  To make my task a little easier, I've decided to narrow the field to Super Bowl Era players only.  First of all, it eased the selection process because I wanted to keep each team to nine players.  Trying to take a team like the Bears or Packers with all its history and whittle the greatest players to nine is a daunting task.  For some of these teams, it was hard enough to make the cuts that I did.  To double the length of the history and decide between Norm Van Brocklin and Torry Holt was beyond the scope of what I wanted for this project.  Sorry Norm, it's just easier to justify excluding you because of your time period.  Second, it makes it a bit easier to collect the cards I need without having to bust my budget on a lot of vintage.  Third, since half the teams in the NFL don't have history too far beyond the advent of the Super Bowl, it levels the field a little for the newer teams.
As is always the case with any type of ranking, there will be plenty of room for debate.  This is in no way a definitive list.  I have a soft spot in my heart for the guys in the trenches, so some may say that I have included too many offensive linemen.  Interestingly, I have found that most teams have a 5/4 split between offense and defense, or vice-versa.  I didn't intentionally try to even it out, that's just how it turned out.  This is just my opinion, and I tried to base it on both stats and status.  I've learned a little bit of football history in the process as well, and having a bit of history is one of the appeals of collecting to me.  In any case, it gave me another something to do with my cards, and that's why I did it in the first place.
The teams will be presented in no particular order; basically, I have chosen the players already and am in the process of filling in the gaps as I do not currently own a card of every player I have chosen.  I'll present each team as I complete its page.  Players are in order of position, not ranking.  I don't really care to take my nine franchise players and try to rank their greatness.  I'll just leave it as a team.

Today I'm featuring the San Francisco 49ers.  Quick, name your top 9 Niners!  Chances are, you could probably think of about six no-brainers immediately.  A long run of dominance, some all-time great QBs, and a couple of players in the conversation for GOAT status makes a good portion of this team easy to build.  The last few spots might be more debatable or even filled by lesser-known players.  I had Jimmy Garroppolo on this team, but then he actually lost a game this weekend.  Now that he's not undefeated as a starter anymore, I bumped him from the team.  Here is the current best players from 49er history.   In case anybody is wondering about my judgment, I'm totally kidding about Jimmy G. 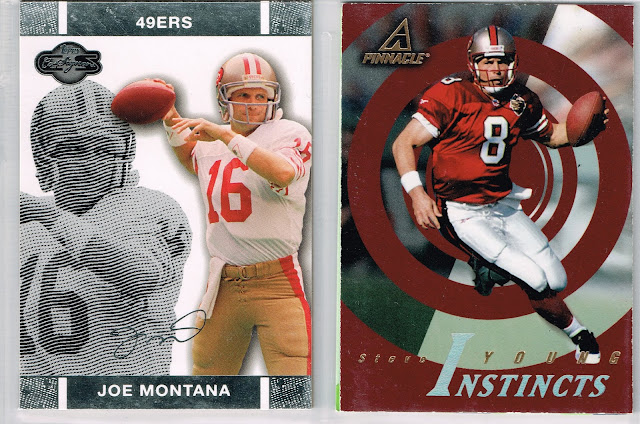 1. Joe Montana, QB (2007 Topps Co-Signers)
Typically, the conversation of QB GOAT involves Tom Brady and Joe Montana.  Both have an uncanny ability to win, and that defines both of them as quarterbacks far more than the numbers.  Montana took home  4 Lombardi Trophies in 4 tries over an 8-year span.  But if you want numbers, here are just three to justify his spot as a Top 9 player for the franchise: he still holds the team's marks in passing yards and touchdowns, while he is second in quarterback rating.

2. Steve Young, QB (1997 Pinnacle)
The only QB in San Francisco history with a higher rating than Montana?  That would be Steve Young, who is 6th all-time in the NFL.  At the time he retired, he was #1.  And I mentioned that Montana did nothing but win above, but Steve Young actually has the highest winning percentage in 49er history, at .734 versus Montana's .719.  He may only have one ring as a starting QB, but he certainly filled Montana's shoes admirably.  Only the Packers, with the transition from Favre to Rodgers have been as fortunate as the Niners as far as quarterback succession goes, but I still think that the Niners have the best 1-2 punch in history. 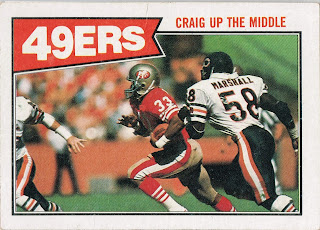 3. Roger Craig, RB (1987 Topps)
Roger Craig was the original PPR weapon out of the backfield.  In eight seasons by the bay, Craig had 508 catches for 4,442 yards.  In one of those seasons, he actually led the entire NFL with 92 catches. Yes, in the era before the pass-happy NFL, a running back caught 92 balls to lead the league.  He followed that up with 81 catches the next season.  But he wasn't just a receiving threat scatback type of player.  He topped 1,000 yards rushing three times.  In 1988 he was 1st-Team All-Pro after a season in which he rushed for over 1,500 yards and added another 500 on 76 grabs.

4. Frank Gore, RB (2014 Topps Greatness Unleashed)
Believe it or not, but Frank Gore has more rushing yards than any other active player.  At 14,087, he is about 2,000 yards ahead of even Adrian Peterson.  The bulk of those yards (over 11,000) came while he played for San Francisco.  His yardage in San Francisco alone puts him in the top 20 all-time.  While he is somehow still churning years after it seems like he was forgotten, the time he put in for the 49ers was already enough to be one their top players ever.

5. Terrell Owens, WR (1997 Ultra)
TO finally got to fulfill his dream of making it to Canton.  Sort of.  I guess he didn't actually GO to Canton, but he was enshrined there this summer.  That HOF career started in San Fran, where TO spent his first eight seasons, hauling in nearly 600 balls for 81 touchdowns.  That's just over 10 TDs for TO per season in SF.  He was drafted as Jerry Rice's heir-apparent and ended up being the other half of a deadly tandem for a few years while Rice stuck around.

6. Jerry Rice, WR (1998 Flair Showcase Legacy Collection Row 3)
Speaking of Jerry Rice, there is virtually no argument against his being the GOAT receiver of all-time.  How dominant was he?  He is #1 in receptions, 224 catches ahead of #2 Tony Gonzalez.  He is #1 receiving yards, almost 7,000 yards ahead of #2 Terrell Owens.  And he is #1 in total TDs, 33 ahead of #2 Emmitt Smith.  There are no words strong enough to describe that type of domination.

7. Patrick Willis, LB (2008 Leaf Certified Materials)
Patrick Willis only spent 8 seasons in the NFL, but he made the most of them.  The only season he didn't make the Pro Bowl was 2014, which was the injury-riddled year that ultimately forced him to retire.  Of those 7 Pro Bowl seasons, 5 were accompanied by 1st-Team All-Pro nods.  With respect to Brian Urlacher, Patrick Willis was the dominant middle linebacker in the NFC during his career.

8. Jimmy Johnson, CB (1972 Sunoco Stamps)
I have to admit, I didn't even know who Jimmy Johnson was until a couple of years ago, even though he has been in the Hall of Fame since 1994.  Johnson's entire career was spent in San Francisco, and whenever a player plays at a Hall of Fame level entirely for one team, it's hard to leave them out of the conversation of franchise's best players ever.  Johnson's career began before the Super Bowl Era criterion for this project, but his best stretch of years came just after the inception of the Super Bowl.  From 1969-1972, he reeled off four consecutive 1st-Team All-Pro nominations.  For his career, Johnson picked off 47 passes, scored on two of those, and recorded a safety.


9. Ronnie Lott, S (1991 Pro Set)
We've already got Joe Montana and Jerry Rice as possible GOATs at their respective positions.  Well, let's add another.  Granted the greatest all-time safety in the NFL isn't likely to garner as much attention as QB or WR, but Ronnie Lott certainly can stake a claim for it.  Lott took the league by storm in his rookie year, picking off 7 passes and taking 3 to the house.  (1981 was not a fun year for offenses, as Lott and Lawrence Taylor both started out that year.)  After moving to free safety full-time in 1986, Lott really started to have fun.  That year he led the league with 10 interceptions.  In the next five years, Lott was an All-Pro four times and a Pro Bowler for all of those years.  He ended his 49er career with 51 interceptions, 12 fumble recoveries, and 721 tackles.

While the Niners have ebbed and flowed since Steve Young retired, the bright stars in their history have been really bright.  This is one of the best 9-pocket pages in my binder.  But is there anybody missing?  Who else deserves consideration?  Let me know in the comments!
Posted by Trevor P at 6:05 PM