A couple weeks ago, Daniel from It's Like Having My Own Card Shop questioned his status as a team collector. He claimed to no longer be a team collector because he is no longer buying random D-Backs singles. P-Town Tom recently made a similar determination, requesting that collectors no longer send him blind trades of modern cards because he's changing the way he collects. And now, I've recently found myself straying from collecting my professional sports teams. Do I still enjoy adding Cubs and Packers to my collection? Of course! But when I go pick out singles to buy, I'm not at all looking for Cubs and Packers. I'm trying to fill set holes or make progress on one of my [too] many collecting projects. My wantlist on my blog says Cubs and Packers because I like people to include them in trades. But on TCDB--when I have to select specific cards to add to my wantlist--I'm more likely to add cards that aren't either of those two teams. Am I ready to say I don't collect Cubs and Packers anymore? No. But my current collecting goals don't include accumulating more cards of uniforms that I already have by the thousands in my collection. I'm totally content seeking out other cards and letting fellow bloggers remember to send Cubs and Packers my way in trade.

Kerry at Cards on Cards is one of those bloggers who knows that I like to receive Cubs cards. So when I recently placed second in his March Radness (side note: Why did you choke, Gonzaga? One more win and I had it!), he sent me a prize package that was full of Cubs, Cubs, and nothing but Cubs. 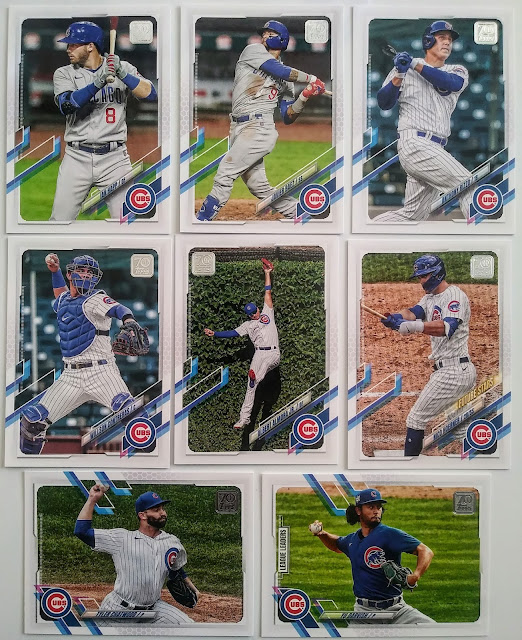 These are my first 2021 Flagship cards. As mentioned in my Opening Day post, I am in the minority who likes this year's design. Now seeing the cards with a foil "70 Years" stamp instead of the Opening Day logo, I like them even more. I recognize that the celebration of 70 Years seems unnecessary, but I like what the stamp adds to cards. Kerry provided me with almost a full team set of series one. Only David Bote, Jose Quintana, and Jon Lester remain unaccounted for. 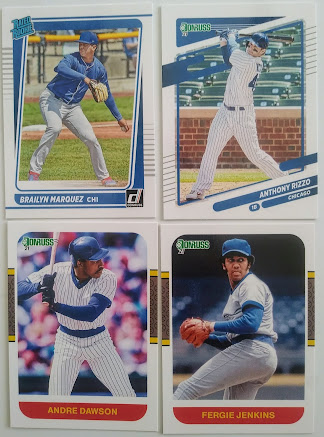 More 2021 that I didn't have. The only 2021 cards I had before this package arrived were Opening Day, so Kerry may have just taken care of me for the year. Typically, I don't care for Donruss, but these cards don't look too bad. I like the selection of players, too--some Cubs legends and my first Brailyn Marquez card. 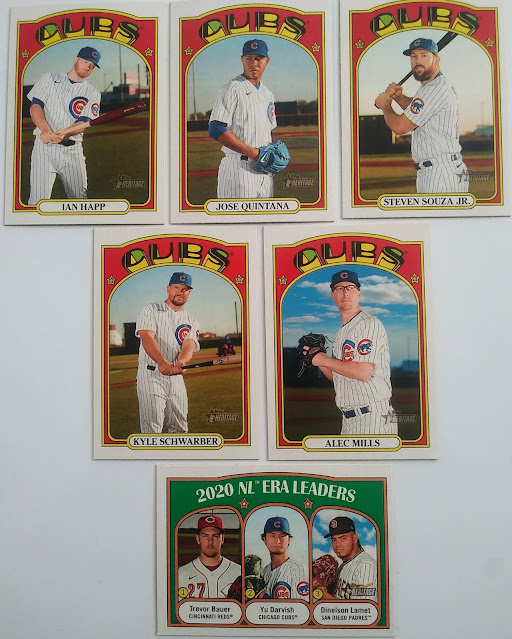 We're going to keep rolling with 2021, but 1972 style. These players sum up the Cubs this season: only Happ and Mills remain with the club. 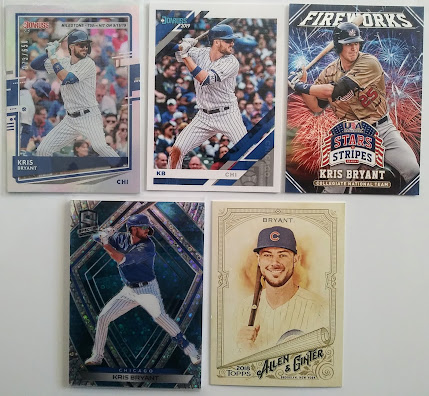 Kerry threw in some pretty nice cards of lame-duck former MVP Kris Bryant. Donruss Stat Line and Spectra are both serial-numbered. That also represents my first baseball Spectra card. There's also a nickname variation Donruss and a card that I was shocked to discover I didn't have already: Stars and Stripes Fireworks. 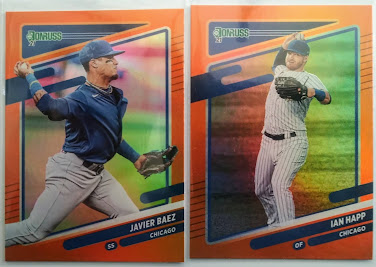 A couple more non-base cards. Both of these players still play for the team, so that's a plus. 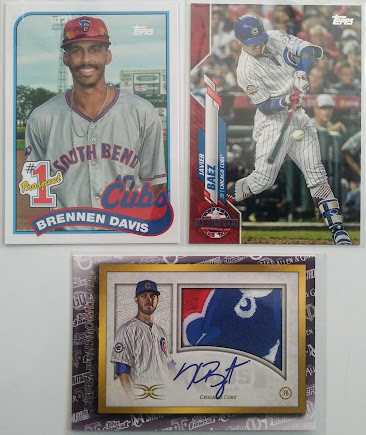 And some more inserts/parallels. At first glance, my heart nearly stopped because I couldn't believe that Kerry would gift me that auto-patch KB. It took less than a second to realize it wasn't real, but another Topps self-tribute. I'm sure more than one collector had a similar reaction to cards from this set when they were breaking packs open. 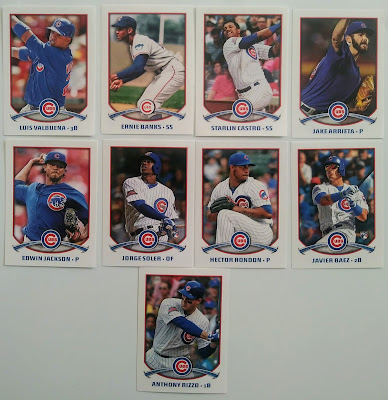 More than anything else he sent, Kerry provided me with stickers. These 2015 stickers include a Javy Baez rookie--if you can consider a sticker a rookie card. It bears the RC logo, but I'm not convinced. 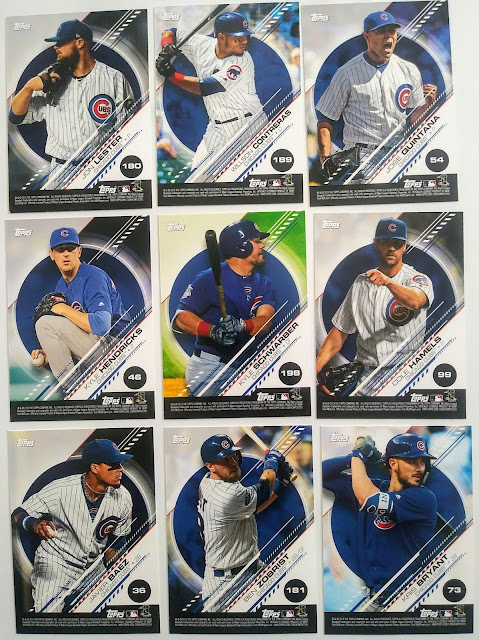 A couple years ago, Topps started making their stickers full card-sized. They came up with some pretty attractive designs, too. But here is why I often struggle with stickers. I think these are the card backs. There is another player on the front, using a different design and this side has the number. It just confuses me to have two different designs and players on opposite sides. 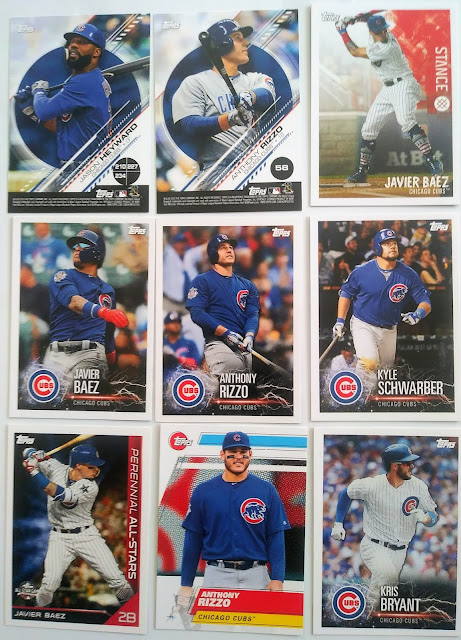 Javy, Rizzo, Schwarber, and Bryant are the front base design, I believe. I'm not sure what the Baez stance, Baez All-Star, or Rizzo are, but as I said, I like the look of all of these. They could be a good Topps Bunt design, in my opinion.

Most of the Cubs-themed prize package from Kerry was new to me. And considering that I don't expect to be opening any 2021 products or adding too many specific Cubs to my TCDB wantlist, or picking up random Cubs cards on the secondary market, I probably needed all of Kerry's offerings to add any of these newer things to my collection. I appreciate that he was generous enough to send them to me.