I've seen posts before where people show off gems in their collection they didn't know they had. It seems that somebody even once discovered a 2011 Topps Update Trout (or two, maybe?) in a box they had long forgotten about. I've never had such an experience. First, I don't have a high enough volume and quality of cards to have something tucked away and forgotten about. Second, I keep track of what I have pretty well and I look at my cards often enough that I usually remember them. The best I'd ever found was a 2001 Upper Deck Pat Tillman rookie. This one escaped my notice because A) it just came from a one-off pack I had bought after I graduated from high school and I wasn't collecting, and B) I had never heard of Pat Tillman at the time. I stored it in a box with a bunch of other cards and went on to my grown-up life, never thinking about it again. Years later, I thought it was a cool find when I reacquired my cards from my parents' house and learned it was selling for $20 or more. I never sold it, though.
That changed recently. I sold off the vast majority of my basketball collection, but a small 600-count box escaped my notice and remained with me. In that box, I found this: 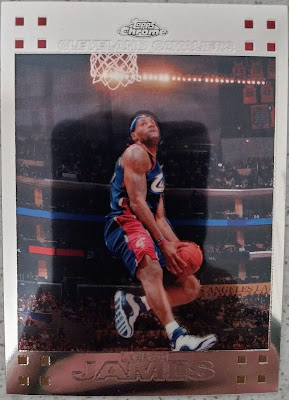 I have no recollection of where this came from. I wasn't collecting anything in 2007, let alone LeBron James. I'm thinking it must have come from a lot that I purchased. As such, I highly doubt I paid more than fifty cents for this bad boy. Combine that with the fact that this is a lowly base card, it never would have registered more than, "Cool. A LeBron," in my mind. But I came across it and checked out what the current craze has done to the price of this card. I was shocked by what I saw. Immediately, I placed it on eBay with a $.99 starting point.

One week and 20-some-odd bids later, it sold for $120. It's a base card! Not graded, not serial-numbered, not plated in gold or anything. The sale inspired me to place another LeBron I had up for sale because I didn't necessarily need it either. 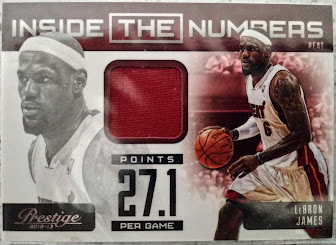 I do remember getting this one, pulling it from a pack of 2012-13 Prestige from one of the few boxes of basketball that I've purchased in my adult life. This one didn't sell for nearly as much as the Chrome LeBron, but I was glad to get a little extra spending money from a couple of cards that I barely remembered having and certainly didn't need.

Unlike when I have sold cards in the past, I didn't turn that money into more cards. I had other plans. You see, when we sold our house last summer, the kids' playhouse/swingset stayed in the backyard. The new house didn't have one, so I proposed to my wife that we should get a playset. I planned to put the money from the sale of these cards toward it. To my surprise, she was against the idea. Her reasoning was that our boys are at an age where they wouldn't use it much anymore and it was too expensive to justify buying it just for our youngest daughter to use for a few years before she grew out of it too. Plus, she argued, it would become infested with wasps. I countered that she is always begging to go play on a playground and there is only one park in town. We ended up deciding to get a swingset without all the bells and whistles--one that would be big enough for the older kids to enjoy, too.

But when my wife shot down the playset idea on the grounds that the boys were too big, I had a light bulb moment. I asked if she would object to a batting cage. And so, the money from my LeBron sales helped fund this: 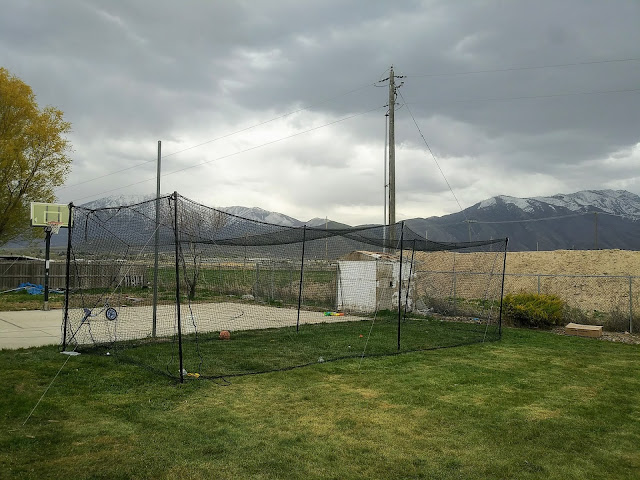 And now everybody in the house is able to get some swings! My boys are getting some reps outside of their regular little league practices, I've been out working on my golf swing, and even my five-year-old daughter wants me to pitch to her. (Though, to be fair, she wants me to push her on the swings even more.)

So have you found any new gems hiding in your collection lately? Though this is really the first time it's happened to me, I always love hearing stories about what new discoveries others make. Let me know in the comments if you've had any recent pleasant surprises in your collection.