'Twas the Week Around Christmas

And all over the yard,
The snow just kept falling while I received cards.
The flag on the mailbox was up in the air
In hopes for new cards in exchange for ones there.
And all through the week, while my kids' stockings were raided
I pulled from the boxes cards soon to be traded.
I found a few partners who traded with cheer
From TCDB and bloggers--what a way to start the New Year!
For the past few months, I have slowed down my trading. It has been a while since I sent out a trade package to a blogger and I averaged fewer than two TCDB trades per month since August. But in December I reached out to Matt and Dennis about some cards they had posted on their blogs. I worked out a trade with SCC and claimed some Christmas cards/Facebook haul stuff from Dennis and prepared a small return package for him. Then I used some of my Christmas time off to work on some TCDB trades. The result was that more cards came into my possession this week than any other time since summer. 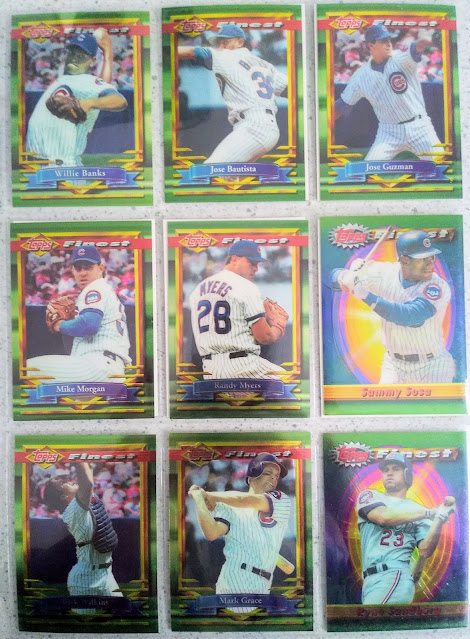 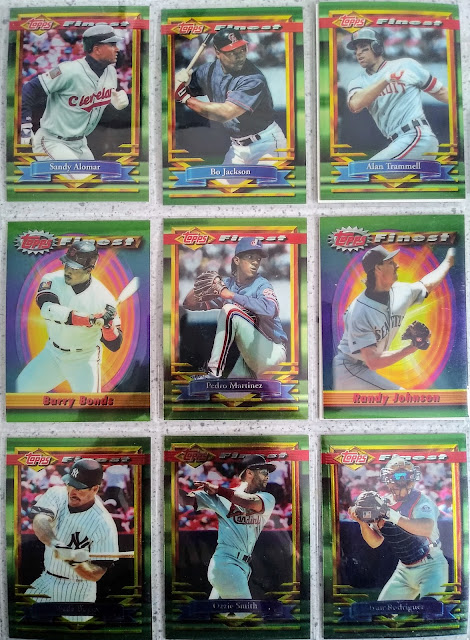 We'll start with Dennis, since his package was the first to arrive, just before Christmas. From him, I nabbed a partial set of 1994 Finest. I got about 72% of the set. Prior to this, I owned only 2 cards from this set, so building it wasn't even on the radar. But it's a pretty cool early-day chrome product and I definitely am going after the rest of it now. My other claim from Dennis was a complete 1996 Score set. I never bought a single pack of this when it came out and I only had about 10 random cards I added to my collection through the years. But going through the package that Dennis sent, I learned just how cool this set is. I love the color splashes with the plain white border. It contains loads of interesting photographs like these. The most famous of them in the online card world is the Bip Roberts sombrero, of course. 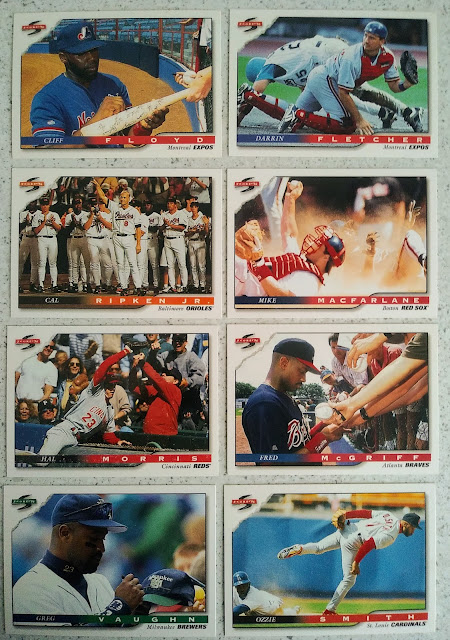 As I went through the cards, I made an interesting discovery: all of the horizontal cards are grouped together in the set. There are three strings of horizontals in the checklist (48-110, 321-337, and 395-413). Still lots of quirky photos. I love seeing all the signatures already on the Cliff Floyd bat. I will never tire of cards with Cal Ripken's Iron Man moment. And let's hear it for a couple of plays at the plate and Hal Morris going into the stands for a foul ball. 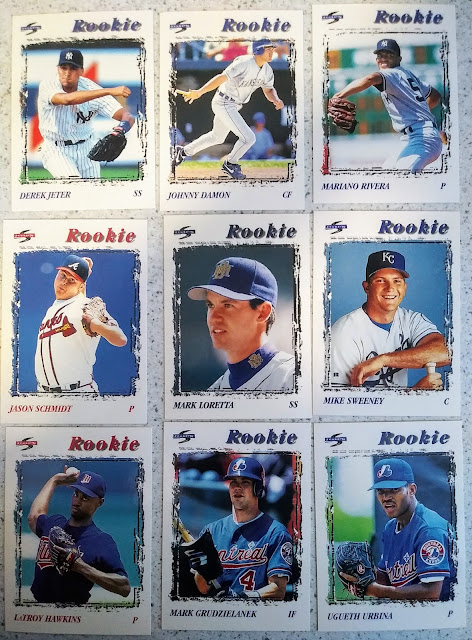 The Rookie series in the set doesn't feature actually rookie cards, but it does document some players' first taste of the Big Leagues. Here is a group of guys who had pretty successful careers. 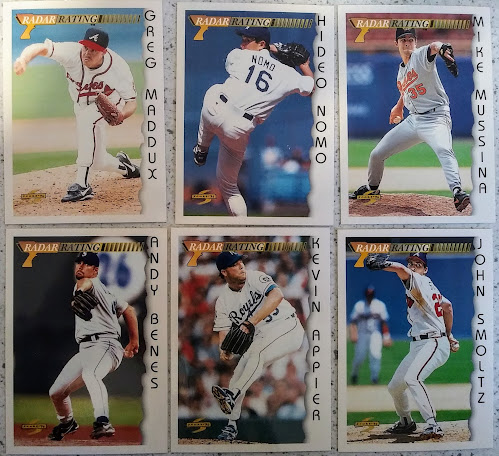 Each series had one subset. Series 1 selected some of the top pitchers in the game in the Radar Rating subset. Hurlers like Greg Maddux and Kevin Appier seem out of place on a subset that praises the fastest pitch recorded for the player. Most of these guys were in the low 90s, in fact. Now it seems that everyone throws harder than that. 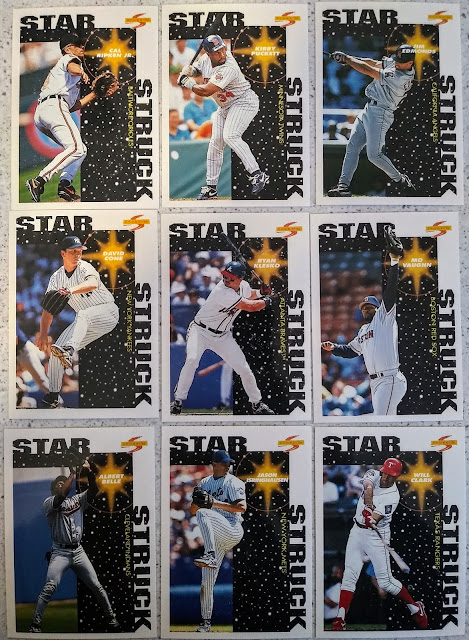 Series 2 had a subset called Star Struck. It's fun to look back at which players Score decided were the biggest stars of the day. 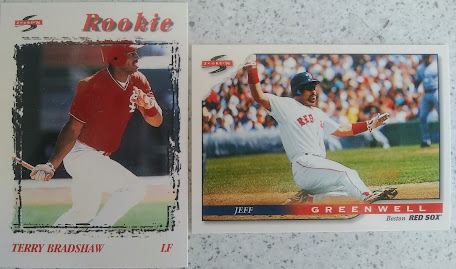 How about these familiar names? Terry Bradshaw was already in the Pro Football Hall of Fame when he started his baseball career, apparently. And who can forget Red Sox fan favorite Jeff Greenwell? 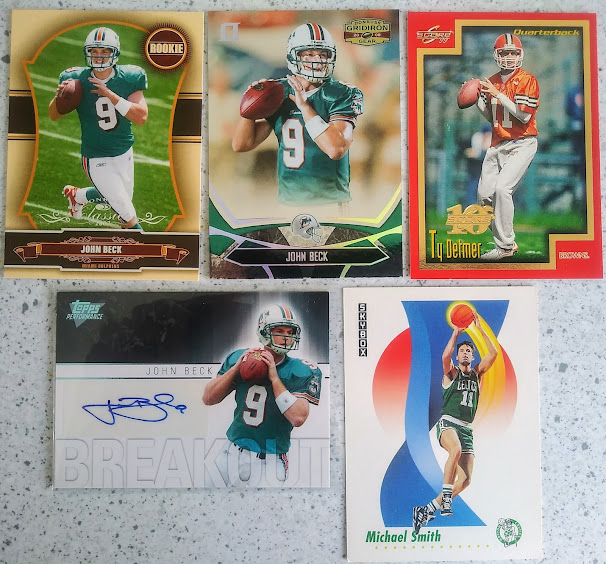 Dennis had a few former Cougars to send my way, too. There was nothing that I sent back his way to equal this, so I appreciate his generous offer to share the spoils of his massive Facebook haul. 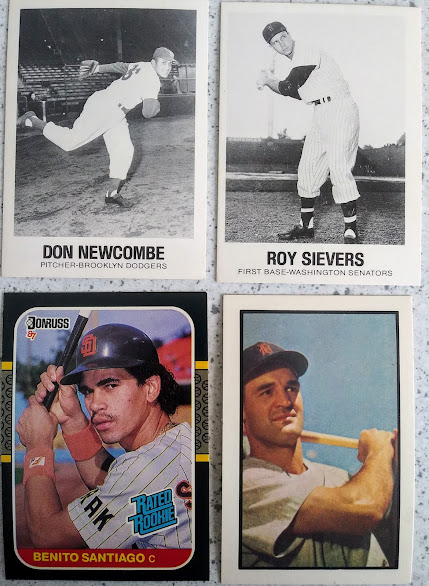 Next up is a TCDB trade with tullyelly. He is a Packer collector who was working on the 1995 Collector's Choice football set. I helped him out with both. In return, I picked up some ROY collection needs. The top two are Galasso Glossy Greats; Walt Dropo in the bottom right is from something called Card Collectors Bowman Reprints in 1983. 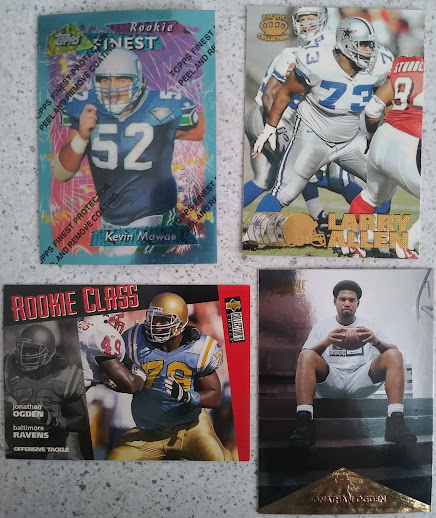 The trade also included some big men on the All-2000s team. 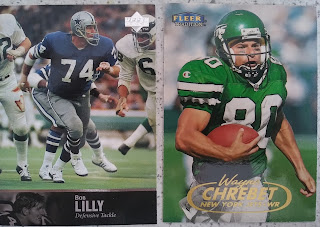 A couple of set needs. 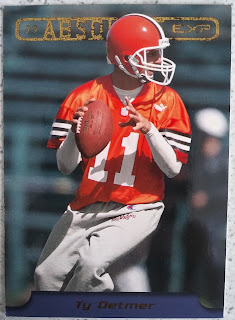 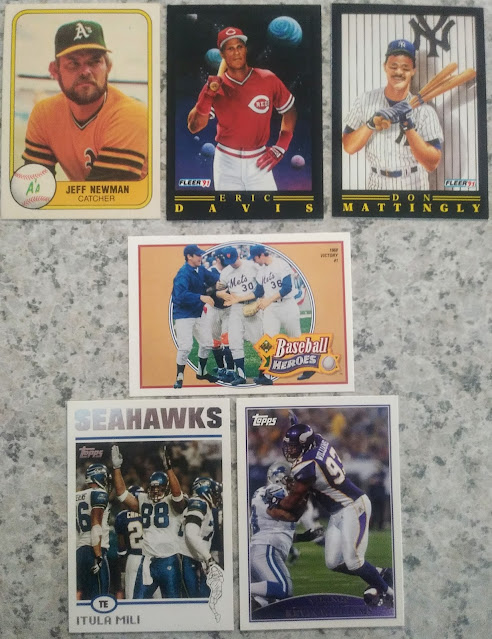 Then came another trade through the TCDB. This one was with Gatorade96. From the top, I have a card for my All-Star project, the last two 1991 Fleer Pro-Vision cards I need, the finishing card from Upper Deck Nolan Ryan Baseball Heroes, former Cougar Itula Mili, and All-Decade DT Kevin Williams. Pro-Vision and Nolan Ryan will be back in the next few weeks when I recap my completed sets of the year.

Not only these trades, but my November COMC shipping request arrived this week. It's far too big to put in this post, so I will write about it later.

I put off publishing this while I waited for some other trades to come through, but no others came through the mail before New Year's Day. So I don't have any other new cards to show. Between shoveling walks and driveways (we welomed two separate storms of 8-10 inches each this week), I stayed inside and managed to work out seven trades on TCDB that will start my 2022 off right.

Email ThisBlogThis!Share to TwitterShare to FacebookShare to Pinterest
Labels: Trade